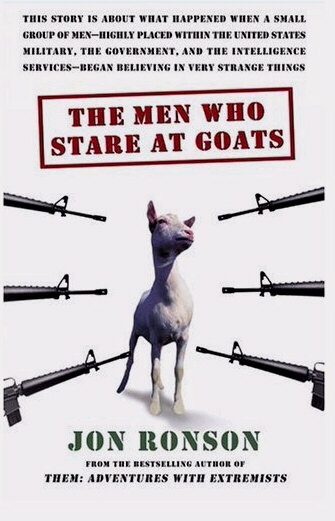 The Men Who Stare at Goats

According to Jon Ronson’s book The Men Who Stare At Goats, the U.S. government has experimented with various extra-sensory ‘abilities,’ such as remote-viewing and mind control, since the 1950s. These highly classified sub-divisions of the Army were developed in the hopes of creating a different kind of warrior, one who could harness mental abilities to destroy his adversary. Although many of these divisions were kept under wraps, journalist Ronson (known as Bob Wilton in the film) got wind of a low-profile Army project after having met Jim Channon, the former colonel who wrote a manual for the creation of the ‘First Earth Battalion,’ an army unit to based upon New Age principals. The book, which inspired the film, charts the absurd journey that began with this chance encounter. It contains a wild, often questionable, but ultimately fascinating story of introspection and destiny.

Channon (known as Bill Django in the film) is a war-vet turned peace guru played by the versatile Jeff Bridges, a role reminiscent of the wackier characters Bridges has played in the past, such as ‘The Dude’ in The Big Lebowski and Jack Lucas in The Fisher King. An advocate of peaceful alternatives to warfare, Django is put in charge of a small unit dedicated to developing paranormal combat techniques. His most gifted student, Lyn Cassady (played by an enigmatic Clooney) is pursued and eventually befriended in Baghdad by a young Wilton (played by Ewan McGregor). When Cassady reveals his mission to Wilton, the two team-up and set off on a series of adventures. Wilton feeds off of Cassady’s neurotic behavior, and both characters are able to find clearer paths to their destinies with each other’s help. The story shifts back and forth between past and present, a technique deftly exploited by rookie director Grant Heslov and talented screenwriter Peter Straughan, who aimed to preserve as much of the story’s alleged authenticity as possible. Much of the film is a vehicle for Wilton’s introspection, and the ways in which he learns more about himself and his destiny. Along the way we discover more and more about the First Earth Battalion through Cassady’s wild stories, which are truly weird, especially since most of them really (well, maybe) took place. The title, for example, comes from an experiment Cassady was forced to participate in; after having stared at a goat for several minutes, the poor animal fell to the floor dead (a cinematic effect achieved by using a special breed known as “Fainting” goats). Top-notch, diverse performances ensure the movie’s effectiveness, with each character significantly different in personality and style. Kevin Spacey rounds out a star-studded cast by playing Larry Hooper – the ‘Judas’ of the group, if you will – Django’s mean-spirited ex-student, whose mission is to sabotage his arch-nemesis, Lyn Cassady. The jealousy and spite towards his more gifted colleague is often brilliantly portrayed by Spacey’s deadpan reactions, and the various encounters between both characters are the highlights of the film.

Director of photography and Clooney right-hand man Robert Elswit (There Will Be Blood, Syriana, Magnolia) uses the beautiful New Mexico backdrops to his advantage and the editing is flawlessly executed by Tatiana Rigel (Lars and the Real Girl, Jackie Brown).

I’ve always been a sucker for a movie that’s based on a true (-ish) story and I was quite impressed with Heslov’s effort with this film. I left the cinema with a huge grin on my face and a strong desire to read Ronson’s book, a feat not often achieved with movies these days.