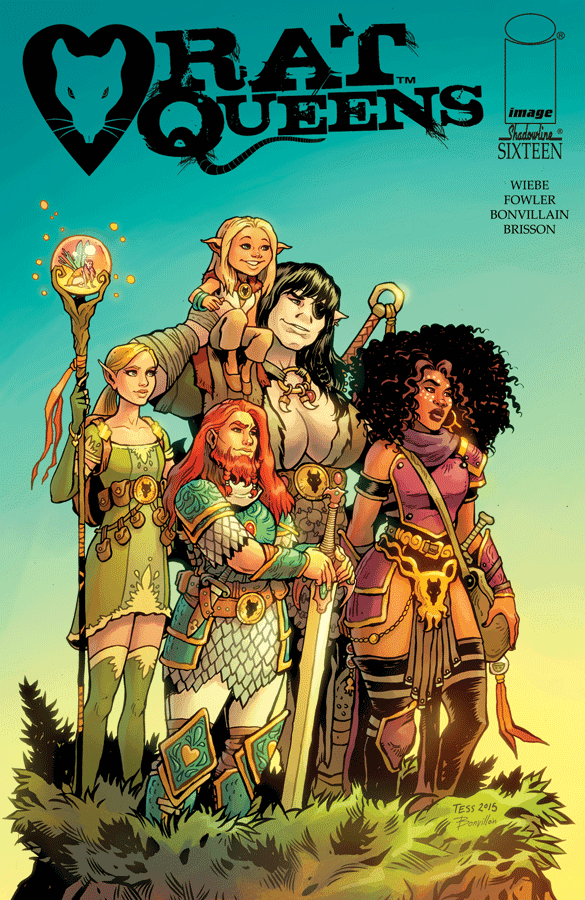 Rat Queens #16 brings our Rat Queens (minus Hannah) back home to Palisade, except the town has gone to hell in a handbag. The townies hide as groups of adventurer-mercenaries crowd the Testy Unicorn Inn, waiting for their chance to prove they’re the next big heroes, and getting into drunken brawls in the meantime. The Queens return to a puffed up reputation; they’re now the Heroes of Palisade, and everyone–from the traveling chronicler (not a bard!) to estranged family members–want a piece of them. Kurtis Wiebe presents a raucous romp as the women find that coming home brings no sense of comfort.

This issue gives the series a reset after the deep upheaval of the “Demons” arc. Hannah is absent, tucked away in the Mage U version of the Phantom Zone, and her friends have no idea how to rescue her. The Queens are attempting to move on by returning to Palisades to reconnect (for sex!) with those they left behind and perhaps find new direction. Reunion is the watchword, and the three seek out or are sought by the familiar and unexpected. The relocation of Violet’s brother to Palisade likely inspires the new arc’s title: “When Beards Collide.”

The sweetest reunion is Violet’s with Dave. Tess Fowler’s art with Tamra Bonvillain’s brilliant colors gives Dave’s recognition smile a joy and exuberance that reverberates off the page. It is swoon-worthy.  However, he has changed, imperceptibly at first, but noticeably as Violet continues to resume their intimacy.  And even this happy reunion holds a twist, one that closes the issue with shock and awe. Knowing that the series is going on a hiatus after this issue makes the cliffhanger extra effective. 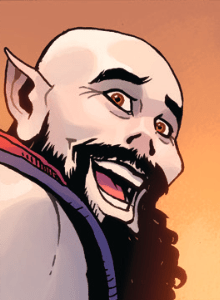 In the midst of all the reunions, the issue explores that familiar notion to anyone who has traveled away from their origins: You can’t go home again. It’s not a matter of geography, but metaphor. Both you and home have changed in your time away. That has created distance, perspective. Often home feels small after travel away. Palisade has moved on in the six months the Queens have been gone. They’ve been hoisted onto a pedestal as the stories of their heroics grow, and would-be adventurers have taken their place, grasping for glory. The marks of home are all around them in the buildings and reunions with friends and family, but even that which looks the same is, when unwrapped for deeper scrutiny, becomes monstrously foreign.