Home
Entertainment
The New Yorker Presents, Ep. 1.01: “Pilot” is the most interesting premiere in recent memory
Prev Article Next Article 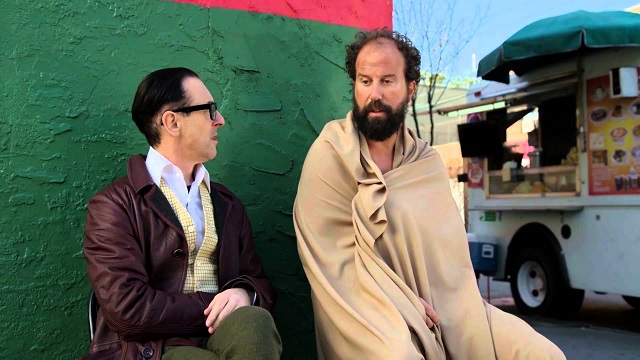 Of all the recent pilots released by Amazon, The New Yorker Presents is easily the most interesting. A half hour smorgasbord of content, this first episode is completely fascinating in terms of its form and what that could mean for both Amazon’s original series and television in general going forward.

The conceit of The New Yorker Presents is simple: a little bit of this, a little bit of that. This first episode contains a short film, a conversation/interview with an artist, a short documentary and a recorded performance of a poem. The ultimate success of a series like this is similar to that of a sketch comedy in that episodes and individual segments will be hit or miss week-to-week. Obviously, the goal becomes bringing together a collection of talent that is of a high quality and that mesh well within any given episode.

My experience with the pilot was one of progression in engagement. The short film features Alan Cumming (The Good Wife) and Brett Gelman (Eagleheart) in a comedy skit about God trying to use the character played by Gelman to get the word out about the coming apocalypse. Both performers are genuine talents otherwise, so the unremarkable idea and writing of the skit is elevated enough to be mildly amusing and an effective opening for The New York Presents. The conversation with artist Marina Abramovic, conducted by New Yorker writer Ariel Levy, immediately turns the episode into something fascinating. Both the conversation and the documentary, directed by Oscar-winner Jonathan Demme (The Silence of the Lambs), are instructive and thought-provoking. Abramovic’s art pieces dealing with connection and pain are presented in a beautiful manner, while Demme’s documentary about a biologist and his battle against a company called Syngenta is moving and manages to feel so full and complete in such a short amount of time. Finally, Andrew Garfield (The Social Network) reading Matthew Dickman’s poem “King” rounds out the episode in perfect fashion. As someone who attends poetry readings regularly, I was struck by how thoroughly Garfield’s reading felt genuine and unrehearsed.

So on the one hand, yes, these different pieces end up creating something that is even better than their sum. But the real success of The New Yorker Presents is in its form, which has a ridiculous amount of potential. As mentioned, there isn’t really too much that separates something like this from a sketch comedy show, but what The New Yorker Presents allows for is various talents coming together to complete a product each week, much like how many literary journals feature an array of talent centered around a theme or idea. That the series could veer between scripted and unscripted content makes it even more interesting, pushing it into Louie territories of innovation if done effectively. Of course, this comes down to The New Yorker and the kind of content it wants to put out, but if this first episode is any indication of the magazine’s vision, there should be no problems keeping things interesting. There’s also a sense of storytelling IQ added by the pilot transitioning between segments with illustrated cartoons that are featured in The New Yorker. The whole thing just works on the structural level, and the short length of the segments leave the viewer wanting much more once the episode concludes.

What could be another potentially interesting aspect of The New Yorker Presents is how Amazon would choose to release it. The studio’s first two series, Alpha House and Betas, received multi-episode premiere days followed by weekly additions to round out their seasons. Transparent, on the other hand, dropped its season all at once. The New Yorker Presents actually eschews both of those models naturally, fitting more comfortably into a weekly concept, and I could see myself making this appointment viewing because of the insanely high ceiling it could have depending on which talent is brought together each week. In any case, and to be frank, Amazon would be dumb to not pick this up. The New Yorker Presents is anything but a traditional television series, but the qualities that give it that description are also the ones that make this one of the best pilots in recent memory, on Amazon or otherwise.