Home
Entertainment
The Man in the High Castle, Ep. 1.01: “Pilot” presents a world with long-term potential
Prev Article Next Article 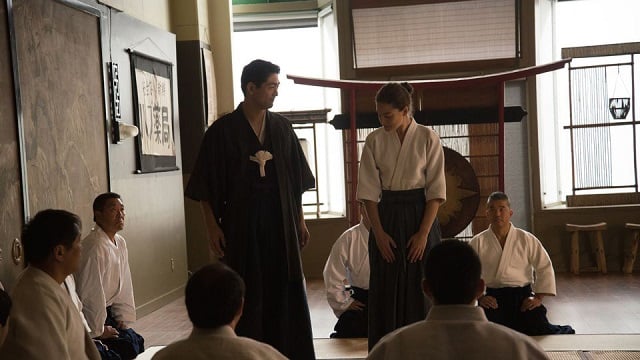 The Man in the High Castle, Season 1, Episode 1: “Pilot”
Written by Frank Spotnitz, based on the novel by Philip K. Dick
Directed by David Semel
Released January 15th, 2015 by Amazon

For fans of Philip K. Dick, The Man in the High Castle will have undoubtedly already been on their radar for quite some time. Dick’s fiction has been adapted into several acclaimed films, including Blade Runner, Minority Report and A Scanner Darkly. In this recent batch of Amazon pilots, Frank Spotnitz (The X-Files) adapts The Man in the High Castle with the vision of turning the source material into a full television series. Those unfamiliar with Dick’s written work need only know that his interest is in science-fiction and that the worlds he creates are generally immersive, vast, and intricately planned-out.

In that regard, The Man in the High Castle is a success. I’ve always thought that the first thing genre television ought to do is make its world feel lived in. Characterization and adequate storytelling are obviously huge concerns when trying to draw in an audience, but if a high-concept series can bring its world to life for the viewer, then the primary objective has been accomplished. Veteran TV director David Semel does a fantastic job examining all the nooks and crannies of what life is like in this alternate world in which Germany won World War II and the United States has been taken over by German forces in the east and Japanese forces in the west. The coloring isn’t as bleak and oppressive as it could have been, which is actually a huge plus, since the more vibrant scenes that take place outside of the cities really pop. The production values and technical prowess of the episode’s few bits of action and tension are also deftly handled, making The Man in the High Castle excel at bringing Dick’s vision onto the screen for an hour.

The premise is also immediately engaging. Though this story certainly would have fared much better several years ago before the  premiere of smart spy thrillers like The Americans, the alternate history that The Man in the High Castle presents is a classic tale of good versus evil as perceived by American values. When your villains are Nazi Germans, there’s not much more in terms of conflict that needs to be established.

Unfortunately, the protagonists of the story feel utterly bland and a huge part of that has to do with the surprisingly stilted performances and the script’s lack of flair. The central characters played by Alexa Davalos, Rupert Evans, and Luke Kleintank are totally forgettable beyond the one or two minor details that define them. Thankfully, elements like the score and camerawork pick up some slack during the exposition, but if The Man in the High Castle goes forward, this is the area that will need to improve, and quickly. The antagonists wind up being a little more interesting (Rufus Sewell, in particular, is solid and convincing as John Smith), but they also tend to chew the scenery.

That said, Amazon’s pilot season is all about testing the waters and seeing what has the potential to become a success. The Man in the High Castle certainly benefits from Dick’s pedigree, along with a slew of highly respectable producers (including Ridley Scott). Genre fans will probably be a little more forgiving of some of the pilot’s blandness in the character department and given Spotnitz’s work on The X-Files, this seems like an obvious fit to find its feet over time. The Man in the High Castle is definitely one of the highlights of this batch of pilots from Amazon and is worth investing the time in for those at all curious or intrigued by the premise.