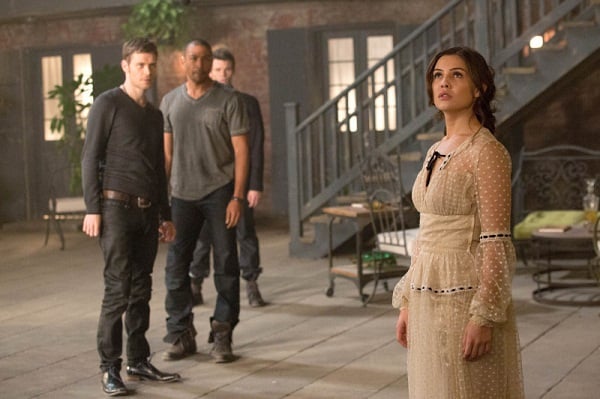 The Originals, Season 1, Episode 10, “The Casket Girls”
Written by Charlie Charbonneau and Michelle Paradise
Directed by Jesse Warn
Airs Tuesdays at 8pm EST on The CW

On this week’s The Originals, Davina attacks the vampires, Camille breaks her compulsion, Rebekah protects her fellow females, and Sophie teams up with Hayley.

With half of a season down (and a full season pick-up), The Originals returns in “The Casket Girls” with overwhelming–and well-earned–confidence. This show clearly knows what it’s doing now and is settling into a tight, swiftly-moving groove.

Though unnecessary, the opening flashback and corny voice over serve to set up the episode’s overarching theme–females, and their need to look after one another. This is a male-dominated world and arguably a male-dominated show, but that doesn’t mean the females (all who are distinguished from one another by their various nuances and characteristics) are content following the men.

Also, most notably, the most powerful character on the show is not the immortal vampires, but rather a young female witch, as “The Casket Girls” reveals.

Actually, every leading female on the show–including the often-absent Sophie Deveraux!–is given her due in “The Casket Girls,” and the involvement of the entire cast in a single episode is a welcome and refreshing change of pace. With such a great troupe of actors, it’d be a shame for the show to consistently neglect anyone, especially Sophie and Camille, who are often shafted story in favor of the vampires.

Initially (and still) about family, The Originals is quickly turning into a show about humanity–funny, since there are less than a handful of fully-human characters on the show–in all of its forms. No true heroes or villains exist (yet–though it often seems otherwise), and the characters are very human in their dealings with friends and family and lovers and enemies. They’re motivated by human desires like greed, lust, love, power, etc. This complex core of humanity differentiates the show from other supernatural dramas more than any other quality it possesses.

But, enough about the characters–let’s talk about the show’s visuals. The set is, as always, gorgeous and artfully crafted, especially the church. Oh, and the scenes taking place in downtown New Orleans are incredibly lovely and spot-on–it’s hard not to get swept up in the Bourbon Street party while watching. Directer Jesse Warn nails the party shots, swooping headfirst into the colorful chaos for over-the-crowd and in-the-crowd shots. Very nicely done.

Another nice new touch is the yellow, slightly blurred tint shown when magic is occurring. Now that the witches are (finally!) capable of using magic, the new visuals that fill the screen, especially where Davina’s concerned, are a beautiful addition.

Lastly, music supervisor Chris Mollere makes it easy to rave about the show’s music, as he always picks songs that amp up the mood of each scene, especially the final cliffhanger. Since the show’s beginning, he’s done a consistently great job handling the show’s unique musical requirements.

Honestly, “The Casket Girls” is easily one of the show’s best episodes, and this is incredibly reassuring, given that it’s only the beginning of the season’s second half. The set-up at episode’s end looks promising, and the story seems to be moving at a fairly-balanced pace–an excellent achievement for a show only in its freshman season.