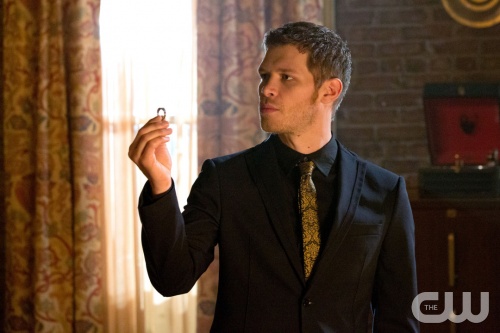 On this week’s The Originals, Elijah struggles to keep the peace in New Orleans, Klaus busies himself with painting and a redheaded witch, Hayley breaks her family’s curse, Davina heals, and Marcel quietly plots his return to power.

Sad as it may be, “The Originals” is showing no sign of stumbling following the loss of series regular Claire Holt (Rebekah Mikaelson). If anything, the story’s tighter than it’s been in weeks, and everyone is given a purpose in the episode. Though light on the action, “Moon Over Bourbon Street” is a promising beginning to the season’s final chapter.

Mirroring the first episode nicely, “Moon Over Bourbon Street” is mainly a bridge to reacquaint the audience with the city following Marcel’s banishment and the Mikaelsons’ total takeover. Watching Marcel inhabit the underdog role is intensely satisfying, largely because he’s always been a more rootable hero than Klaus. Plus, he’s already proven to be a much more cunning and subtle plotter than Klaus could ever dream of being. Even out of power, Marcel easily remains one of the show’s best, and strongest, characters.

Meanwhile, the meat of the episode essentially involves the new supernatural politics in New Orleans. Sure, this sounds dull, but it’s actually incredibly interesting and entertaining to watch–particularly when it delivers moments like Hayley’s confrontation of Elijah at the Mikaelson house party. Like Marcel, Hayley’s one of the show’s strongest characters, so it’s great to see the show giving her a bigger role following the loss of Holt. And seeing the various supernatural heads bicker over power is just funny.

Unfortunately, not all is excellent within the episode. New characters Jackson and Francesca are more irritating than integral to the unfolding plot; they feel like filler characters who hopefully won’t have a very long stay in the French Quarter. Francesca seems to exist solely to flirt with supernaturals in power (namely Elijah), and it’s beyond annoying. Jackson, however, does have potential to be a bigger, if not better, character in the future, though his blonde lackey (whose name is too insignificant to remember) should be shown the door.

This episode feels darker than the rest, perhaps because Claire Holt’s Rebekah was a very positive and hopeful character, whereas her siblings are not, and the tone shift is subtle but pleasant. “The Originals” has always seemed like the darker twin in comparison to “The Vampire Diaries,” so the change in tone fits.

Everything else is relatively the same–the sets are gorgeous, the music is excellent, the actors and actresses are brilliant, etc.

Though Claire Holt will be missed, this new chapter in “The Originals” is already exciting and brimming with positive potential.