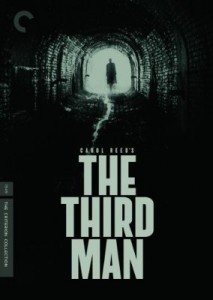 When I sat down to begin writing this, the first thing I did was try to search for an explanation for why it has taken me so long to sit down with The Third Man. I thought about blaming it on time, but that doesn’t work because I’ve had plenty of it. I tried to piece together a number of reasons for me to dislike Orson Welles, but that would mean me deceiving not only you, but also myself. I went through explanation after explanation before finally settling on one: I haven’t seen The Third Man because…well…I just haven’t.

But after doing so, I’m most certainly kicking myself for not doing anything about it sooner.

The Third Man is a well-crafted noir tale of murder and morality that takes us along a winding and path, and just when we think we’ve gone as far as we can go, an even more winding path reveals itself. It’s a film that tells a story that feels like it could go anywhere at anytime, and there’s never any doubt that whatever move they choose to make will be a smart one. But is it really so simple?

No, it isn’t. There is so much in The Third Man that deserves praise; it’s near impossible to figure out where to start. I suppose the logical starting point would be talking about the film’s director, Carol Reed. Reed really is a bit of an unsung hero in the filmmaking world. He’s been at the helm of many finely crafted films over the years, but people tend to know more about what went into the film and seemingly nothing about who put it there. But if ever there was a time to pay attention to him, it’s with The Third Man. This is a film that dares to make bold choices, from a laid back opening narration right down to an unconventional score. But it’s a good fit, because if nothing else it gives you a message for what’s about to follow: expect the unexpected. Though at times it seems to teeter on the edge of silliness, Reed manages to keep it from ever falling over. But you can’t praise Reed’s work on it without giving even a brief mention to his cinematographer, Robert Krasker (another unsung hero of sorts, but aren’t most cinematographers?). The bold choices continued into the very photography of the piece, with Krasker opting to work heavily with techniques that weren’t widely used at the time, like backlighting and Dutch angles. It’s a visual style that reflects not only the mystery, but also the skewed reality within the film’s Vienna, Austria. It never truly looks normal, because the story ever is normal.

Helping the top-notch work by Reed and Krasker are some good performances. In the leading role, Joseph Cotten provides a wonderful moral struggle, but still manages to inject a healthy amount of wit and charisma into it. And Alida Valli is a good fit for the fairly traditional but still interesting female lead. But the stand out, without a doubt, is Orson Welles in quite probably the best role of his career, as the mysterious Harry Lime. His screen time is limited and his dialogue mostly consists of one very memorable speech, but as the catalyst within the film his very essence hangs over every frame of it. It feels like you’ll see him peaking out from a corner if you concentrate hard enough, and it does wonders to drive along the main conflict. In fact it’s entirely possible to draw comparisons to his earlier performance as Charles Foster Kane. But his physical entrance into the film has been hailed as one of the greatest and most memorable ever created. It really is a struggle not to spoil a single bit of this film for those who haven’t had the pleasure of seeing it, but it’s a moment that will undoubtedly stick with you for ages. Simply put, I don’t feel like I could have truly called myself a film fan until last night. The Third Man is a textbook, a collection of what’s wonderful about being involved in filmmaking in any way, condensed to a roughly two-hour runtime. It never falters or drags itself out or becomes too heavy-handed in its tone or presentation. It merely exists to impress, over and over again. No amount of accolades is enough.