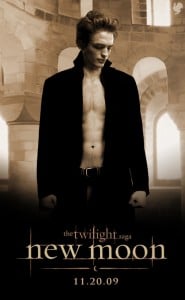 Are we to expect more from a feature film than from an average episode of a daytime soap? That’s one of many questions to be begged not only of casual moviegoers but of even the most hardened fan of Stephenie Meyer’s socially negligent Twilight series as they take in the latest installment of what’s sure to be a tortuously long series. At 130 minutes, New Moon rivals Jim Jarmusch’s Limits of Control for sheer uneventfulness – and even that movie had the good sense to kill off a character.

Taking place some months after the first, the film opens on Bella (Kristen Stewart) dreaming creepily of her boyfriend, centenarian-by-way-of-19 vampire Edward (Robert Pattinson), courting her dead grandmother – promising a more interesting movie, wherein we delve into the creepy, dependent nature of the entire relationship. Instead, Edward and the rest of the pale Cullen clan decide to leave town permanently after a sudden reminder of he and his family’s threat to Bella’s life. So, to recap: the vampires remember they’re vampires, have a crisis of conscience, and scram. Plot!

After two months spent pining (demonstrated in one of the movie’s few directorial flourishes of any kind, however yawnsome), werewolf Jacob Black (Taylor Lautner) enters the picture, and sorta sweeps Bella off her feet – hence, the movie spends well over an hour on their almost-courtship, as Bella tries to conjure ways to bring Edward back and Jacob saves her life a few times. The werewolf aspect of the film is easily the most entertaining, bringing to the fold as it does wolf battles, inappropriate levels of shirtlessness (at which no one seems to bat an eye – the werewolf thing is supposed to be a secret, right?), and an even less appropriate racial aspect: the wolves are all First Nations, and are depicted as buff, forest-dwelling savages, compared to the lily-white sophisticates the movie calls “vampires,” who take residence in a swank mansion and drive luxury cars across Europe. Twilight, as a film series, is an artistic no man’s land that renders useless all who enter it, except as occasional, unwitting providers of high camp. Chris Weitz (About a Boy) showed surprising aptitude for big-ticket fantasy with The Golden Compass, but his work here is mostly indistinguishable from the much-derided first installment, barring some improved CGI, which is doubtless the result of a beefier budget. Kristen Stewart is a capable actress with real presence when it’s allowed (Adventureland), but is still trapped here in a thankless, powerless role as a perpetual damsel in distress waiting to be scooped up and rescued by one of her handlers – Bella might be one of the least active protagonists in movie history. Even well-established players like Michael Sheen and Dakota Fanning can barely register here, as they’re relegated to bit parts, doubtless to be given more screentime in some future debacle. The only one allowed to chip in even a little self-awareness is Anna Kendrick, who’s about to impress many with her sterling supporting work in Up in the Air.

More significant than New Moon‘s crimes against plotting and talent, however, are its trespasses on the literary tradition of romantic tragedy (to say nothing of its tiresome wussification of vampires) and what that says about the phenomenon as a whole. In early scenes that sample liberally from Romeo and Juliet, the film – and the series’ progenitor, Stephenie Meyer, by extension – seems to suggest commonality between them, which is beyond ludicrous. In Juliet, our titular couple’s tireless efforts to come together take a real human toll on two families. Here, the universe itself bends to accommodate Bella and Edward’s creepy brand of love – even the oddly benevolent council of vampires – and no one (besides the petulant werewolf) thinks to complain. New Moon helps cement the Twilight series as the Bible of self-absorption.