To call “Mulder and Scully Meet the Were-Monster” ridiculous is not to be disparaging of the episode, but to acknowledge the incredible breadth of styles the series has. In the same way that fans are divided in preference between mythology and monster-of-the-week installments, The X-Files diehards also have leanings towards certain kinds of tone. The series has never settled on one, allowing its writers to explore mystery, drama, thriller and comedy elements set against the sci-fi backdrop of the premise. There are very serious episodes of The X-Files that involve supposed monsters. This is not one of them, and it succeeds more so than the first two episodes of the season because of a commitment to being entertaining in its own way.

The were-monster of the title immediately misleads viewers as it does Mulder and Scully, instead proposing a different kind of monster: one that turns into a human intermittently after being bitten. It’s a cute idea, but writer/director Darin Morgan really goes to town on it psychologically. When a person turns into a wolf at the full moon, animalistic instincts take over. So, what happens when an animal (an ancient lizard, in this case) turns into a human? The primal instincts described are so on-point that it’s impossible not to make it through the episode without laughing: the need to secure a job, the body’s requirement of morning coffee, tendencies to exaggerate one’s sex life. These are the things that Guy Mann (Rhys Darby) experiences in his human state. Some viewers might balk at the fun “Were-Monster” is trying to have, but it’s not just fun. 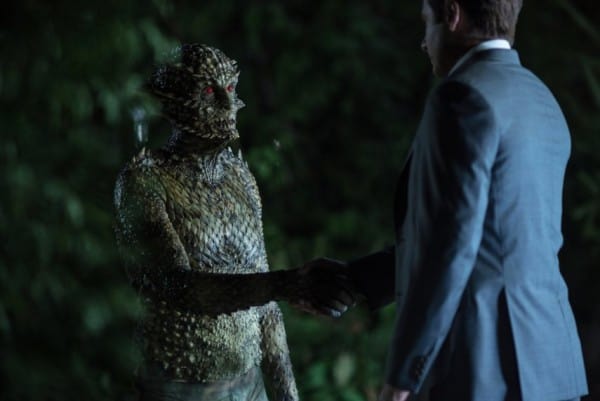 “Were-Monster” is also a deep, metaphorical dive into Mulder’s emotionally fragile state after having returned to his job and experiencing utter disillusionment. All the phenomena that captivated him in years past have been explained in the most disappointingly simple ways (ice; the answer to one case was litearlly ice). “Were-Monster” gives Mulder a chance to work through his self-doubt and, ultimately, find his purpose in life again. We all die–the psychologist and Mann both remind Mulder about this–but “Were-Monster” doesn’t let fleeting moments of happiness surrounded by crushing loss and grief be its final word on the day-to-day of being human. Mulder and Mann’s conversation eventually leads them both to consider that, by letting go of the idea that there are things that can’t be explained, humans succumb to worries, regret and loneliness without a light at the end of the tunnel. The experiences of “Were-Monster” are exactly what Mulder needs to avoid going down the route and to find his motivation for doing what he does again.

This is, I think, what makes a fun episode of The X-Files more than just simple entertainment. There is a version of “Were-Monster” that settles for animal-turns-into-man and throws it into the series’ structural formula. But by beginning with Mulder in limbo and going pseudo-philosophical in the graveyard story, the episode finds another gear. That core is surrounded by tons of humor, too: Mulder not being able to figure out contemporary technology (although, he’s managed to get an X-Files ringtone), Mann’s Scully fantasy (which is, let’s face it, a huge portion of the fanbase’s fantasy as well) and perfect one-liners (“I don’t think that that dude’s okay”; “They think I’m on crack.” “Are you?” “Yeah!”; “Now, please go away, or I’ll kill ya!”). Even the edges are pretty rounded, with the costuming of the monster being both absolutely silly and satisfying in its practical aesthetic.

There are some aspects of the episode that could have been altered or explored better, of course. The Peeping Tom of the motel is kind of just ignored on the criminal level. And Kumail Nanjiani (who plays the actual killer and has a wonderful backstory in terms of how he found himself onto The X-Files) isn’t used as prominently as one might hope, especially considering the tone of the episode really plays into his comedic styling. These, however, are minor gripes with what is otherwise a return to a form of The X-Files. It’s certainly the best of the three episodes so far, and it recalls to mind how well the show can do parody. Now, some fans need to see that these episodes can also nail the dramatic beats. Going ahead, the second half of the miniseries (which is airing out of production order) has some obligation to be that sci-fi series that explores these sociological ideas in ways that challenge Mulder and Scully in more serious (for lack of a better word) ways. Comedy is easy when the thing being shown is so easy to make fun of; making us believe again is the challenge.