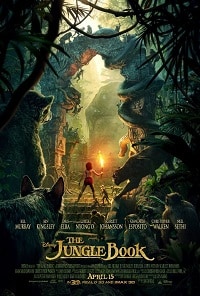 The Jungle Book
Written by Justin Marks (from the book by Rudyard Kipling)
Directed by Jon Favreau
USA, 2016

Thanks to the assured vision of director Jon Favreau, some inspired voice work by an all-star cast, and enough action to dwarf the latest superhero movie, The Jungle Book is the Mad Max: Fury Road of family-adventure films.  Scene after glorious scene combines thrills and humanity in equal measure.  While this is largely a serious treatment of the children’s classic, Favreau still infuses Mowgli’s journey with plenty of fun.  The Jungle Book is an embarrassment of visual riches that thoroughly entertains on every level.

Few films these days can claim to be visionary.  Family films, in particular, are in a frenzied race toward mediocrity.  To see Jon Favreau take so many chances, then, is truly inspiring.  Not all of these chances work, particularly when he shoehorns two iconic musical numbers from the 1967 animated adaptation into a film where they simply don’t belong, but he can easily be excused for his audacious trespasses.  From something as insignificant as tiny rain droplets dangling from a wolf’s fur, to a mudslide roaring down a mountain precipice, the filmmaking is delicate and exacting.  It’s the kind of ambitious spectacle that can turn casual young moviegoers into lifelong cinephiles. 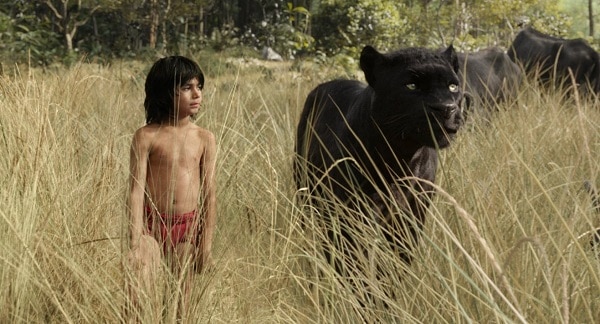 The familiar story of Mowgli the man-cub (Neel Sethi) has been re-hashed countless times for film and television, with decidedly mixed results.  Sethi is the sole live-action inhabitant of a CGI forest filled with enchanting critters.  We have the noble panther Bagheera (Ben Kingsley), who found an infant Mowgli orphaned in the forest and delivered him to a wolf pack led by the courageous Akela (Giancarlo Esposito) and the nurturing Raksha (Lupita Nyong’o).  There is the bumbling Baloo (Bill Murray), a lazy bear who will stop at nothing to satisfy his honey hunger, even convincing an impressionable Mowgli that jungle bears actually hibernate.  And there is the fearsome tiger Shere Khan (Idris Elba).  Scarred by a Human many years ago, Shere has a personal and philosophical score to settle with Mowgli, and he’ll kill anyone who stands in his way.

Favreau and his screenwriter, Justin Marks, take a few liberties with Rudyard Kipling’s familiar stories, mostly to inject some pizzazz (and action) into the conclusion.  Their decision makes perfect sense given the more dramatic and fantastical tone of their piece.  Mowgli and his protectors are in real jeopardy here; a fact that very young viewers might find a bit too intense (aside: Two children at my screening cried during the opening chase sequence).  Though much of the magic of Reitherman’s 1967 animated classic has been preserved in the lavish set pieces, this is most certainly not your father’s Jungle Book.  Favreau pushes CGI and motion capture technology to the limit to produce, arguably, the most seamless blend of flesh and fakery that we’ve ever seen. 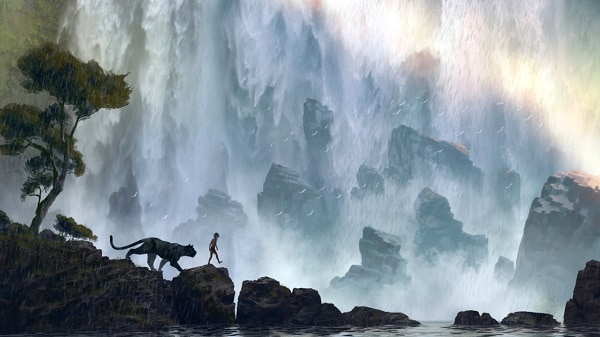 It’s unlikely that Kipling’s flair for fable or allegory would impress fidgety modern audiences, but there’s just enough meat on the thematic bone to make this incarnation of The Jungle Book sufficiently weighty.  Though there are tests to be passed and lessons to be learned, Favreau takes everything on the run.  Central to the conflict are still Mowgli’s “tricks” as a human that meddle with the natural balance of the jungle; the keeper of the “red flower” is to be both revered and feared.  Mowgli doesn’t find his proper place in the world so much as learn to control his true nature until it can save the day.  Call it an assimilation of convenience for all parties.

One mark against Favreau’s interpretation is his insistence upon including the more whimsical elements of Reitherman’s standard.  More to the point, the two major musical numbers, “The Bare Necessities” and “I Wanna Be Like You (The Monkey Song),” are woefully misplaced and tonally awkward.  By the time Murray starts crooning about Baloo’s personal philosophies, you’ve long abandoned hope for a musical interlude.  Walken’s song as a gigantic orangutan obsessed with fire is even stranger; serving no purpose to the greater story beyond a clever homage to Brando’s bloated Kurtz from Apocalypse Now.  There’s nothing wrong with the renditions, exactly, but they add neither levity nor substance to the greater story.  They simply happen and then we move on. 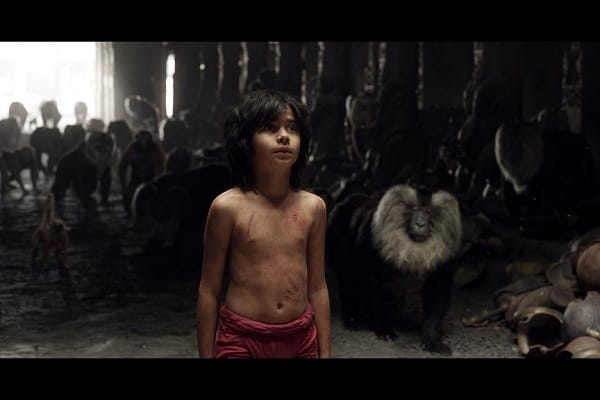 The voice work here is first rate.  Particularly wonderful are Kingsley as Mowgli’s ferocious protector and Elba as his sworn enemy.  Each sounds familiar while still stretching themselves to play a particular role.  Murray does fine playing himself, basically, and Scarlett Johansson is suitably beguiling as the python Kaa.  Little Neel Sethi holds his own with the digital cacophony.  He’s cute, but not overly saccharine; precocious without being a spitfire.  More importantly, he doesn’t disappear when the action starts and the spectacle engages.

And what spectacle there is!  This jungle literally teems with life, both on the ground and in the trees.  Favreau and his visual effects crew don’t simply create set pieces… they create an entire world that exists beyond the boundaries of their film.  The Jungle Book has been adapted many times before, but never on such a large (or thrilling) canvas.  Purists may bristle, but there’s no denying the immersive adventure that Favreau has created.  Sometimes bigger is, indeed, better.