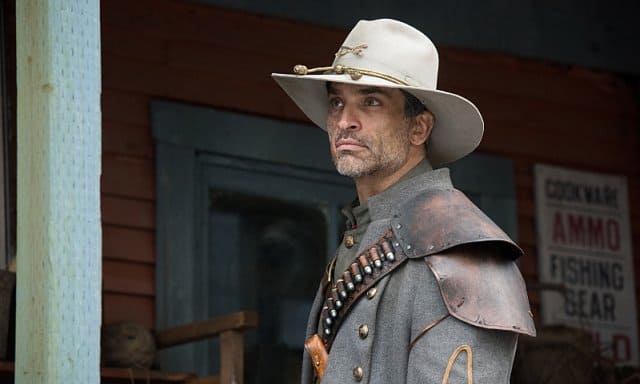 The Legends go back to the Wild West in a sweet, mostly effective episode that continues the series’ run of stronger episodes since the March 3 “Marooned”. “Marooned” launched both the Chronos plot and led into Ray, Kendra, and Sara being stranded in the 50’s: both developments have led to dramatically increased interpersonal conflict and development on the team, providing some drive and necessary emotional heft.

“The Magnificent Eight” introduces an iconic DC character, Jonah Hex, a hardbitten, cynical bounty hunter and gunslinger known in the DC universe equally for his ferociously scarred face and unbending personal code of honor. This is only the second appearance by the character in a live-action project – the first being the 2010 film starring Josh Brolin. Jonathon Schaech brings Jonah alive on Legends with verve and vim. The episode establishes an important connection between Rip and Jonah: Rip spent a great deal of time here in the 70’s because he met his wife Miranda here, and he and Jonah became close friends. This is the origin story of Rip’s duster and laser revolver, and he named his son Jonas after his friend.

Rip spends much of the episode on the ship hiding out from Jonas, due to a difficult choice he had to make in the past as a Time Master, which brought into focus an interesting fact: that episodes are, by and large, better the less Rip is featured. This is mostly due to Arthur Darvill’s continually weak performance (a huge disappointment to any Doctor Who fan, by the way), but the character writing does him no service – Rip is often the whiny, controlling counterpart to the rest of the team’s more light-hearted or direct approaches.

“The Magnificent Eight” sets up and works through a series of classic Western tropes: the town of Salvation, Dakota, where Jonah lives, is under besiege by the dreaded Stillwater gang, a female saloon maid with a heart of gold needs help, and a bar-fight breaks out in the first 10 minutes. It’s all very, very fun, and Ray unexpectedly steps up as the leader in this time period, taking on the mantle of town sheriff. It is disappointing not to see Sara take a more active role, since of all the team except perhaps Mick, she seems by far the most natural fit for the era, and the most comfortable in it – Kendra marvels at her friend’s easy joy in this time period. Leonard does shine a little, doing most of the heavy lifting when it comes to sharpshooting.

Delightfully, the episode features not one but two classic standoffs between armed groups in the center of town; in the first, a threat from Ray as newly-minted sheriff and a warning shot from Leonard on a nearby roof drives off the Stillwater gang, and in the second, Rip proves fastest on the draw in a gun duel with Jeb Stillwater, and kills him. There’s a surprising number of deaths by crooks in this episode – Legends often in the past has skirted the issue of whether or not those who come under the Legends’ fire actually die – but not so in this episode. Snart early on kills an aggressor in the saloon, Rip kills Jeb, and Mick kills at least one of the Hunters. It’s a refreshing change of pace that seems to signal the show’s willingness to raise the stakes in recent episodes. 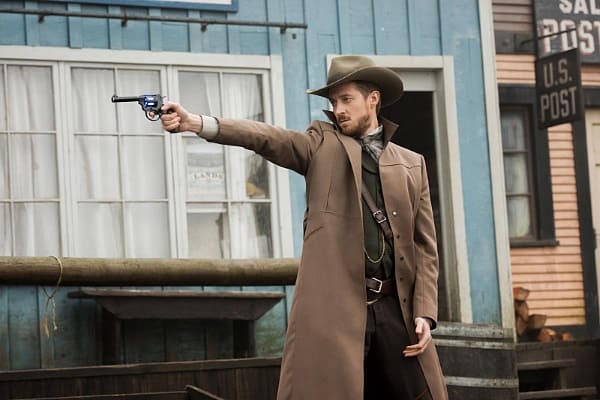 While this is going on, two B-plots occupy Dr. Stein and Kendra and Sara. Dr. Stein uses anachronistic medicine to save the saloon maid’s tuberculosis-stricken boy. This is a somewhat affecting storyline, but gives rise to several romantic-esque moments between Stein and the maid, which are uncomfortable given that Stein’s wife is still very much alive back in present-day Central City. Kendra pursues a mysterious woman she met in town, while Sara tags along, and the two women have some sweet bonding.

Their easy, unexpected cameraderie is a highlight of the episode, though Kendra’s quest is a somber balance to the rest of the episode, in that she finds out that her relationships with anyone not Carter seem to always end in tragedy in her own history. Ciara Renée has clearly settled into comfort with her character, and continues to tap unexpected depths of emotion and resolve with Kendra. While it might have been easy to see this plot as dragging down an otherwise fun, fast-paced episode – and the transitions between the rest of the team and the two women’s quest are slightly jarring – it unfolds a complex set of uncertainties and possibilities for Kendra and for Kendra and Ray’s future, which will play out over the rest of the season/series.

Closing on a high note of action, the team quickly and efficiently takes down the three Hunters who appear after the Rip/Stillwater duel, with an impressive display of strengths from the entire team, though Mick and Firestorm in particular shine. While slightly disappointing to see the promised Hunters completely ineffective against the Legends’ powers, it’s clear they were something of a bait-and-switch to set up the next, more important threat out of time: The Pilgrim, the Time Master’s most dangerous assassin. She is set to hunt and kill the younger versions of the Legends, and the next episode will see them on a desperate quest to protect their vulnerable prior selves.

A strong episode that spans action across gunfights, group battles, and bar fistfights, that delightfully plays with genre tropes and showcases a strong introduction to Jonah Hex (who fits in well both with the team and the town). There’s something stirring about seeing the figure of comic-book legend (pun intended) standing alongside the Legends. Look for the next episode to draw out new depths from each character as we, and they, come face to face with their childhoods.

Every episode sacrifices one character to the temporary hell of having absolutely nothing to do, and it’s Jax’s turn in this episode, though really it has been for several episodes.

This episode passes the Bechdel test.