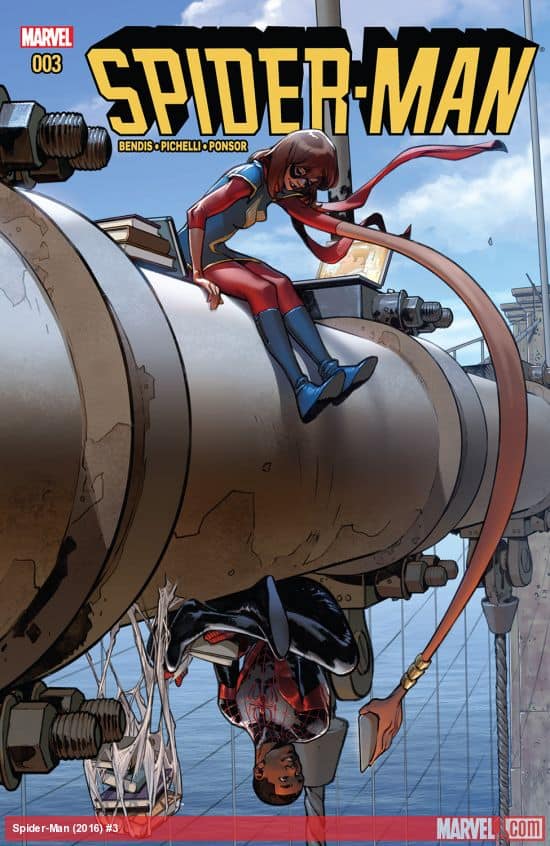 In an issue picking up immediately after last issue’s shocker that involves Miles Morales expanding family crashing down around him, the reader and Miles are given a change to catch their breath and prepare to discover Miles next greatest challenge: His Grandmother, Gloria.

Bendis has put Miles through the ringer before in the form of Venom, Evil Corporations, being a member of both the Avengers and Ultimates, and most recently a full time school student while juggling the All-New, All-Different Avengers. It’s almost standard Marvel Hero code: You won’t be able to handle being a hero and maintain your school standings. We’ve seen it before, but Bendis makes the struggle between Miles, his father Jefferson, and his Grandmother all the more hilarious and heartfelt.

The issue rings true for anybody in school that fell off the streak of great grades, and who else but a stern family member to get you on the right path again? The issue doesn’t even feature Miles going Spider-Man mode despite some initial urges from Ms. Marvel. It’s definitely a quieter issue to plot out how both the normal person and superhero lifestyles will get more complicated. Ever since Superior Spider-Man, Black Cat has been on the climb back to prominence and more so in this title. She gets a couple of pages to air out her concerns with another classic Spider Villain and it’ll no doubt be a major plot point in the issues to come.

Sara Pichelli and Justin Ponsor, after two issues of fights and larger than life characters, are dealt with delivering art that focuses more on the emotional range of human interactions. All of the characters are drawn throughout accurately and tempers can flare as they tend to do with family. Both Pichelli and Ponsor capture these moments perfectly. The range they have for character body types is on display when Ms. Marvel flexes her size in an attempt to get inside Miles’ bedroom window. The art team hasn’t lost a beat when it comes to making a group of people diversified. The panel range is even stretched during Black Cat’s “meeting.” It works wonders to accommodate Bendis giving us lots of dialogue to chew on.

Justin has mastery over using his colors to help accentuate any given scene, and it’s never been better here. A good portion of the issue takes place at night with minimal lighting; the characters are all bathed in the right amount of dark shades. As far as realistically drawing and showing characters in comics goes, this art team is second to none. Everyone in Miles’s world has their own flare thanks to the team they make the book worthy of being on the stands outside of Bendis turning the young Spider-Man into a household name that is.

Only three chapters in and Spider-Man is balancing the life of Miles and his Alter-Ego greatly. Bendis is breaking new ground with adding to his family and throws in a fan favorite from his Uncanny X-Men run to make things even more interesting than they already are! Spider-Man #3 lightens up on the action but keeps us reading for the interactions between the various characters and the new sandbox Miles is traversing.