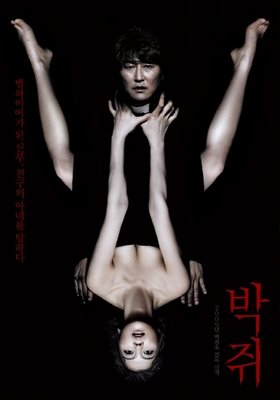 Friday July 10th marked the North American premiere of Thirst at Fantasia, Park Chan-Wook’s latest effort. Mostly known for his Vengeance Trilogy, Park has created a movie that is even more stylistically polished than his previous films, if you can believe that.

Thirst is immaculately shot and cleverly punctuated with scenes that would easily offend the Christian coalitions of this beautiful country. With that being said, what I most enjoyed about the movie was its acting. The lead characters (Song Kang-ho, a staple in Park movies and Kim Ok-bin) are extremely screen-friendly and believable; they complete each other so well that I could have sworn they had made previous movies together, yet Kim was appearing in a Park production for the very first time. The supporting cast was splendid as well, and I must admit that I was incredibly pleased with the plot twists brought on by Park later in the movie; they allowed his entire cast to shine in quasi-equal amounts. I am especially reminded of the old mother whose eyes stole the show in my opinion… As far as vampire movies go, there’s nothing revolutionary here in terms of storyline, and I wasn’t expecting as much. Many people I spoke to complained that they lost interest further into the movie as Park wheels his way from plot to plot, but I found it interesting and in fact, it kept me glued to the screen. Song plays a demoralized, troubled priest who is fed up with the suffering in the world and who finally volunteers to participate in an extremely risky experiment to find a vaccine for a deadly virus. Although he is infected he recovers quickly and realizes that he must feast on human blood in order to quash the recurring symptoms of the virus. To make matters worse he is inexplicably drawn to a friend’s wife and this is where the movie really takes off. The combination of fear, love and brute emotionality really captivated the crowd during our viewing, so much so that the woman sitting in front of me went through the full spectrum of emotions in a little more than two hours!

An absolute lack of predictability made this movie really special. Nothing that happened was ever expected and I commend the director and his staff for producing such a fresh story – the script was especially wry (the humor ‘lighter’ than his previous films) and that South Korean je-ne-sais-quoi is captivating whether you’re a fan or not. There were many moments when I initially thought laughter was inappropriate but in hindsight, I was wrong. It was a beautifully crafted movie with actors who were able to draw us into their world and mesmerize us with their incredible ability to feature different human emotions. My only gripe would have to be the extent to which certain scenes were shot; for example, a hospital sex-scene that doesn’t really go anywhere had me looking at my phone every couple minutes but overall, Thirst truly deserved the Jury Prize at this year’s Cannes Film Festival (it tied with Fish Tank actually). If you’re a Park Chan-Wook fan you absolutely have to get this in your hands as soon as humanly possible!