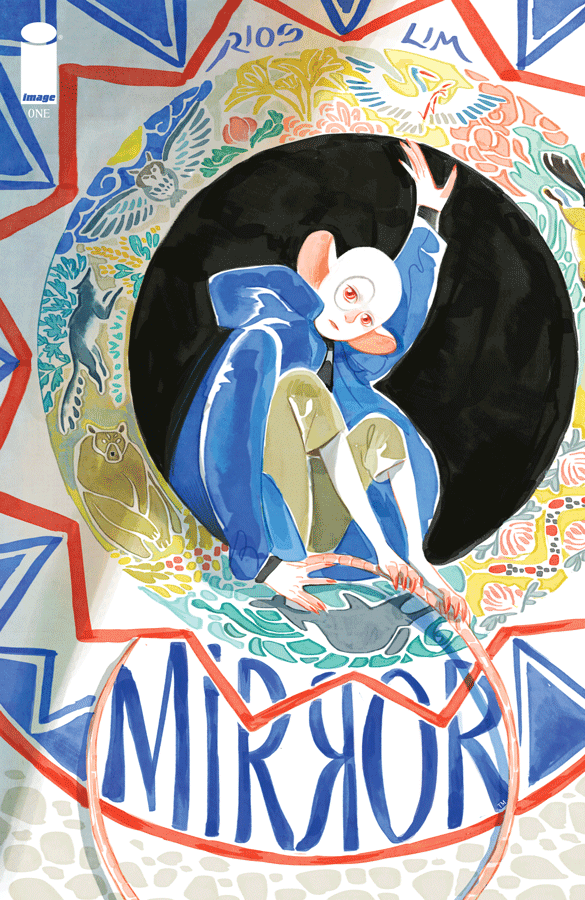 Lewis Carroll was famous for making up words, most notably in the poem “Jabberwocky.” One of those words is mimsy, which Humpty Dumpty explains to Alice in Through the Looking Glass is a portmanteau for miserable and flimsy. But I’ve always thought it was a mash-up of miserable and whimsy, and this error refuses to right itself in my brain. It is this meaning I kept mentally attributing to Mirror, which shares its use of looking glasses, transformations, plays for power, and talking animals with Carroll’s famous sequel.

The story centers around a boy, Ivan, who is the ward of a magician named Kazbek and is to be trained in magic himself. His dog Cena is the subject of magical experiments by Kazbek that over time give her human qualities including the ability to speak and, eventually, love. That love is seen as an abomination, and the two attempt to run away together, only to be apprehended and separated as Cena escapes into the wilderness. That early part of the story is mirrored with the state of things about 30 years later, when Ivan is a talented magician still under the watchful eye of Kazbek. Kazbek has now succeeded in creating a minotaur, a sphinx, and a talking lab rat, and has been attempting to reproduce the creations ever since. Ivan finds Kazbek’s work immoral and strikes out against him. Mirror #1 sets the stage for an emotional journey where Ivan, Cena, and the other human-animal hybrids fight for dignity and freedom.

Mirror makes a tremendous first impression through Hwei Lim’s watercolor artwork. From cover to cover, it has the luminosity of stained glass. The impressionism produced by the watercolors gives the story an aspect of fairy tale fantasy, an apt pairing for the narrative whose magically produced anthropomorphic characters call to mind the forest guardians of Princess Mononoke, the rats of N.I.M.H., and, yes, the creatures of Wonderland. The fantasy human-animal hybrids along with the watercolors’ translucence creates the whimsical quality. 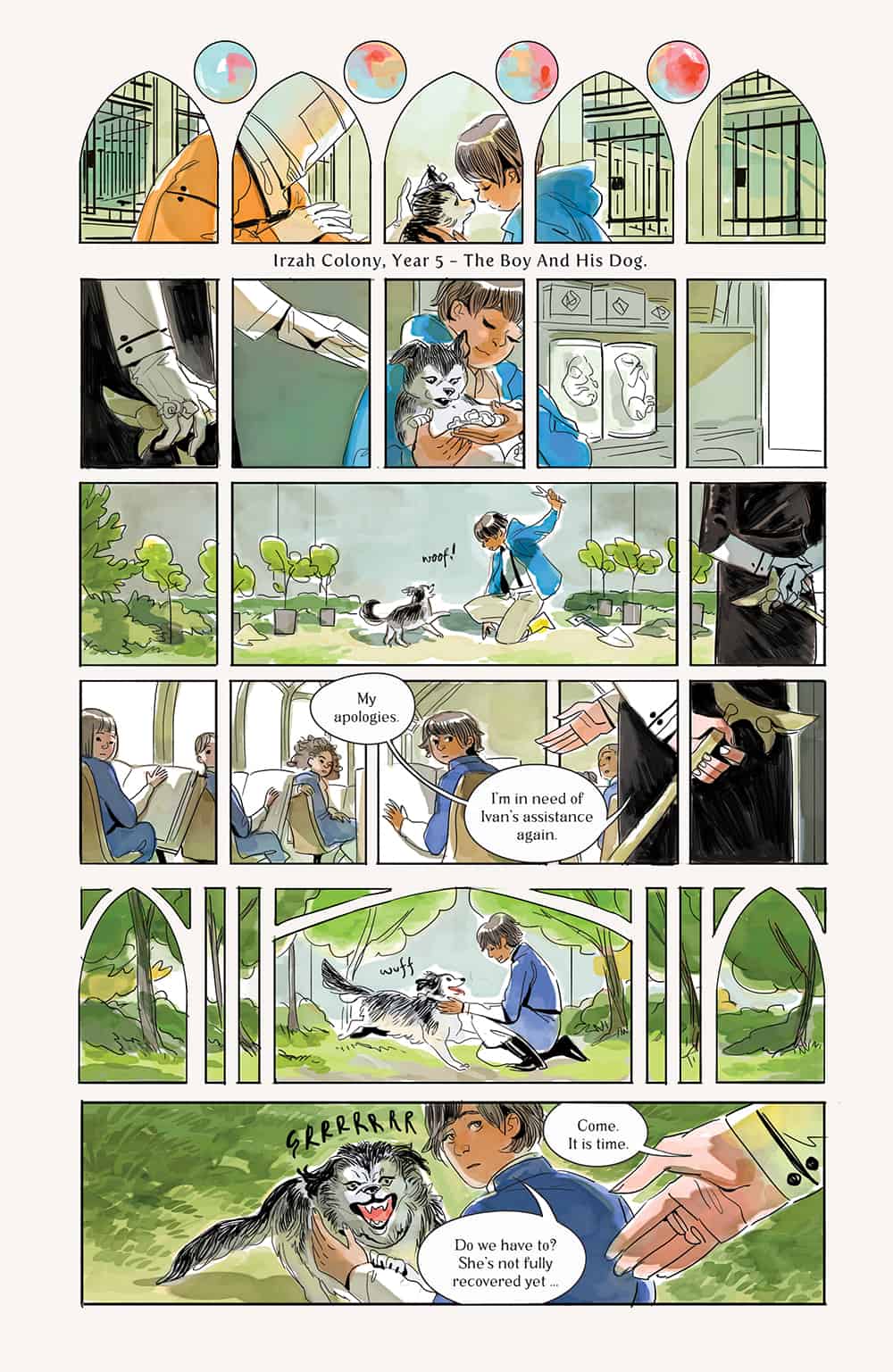 Adding to the effect is a playfulness of frame. The panels are often framed like mirrors we are scrying into to read the story. At other times the frame’s scrying surface is created by a liquid like spilled tea. Occasionally the characters brilliantly break free of the frames, as when the lab rat, Zun, captures a spider. But the frames also emphasize the misery within the story, building directly on the suffering of the various characters. The frames are sometimes mirrors of each other, emphasizing the two sides of this story, the conflicting motivations of protagonists Ivan and Cena with antagonists Kazbek and Elena. Though the two are introduced in conflict, enough information is presented about Kazbek’s reasoning to create a starting sympathy. Both parties work toward an end to suffering, but are focused on different paths. The creativity of framing shows that Lim and Ríos, who also illustrates, trading off with Lim in the backstory that finishes the issue, truly understand the form. They show that advanced understanding through the flexibility of technique, in the same way James Joyce does in Ulysses, by breaking the rules. 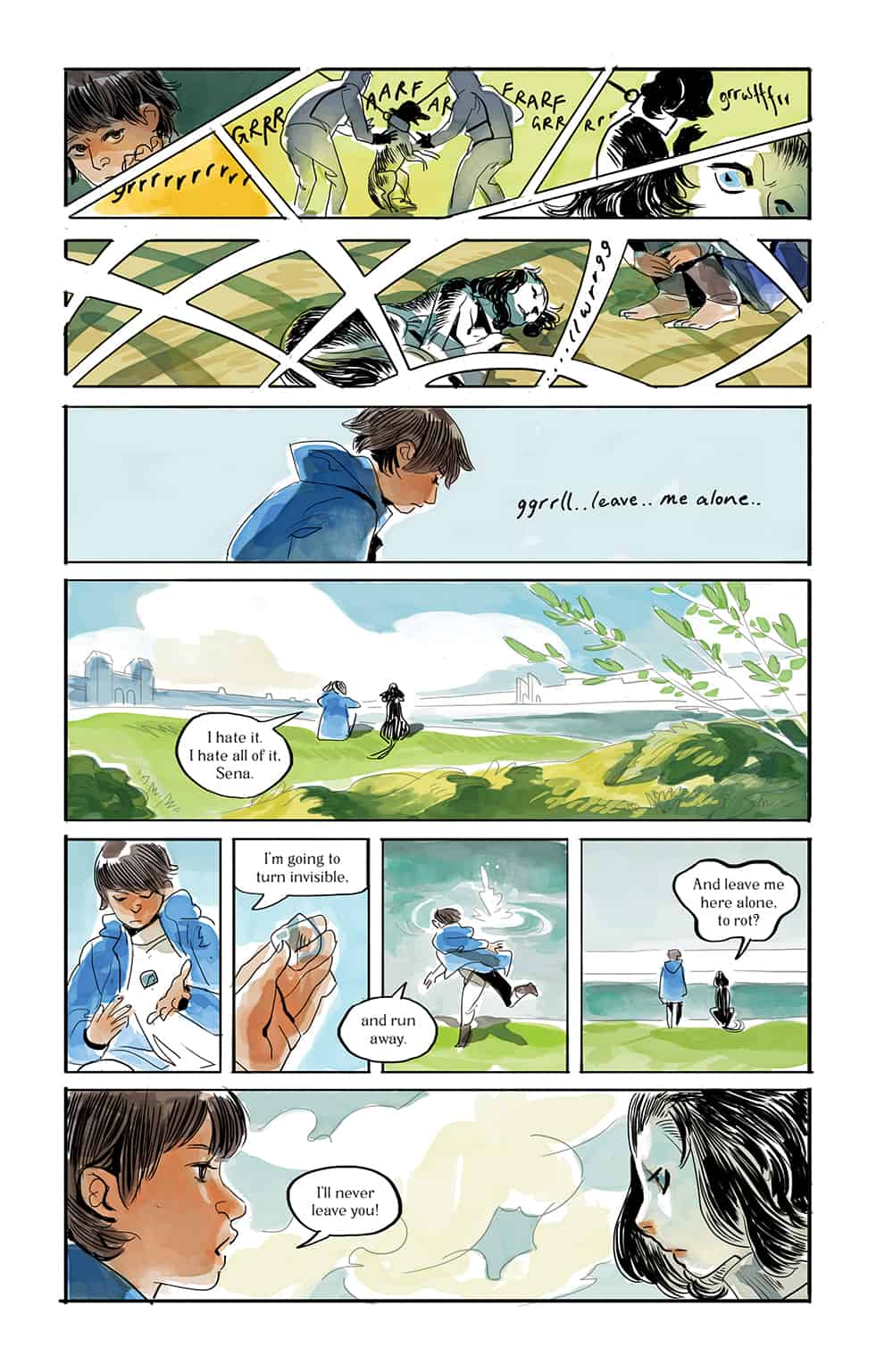 Thus the reader should also bring flexibility to the book. Ríos has suggested in interview that the story is meant to remain a bit mysterious. All of the exposition and world building that isn’t directly visual is related through the voices of characters. Because of this, the comic does not make for a passive reading experience. In fact, multiple times the framing creates the pattern of a broken mirror, and like Ríos’ collaboration with Kelly Sue DeConnick, Pretty Deadly, Mirror throws the reader into a strange new world without much scaffolding and forces them into putting together the shards.

The artwork is masterful–gorgeous, evocative, and playful in the form. For it alone is worth buying the issue. Add to that an emotional, compelling story of love, loyalty, and freedom, and Mirror’s premiere earns a deserved spot on any discerning comic book reader’s pull list.