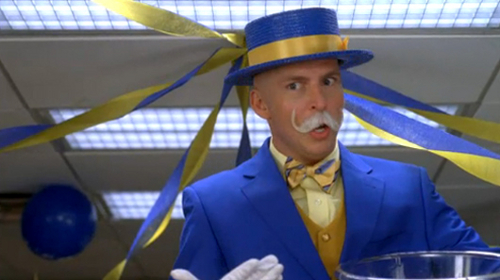 After a dismal Valentine’s Day episode that made it look like it might finally be time to write 30 Rock off, they follow up the deliriously sublime “The Tuxedo Begins” with “Leap Day” and it’s starting to look like the show may have regained its spark. The host of traditions they’ve established for February 29th is remarkably thorough, complete with it’s own holiday-movie. Leap Dave Williams, starring Jim Carrey and Andie MacDowell, seems to possess the cultural cache of Groundhog Day or Christmas Vacation, featuring a bevy of quotes everyone is constantly spouting such as “It’s Leap Day! Real life is for March!”

Much like America’s Kidz Got Singing! from the season premiere, Leap Dave Williams highlights the satirical talents of a writing staff featuring several Harvard Lampoon alumni (bringing it back to Christmas Vacation!). It’s a pretty spot-on skewering of the vapid comedies Hollywood seems to churn out every holiday season. Given that several of these star Jim Carrey, the extremes he’s willing to go to in service of self-parody are laudable. The clips from the film serve to inform the audience of the history of Williams and a lot of the episode’s charm comes from moments like the writers eagerly exchanging tears for candy as Kenneth prances on the table in full Leap Day Williams regalia.

If there is something that didn’t work this week it was, in a break from this season’s pattern, the Liz plot. Featuring Eastbound & Down’s Steve Little as a virginal-internet billionaire (he made an internet so the computers like him and Wall Street is Google!) with a decades-old thing for Liz, the humor feels a little broad and out of touch with a culture that is driven by geeks like Sad Thad the Skin-Tag Lad. This episode was directed by Steve Buscemi, who directed one of the funniest episodes of The Sopranos in “Pine Barrens”. He clearly has an eye for comedic timing and this is the second consecutive week in which 30 Rock successfully argues that it’s not dead yet. Continuing the Leap Day shenanigans, “Sweet Sixteen” informs us of the latest in a long list of bad breaks in the life of Jerry Gergich: he was born on February 29th. An overworked Leslie uncharacteristically forgets his birthday and then forgets to invite him to the surprise party she arranged to make up for it at Donna’s lake house.  It’s another typically heartwarming half-hour of Parks and Rec and it’s a testament to the show’s deep humanism that even when they are piling on Jerry you sense an underlying love and respect for the character on the behalf of the show’s creators.

In that vein, this season has served to deepen April’s character. Aubrey Plaza has long been one of the show’s less-appreciated cast members, perhaps a consequence of her dry, understated sense of humor. It’s too early in her career to refer to her as one-note, but this year the writers have gone out of their way to provide her with material that exposes previously unexplored talents. A few episodes ago we saw her reach out to Chris and tonight she unintentionally helps Tom and Ann refrain from breaking up, both instances add nuance to April’s professed misanthropy and require a canny subtlety in Plaza’s performance.

Which brings us to Tom and Ann, or Haverkins if you prefer. This plotline has garnered a lot of flak from critics but it feels strangely apropos. It’s long been apparent that Tom’s blustery swagger is something of a defense mechanism, an attempt to compensate the inexperience he views as a vulnerability. Is it not possible that Ann finally sees through this? And while she has no patience for Kangol hats or cutesy portmanteaus, she does seem to be at a point in her life where she’s willing to give someone like Tom a chance. It’s hard to tell exactly what the writers have in mind with these two or how long it will continue, but it’s been entertaining so far and it should be fun to see where it goes from here. Tonight Adam Reed & co. examine what Justified might look like if you replaced Raylan Given with Sterling Archer. If it’s not one of Archer’s best episodes, it’s a significant step up from “Lo Scandalo.” The biggest issue this week was the casting of Jack McBrayer as Ray Gillette’s brother Randy. Playing yet another redneck he is using more or less the same accent he uses on 30 Rock, which is rather distracting, especially because Kenneth’s youthful innocence is long in Randy Gillette’s past.  Your mileage may vary, but this can certainly create a disarming sense of mental dissonance.

Aside from that, it’s a reasonably strong episode, with Archer initially eager to go along with Ray (who was never paralyzed, we learn this week) because Randy’s situation mirrors the plotline of White Lightning (starring Burt Reynolds, of course). This devolves into an amusing wife-swapping plot based on Randy’s hilarious misinterpretation of Genesis 38:8 (look it up, Adam Reed did his homework here), and in yet another reversal we learn Michael Rooker’s crooked sheriff actually has Randy’s best interests at heart, capped off with Rooker coming on to Ray and revealing that his high school bullying was just misguided self-loathing.

It’s a lot of fun, especially for Justified fans (we can only assume the moonshine Archer is so excited about tastes like apple pie). Yet it’s lacking that special something that made episodes like “The Man From Jupiter” and “The Limited” feel like series highlights. Maybe it’s missing Babou; the chicken Archer addresses at the episode’s conclusion just isn’t an acceptable substitute.