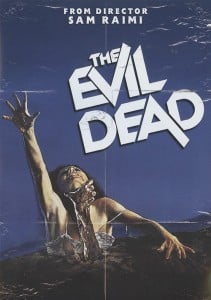 Easily one of the most requested titles for Blu-ray™ from Anchor Bay Entertainment’s unparalleled library of horror films, Sam Raimi’s 1981 cult classic The Evil Dead will officially make its high definition debut on August 31st with The Evil Dead Blu-ray™. For the release, two all-new 1080p anamorphic transfers in 1.85 and the original director-composed 1.33 aspect ratio, have been prepared and personally supervised by director/writer Raimi, presented in high-resolution Dolby TrueHD 5.1 audio, as well as a brand new commentary track with Raimi, producer Robert Tapert and star Bruce “Ash” Campbell! In addition, many of the bonus features, released on previous DVD editions, will once again be available on a special, limited edition DVD included with the Blu-ray™.

The Evil Dead is one of the most influential, landmark horror films of all time. Five college friends, including Ash (Campbell), drive to a remote cabin in the woods for a weekend of fun. Little do they realize that their fun will soon turn to fear, as an unstoppable supernatural force has been unleashed, surrounding and trapping them. One by one, they fall victim to the demonic forces at large, resurrected as murderous demons which can only be destroyed by dismemberment. Only Ash is left to combat the evil before it consumes the world. It’ll be a fight to the death … and to the undeath.

The Evil Dead Blu-ray™ (Disc 1) contains an all-NEW audio commentary with
Writer/Director Sam Raimi, Producer Robert Tapert and Star Bruce Campbell. A
standard DVD (Disc 2) contains the following bonus features, many returning for
the first time in years, and available only for a limited time: