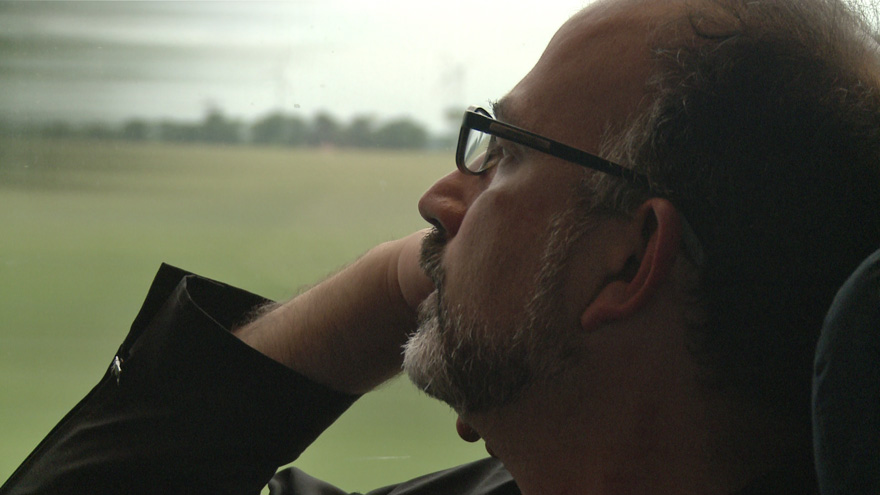 Following the death of his grandmother, Arnon Goldfinger and his family take it upon themselves to clear out her now abandoned Tel-Aviv flat. Wanting to annex the place of dilapidated memories, Goldfinger and his family, instead, discover documents that lead them on a journey that uncovers forbidden relationships, confounding national interests, and familial emotions that were hitherto suppressed.

In the beginning, The Flat doesn’t feel like a documentary. The film starts with a shot of the flat – dark, empty and forgotten. Goldfinger proceeds to open the windows, a literal metaphor for enlightenment. He also gets a book dealer to assess his grandmother’s literary collection, and when they are deemed to be old and irrelevant, they are put into a box and thrown away.

All of these actions, along with the actual event of the tidying, point to Goldfinger’s attempt to convey a message about the devaluation and disregard of history. Although this kind of didacticism is not uncommon in Cinéma vérité, it somehow feels out of place with the rest of this movie.

These events, most of them obviously staged, are often superfluous. Even though they add a thoughtful dimension to the story, they are not in line with the rest of the film, which functions as a conventional documentary. Unlike in the masterful Man on Wire, the choreographed metaphors are not fully integrated with the rest of the film. These scenes feel like they’re forced in; adding an element that’s nearly non-existent in the rest of The Flat.

What’s left is the actual documentation of his discovery. When he first discovers some illicit documents, Goldfinger enlists the help of his family, friends, and everyone he knows. As he interviews and questions his subjects, the film branches off in tangents, hoping to cover everyone in his family tree.

Most of these exchanges never amount to anything, but because he persists, they seem redundant and unnecessary. More voiceover narration, which the film already employs, would’ve sufficed. Furthermore, this adds to the glacial pacing, often frustrating the viewer more than it edifies. At 97 minutes, the film feels overlong. Rather than being a well-materialized documentation of his findings, The Flat feels like the meticulous chronicling of his research. This kind of approach can lead to suspense and anticipation, which are rare in documentaries, but because of the film’s aforementioned pacing and excessiveness, there isn’t any. Not only is the research a bit dull, the findings are also just as banal.

When we fully comprehend his grandmother’s mysteries, they don’t amount to anything revelatory, mainly because they aren’t any real ramifications to the discovery. What we learn is probably important to Goldfinger and his family, but for someone outside of his circles, and for people not ingratiated with Jewish or Israeli culture, it can seem extraneous. Although education for education’s sake is a noble cause, subjecting an audience to a personal epiphany, that neither affects or concerns them, is not very pragmatic.

As a private home video, or even as a family anecdote, the story behind The Flat can be interesting, but as a feature length documentary, the emotional impact is fairly exclusive.