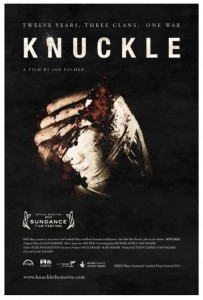 Knuckle did not start begin life as a documentary. Rather, director Ian Palmer met a bare-knuckle fighter at an Irish Traveller wedding in the mid-nineties and agreed to film an upcoming bout, in part to ensure that fair play was followed, but also to make some cash selling the videos. This sparked a film over a decade in the making.

Reflecting its video origins, much of this film consists of grainy, hand-held footage of bareknuckle fights that take place in backcountry roads and in parking lots. The fights themselves are brokered in order to resolve feuds between Traveller families, although ‘resolve’ is hardly the appropriate word to use here. Footage also comes from after-the-fact interviews and home movies made by the Traveller’s themselves – they sometimes shoot short flicks boasting about fights won or challenging other families.

Palmer spends most of his time following James Quinn McDonagh, the most prominent fighter of the McDonagh clan. When not fighting with rivals from other clans, James spends his time lamenting pointlessness of the fights and training for more fights. Palmer also spends a bit of time with rival families and younger fighters. Of course, the fact that he was shooting for over a decade means that Palmer captures a great deal of depth respecting his characters.

Thought James and the rest of the Travellers speak English, it is fairly accented and idiomatic. As a result, Palmer has subtitled the film. The dubbing is not entirely faithful, however, and it loses much of the richness and identity of the characters.

Go no more a roving?

The fights themselves are certainly the draw of the film. Held in remote locations and with few spectators (to avoid a riot), what we see can be unbelievably brutal. Many of these men don’t look like professional fighters – indeed, at one point two old, fat grandfathers risk stroke and heart attack to beat each other to a pulp. That said, there is not much beyond the fights to recommend the film. Palmer establishes the pointlessness of bareknuckle boxing as a way of resolving conflicts early on in the film – and aside from unravelling the source of the feud, we never really get away from that.

The good news, for those (like me) who want something more is that HBO is considering tuning Knuckle into a series. Knuckle isn’t a bad film, but it is a limited one. It is certainly an achievement that Palmer was allowed access into one part of notoriously secretive Traveller society, but it is a shame that he didn’t get to see more.