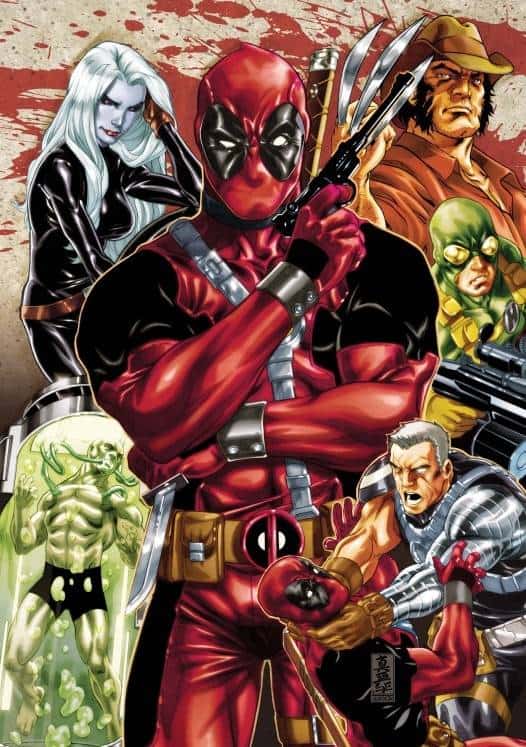 Notable Nicknames and Aliases
The Merc with a Mouth, Regenerating Degenerate

Powers and Abilities
Deadpool possesses an accelerated healing factor, artificially-endowed by the Weapon X project (the same organization which gave Wolverine his adamantium skeleton), which enables him to heal from injuries at a heightened pace and makes him immune to disease and toxins, rendering him functionally immortal.

Deadpool is a highly skilled martial artist, swordsman, marksman, and assassin. He also possesses an innate understanding of the rules of fiction and his role within them, and is able to break the fourth wall to speak directly to readers and his own artistic creators.

Movies and Appearances
Deadpool was played by Ryan Reynolds in the atrocious X-Men Origins: Wolverine film, in which the filmmakers decided to render the character mute in one of the biggest misunderstandings of what makes a character work in adaptation history.

Thankfully, Reynolds (who acquitted himself well as Deadpool in the scenes where he was allowed to talk) is back in a more comic book-accurate, self-titled Deadpool movie. 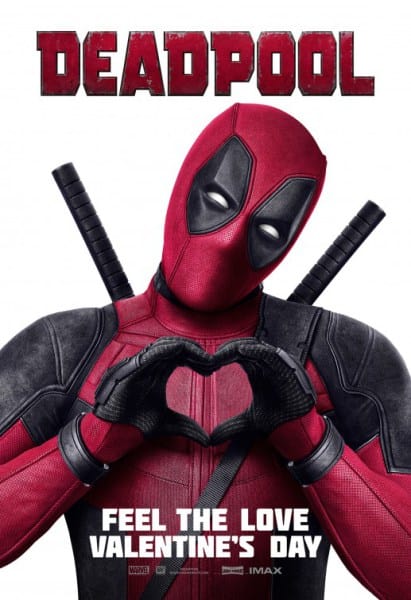 Memorable Moment
Deadpool #11, 1997: Deadpool and Blind Al get thrown back in time, specifically to the events of Amazing Spider-Man #47, disguise themselves as Peter Parker and Aunt May and battle Kraven the Hunter while trying to find their way home. 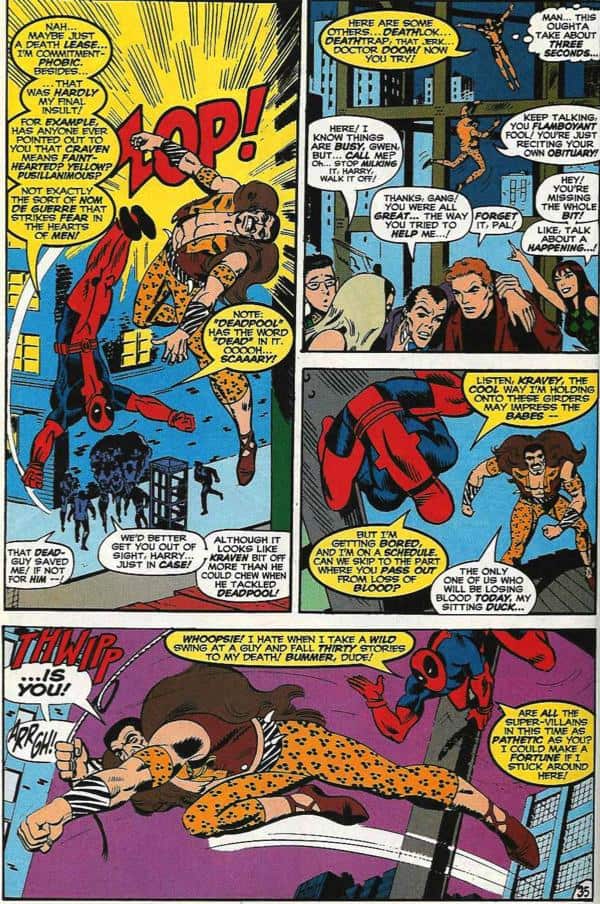 Fun Fact
Deadpool is pansexual, with his sexual inclination changing depending on what his brain is telling him he wants at any given moment.

Austin’s Analysis
Deadpool’s road to super-stardom, from a 90s-riffic Liefeld character to movie star and perennial bestseller is an odd, almost-unprecedented one. Without a doubt the most successful (in terms of revenue-generation, multi-media exposure and overall popularity) solo Marvel character introduced after Wolverine, Deadpool was born amidst the dying gasps of New Mutants, a series that was being put to pasture in order to transform it into X-Force, a move intended to placate superstar artist Rob Liefeld by giving him a brand new series in which he could cut loose in EXTREME 90s fashion. Upon his introduction, Deadpool is a classic Liefeld character: all belts and pouches and swords and handle-less guns with a mysterious past and motivations, a pretty obvious mash-up of DC’s popular villain Deathstroke crossed with Spider-Man’s quippiness. Despite little characterization, he caught on with readers, and Liefeld quickly brought the character back to feature prominently in X-Force #2. 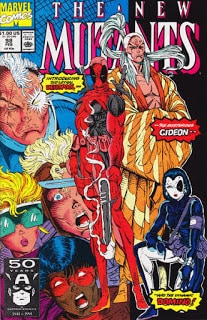 Deadpool would soon need to stand without his creator, as Liefeld joined his fellow superstar artists (most of whom were working, in some capacity, on various X-Men titles) to leave Marvel and form Image Comics. Deadpool, who was mostly a blank slate (his motormouth aside) in Liefeld’s hands anyway, had no problems surviving his creator’s departure, eventually getting a pair of limited series and popping up frequently in guest appearances throughout the X-line. As is the natural order of things, this eventually led to Deadpool getting his own ongoing series, a series which, in the hands of creators Joe Kelly and Ed McGuinness, became something of a critical darling at a time when the quality of comics at Marvel, and in general, was routinely lacking. It was in their hands that Deadpool finally gained some level of characterization and, notably, his penchant for breaking the fourth wall, of acknowledging his existence as a fictional comic book character and speaking to the readers directly (in the tradition of previous fourth wall-breaking Marvel characters like Howard the Duck and She-Hulk). 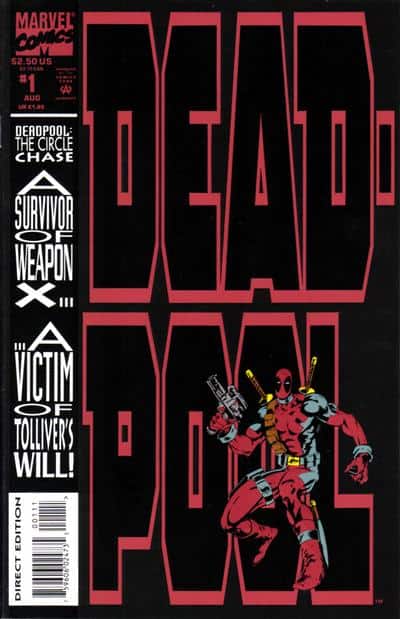 But while this irreverent disregard for the structural rules of storytelling is now an accepted, defining, and beloved part of his character, audiences were perhaps not yet ready to embrace the character as a solo star, and while a critical darling, his ongoing series flirted often with cancellation, eventually coming to a quiet end as a result of a reshuffling of the X-Men line that saw the title re-titled Agent X, in the process losing much of what had made the character distinct as a new publishing regime took the Marvel in a more “serious” direction. Deadpool spent the early 00s back in guest star mode, occasionally getting a new limited series, and briefly co-headling an ongoing “odd couple” series alongside fellow Liefeld-creation Cable. 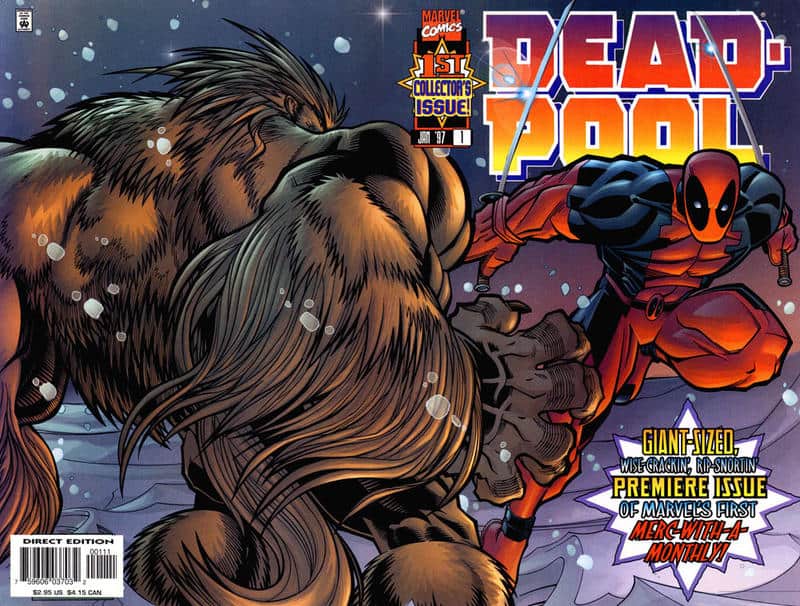 Yet as the decade came to a close, something strange happened: Deadpool suddenly became extremely popular. One-shots and miniseries sold well, so more were produced, and eventually, Deadpool regained his own solo series. And then another. And another. Before long, he was no longer just an afterthought of the X-Men franchise, he was his own franchise. By the mid teens, he was a bonafide sales success: in 2014, comics starring or co-starring Deadpool accounted for just under 8% of Marvel’s total sales – for comparison, Wolverine, Marvel’s evergreen guest star and the poster child for overexposure, accounted for just under 10% of Marvel’s overall sales. And in that year, Deadpool outsold Iron Man, one of Marvel’s bedrock characters dating back to the Silver Age of comics, who is routinely considered one of the most popular characters in the Marvel Cinematic Universe, by over six percent. 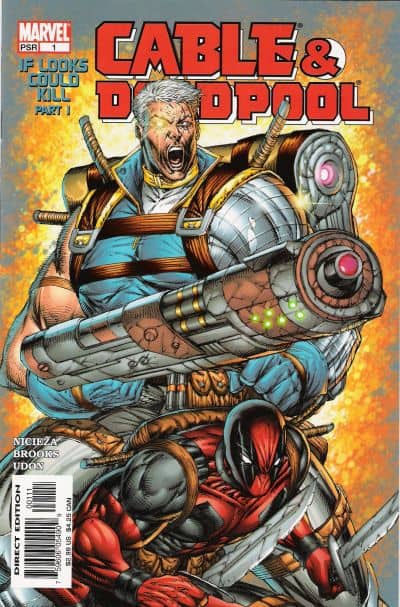 It’s an inexplicable level of success for a character who started out so innocuously, a bumpy rise to sales success that simply does not happen very often in today’s market, and it is difficult to pinpoint exactly why. Some of it is down to changing tastes, as fans of that original late 90s series are older now, with more disposable income and/or are comic book creators in their own right, able to craft and shepherd through the rigors of publishing the kinds of Deadpool stories they enjoyed in their younger days. Some of it has to do with a shift in tone at Marvel: the deadly serious “we’re not for kids!” mentality of the early 00s has been replaced by a more irrevent, fun outlook (informed in part by the tone of the Marvel Cinematic Universe), one that isn’t afraid to try different, quirkier, less grimdark things like a Squirrel Girl or Devil Dinosaur series. And some of it is down to that crazy alchemy of popularity, of a character hanging around on the fringes just long enough to be found, and embraced, by the right audience. 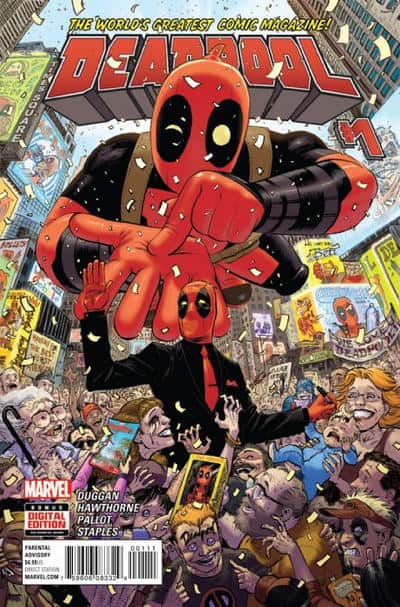 Whatever the cause, there’s no doubt that Deadpool, now on the cusp of his solo feature film debut, is a bonafide star, and poised to become even more popular. From a knockoff Liefeldian villain to fringe X-Men hanger-on to franchise carrier and movie headliner, whacky, irreverent, fourth-wall breaking Deadpool is now one of Marvel’s staple characters, the culmination of a long and surprising journey.