Currently in its tenth year, the Toronto After Dark Film Festival (TAD) is set to run from October 15 – 23 in its home, Scotiabank Theatre. TAD provides essential viewing for genre film lovers, offering a mix of horror, sci-fi, and potential cult-movie classics. Staying on top of all twenty films (as well as the festival’s numerous shorts) is an arduous task, so here is a list of five must-see films that will be screening at TAD 2015. 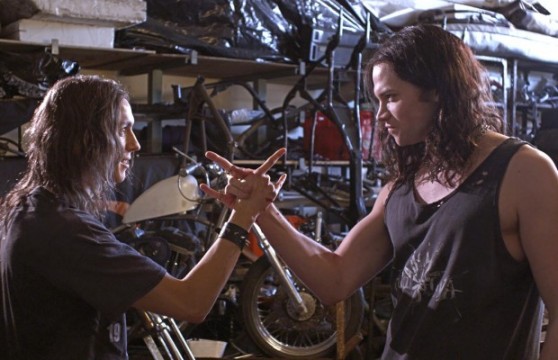 Heavy metal and the occult is a match made in heaven hell, and Jason Lei Howden’s feature film debut, Deathgasm, plays with all the tropes associated with the death-metal genre. Since its SXSW premiere, Deathgasm has been winning over both critics and fans with its lowbrow slapstick humor, endearing characters, and gory visuals. With Deathgasm, TAD has the perfect midnight madness genre picture on its hands, and the festival programmers are savoring this one, unveiling the movie to audiences as the closing Gala film.

The entertainment industry’s trend towards blockbuster filmmaking has resulted in an increasingly homogenous movie landscape where auteur directors are a dying breed. Japanese director Sion Sono is single-handedly bucking that trend. To call Sono a unique cinematic talent is like simply describing the ocean as wet. Sono churns out as many films in a year as most directors produce in a decade (Sono has TWO films at TAD) and he pushes boundaries with the reckless abandon of a kamikaze pilot. Tag’s trailer begins with a group of schoolgirls getting mowed down by gunfire, and things only get darker and more violent from there. Fantasia Film Fest awarded Tag best film back in July, and North American Sono fans have continued clamoring for another opportunity to watch this highly anticipated film ever since. The wait is almost over.

Tales of Halloween consists of ten macabre tales, taking place in an American suburb on Halloween night. The Neil Marshall (Dog Soldiers, The Descent, Game of Thrones) directed segment, Bad Seed, may be enough on its own to guarantee the film is worth the price of admission. There is already a bit of buzz suggesting that Tales of Halloween may take the modern day horror anthology crown from Trick ‘r Treat, and with ten stories encompassing everything from aliens to imps, this film is sure to include at least a couple segments that appeal to everyone.

Headlined by Adrian Brody and Sam Neil, Backtrack spooked audiences at this year’s Tribeca film Festival. Backtrack is a supernatural thriller about a psychologist named Peter Bower (Adrian Brody) who discovers that his patients are seeing ghosts — an issue which didn’t work out well for Dr. Malcolm Crowe in The Sixth Sense. Much as characters in horror stories are wont to do, Peter retreats to his countryside hometown to unravel the secrets of his dark past (something says that his rural excursion only makes matters worse).

The Hallow’s IMDb synopsis reads, “A family who move into a remote milllhouse in Ireland find themselves in a fight for survival with demonic creatures living in the woods.” Fair enough, the synopsis sounds like standard horror movie fare. Now go watch the film’s trailer and then try not to sleep with all the lights on tonight. The film looks utterly terrifying, and it has the cred to back it up — The Hallow left its Sundance audience quivering in their seats. With its solid cast (featuring the consistently amazing Michael Smiley), strong buzz, and talented up and coming director, The Hallow should make its way onto everyone’s must see list.