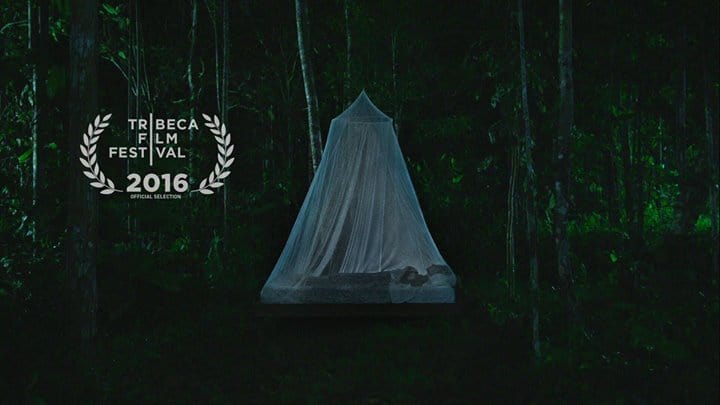 This hypnotic, visually stunning film was carefully designed to be highly experiential.  Co-director, Leonor Caraballo,  was diagnosed with cancer. In her search for treatment, she discovered a small medicine village in the Peruvian rainforest. “Her interest in the Amazon started when she was introduced to shamanism and plant medicine as practiced by the Shipibo-Conibo communities in Peru. She traveled to the Amazon and up and down the Ucayali river, experimenting with her life, death and artistic practice. Leonor died on Saturday January 24th, 2015 before completing the film. – http://www.icarosavision.com

ICaros: A Vision  is about Angelina, an American on a healing quest.  She has cancer but her intentions are not revealed. With trepidation she surrenders to the healing practices of the shamans, Ayahuasca and Icaros. She befriends one of the young shamans Artudo, played by Artudo Izquierdo,  who is part of the lineage of Shipibo-Conibo shamans from the Ucayali community of Nueve de Octubre.  His character discovers he is going blind. The film quietly follows their intertwined journeys.

The rainforest is often used as the backdrop to drive a story’s narrative. “It takes place in the jungle..” usually asserts the film’s theme. It’s the dangerous otherworld, wars covertly fought, people swallowed alive, a place where life becomes more unknowable and people lose their sanity. What’s immediately different about ICaros: A Vision is the rainforest and its inhabitants are brought down to earth. The film opens with a woman traveling in a boat, delivering a plant to another town, with a narrator listing the different sustaining, healing attributes of the forest’s plants. If the forest were to be cast as a character here it would be a loving home or wise parent, brimming over with sustenance for it’s dwellers.

ICaros feels like the stories my friends have dispatched from the Amazon.. ICaros points to important ideas about the nature of healing. It opens a legitimate, in-depth door into this type of healing as another possible path to explore that has it’s own risks and benefits. Scenes of rinsing vomit buckets, going to the toilet, cleaning bedding, caring for severe bug bites normalizes daily life for the caretakers. The stunning psychedelic, hypnotic visuals during the ceremony bring the viewer deeply into the healing journey. Healing is difficult, often tedious, and mind-binding work no matter what path one chooses. The mystique of the Amazon is neither romanticized or fetishized here. Instead, it demonstrates a way of living that makes room for the mysterious and a way to find a peaceful co-existence with ideas that may be larger than we will ever cognitively understand.

ICaros intelligently doesn’t offer endings for almost all of it’s characters. It’s clear that the films purpose is to shine as authentic lens as possible into a type of healing that is often misrepresented and misunderstood. Actually what I loved the most about ICaros is that I left the film pretty sure this isn’t something I likely would do unless I would be facing a life-threatening illness or serious health crisis. Unlike exploitative films that use the Amazon as the set of a nightmarish descent into devilish madness, ICaros simply offers another possibility for profound, authentic healing. It is medicine and it’s not something to mess around with. ICaros present shamanic ayahuasca healing not as spooky but as something to approach with legitimate respect.

I found the artistic statement for the film really unique and powerful so I decided to share it here from the films website : Icaros: a vision’ is a story about fear and the release from fear – the fear of illness and of death, but also the fear of life and living. It’s about the possibility of living through one’s fear – which is what the Amazonian plant Ayahuasca is good at getting you to do. Centered on the nightly ceremonies that are the main feature of shamanic retreats, Icaros revels in darkness, replicating a shamanic journey.

The film mixes in elements of reality. Set in an actual Ayahuasca retreat in Peru, it features real shamans and indigenous non-actors from the Shipibo community, mixed in with western actors. Aspects of the film are based on co-director Leonor Caraballo’s true experiences. She had metastatic breast cancer when the shoot began. Although she dedicated herself to the project until the very end, sadly she died before she could see the film finished.

The film is also driven by the conviction that acknowledging the power of plants is the best way to change the jeopardized future of the Amazon – itself like a dying patient. The exploitation of Shipibo lands and communities by oil and timber companies continues. Over the next 20 years, massive tracts will be destroyed to produce only enough oil to sate U.S. demand for, at the most, two weeks. The men and women who have the knowledge of healing plants are finding few in the younger generation who will cultivate their practices. Thus part of the film’s goal is to bring attention to the work, life and knowledge of the Shipibo Conibo people.

Icaros: a vision is a filmic tapestry about the meeting of cultures, a West in search of its lost soul and the indigenous Shipibo adapting their expansive practices and unique view of the universe.