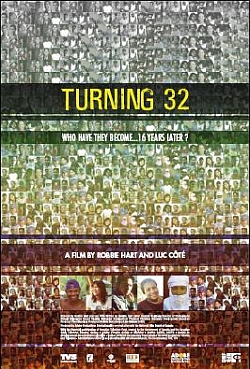 Turning 32 asks an impossible but fascinating question: what parts of growing up are universal? A sequel to the 1992 television series Turing 16, this film reconnects with the principal characters of that series and traces the direction of their lives. It jumps back and forth in time and exploring the difference between expectation and reality, naiveté and experience, and modernity and tradition. Knowledge of the original television series is not necessary; directors Hart and Côté integrate the most interesting and relevant portions of Turning 16 into their film, minus the embarrassingly PSA feel of that series.

The main appeal of Turning 32 is they way it balances broad scope with very personal stories. Filming takes place in Jamaica, Brazil, Thailand, Niger, and India, and though the filmmakers work to portray the cultures of their settings, they always put their protagonists first. In Jamaica they follow Rosie, a teenage mother turned community role model; in Brazil, it’s Pintinho, a former professional soccer player who never quite reached the fame he deserved; in Thailand, we follow Puttinan, a one-time child worker who becomes the first of her village to graduate university; in Niger, we meet Idrissa, a Tuareg who fought in a civil war and wandered the Sahara before embarrassing his cultural roots; and in India, we search for Sonam, a Buddhist monk who ends up abandoning his monastery and his vows. The film jumps back and forth between characters and across time, because universal themes are more important to the filmmakers than linearity.

As I’ve previously alluded, the main problem with the film’s progenitor, the television series Turning 16 (which I watched only after Turning 32), is that it felt like a public service announcement, with teenagers as not only a subject but a target audience. Unlike that early 90’s series, this film does not assume we are idiots, nor does it dumb things down by explaining rudimentary things like the location of Thailand. It does, however, give subtitles to its subjects that speak with a thick accent, but this is more of a courtesy then anything. Another major improvement seems to be the film’s budget; it looks and sounds gorgeous.

I wrote that the question the film asks, what parts of growing up are universal, is impossible. I do think that a finite answer is impossible, but I must say that I enjoyed this film’s exploration of their question. It is a contemplative journey that crosses the globe and dips into the past, and it made me think about my own life’s trajectory. Few documentaries do that.

(Turning 32 has its Toronto premier at the NFB Mediatheque. It will be showing nightly at 7pm from February the 4th to the 10th. Tickets are six dollars; four dollars for students, seniors, partners, and Front Row passholders.)