In Cell by Cell, I look deeply into the panels of an issue, appreciating and analyzing the story and artistic composition.

As the violence ramps up to the issue’s conclusion, the action on the field and the layout of that action becomes more fragmented and chaotic. Faces are hyper-expressive, causing frustration, panic, and, in the case of Operative Whitney, smug enjoyment to leap off the page.

A new layout presents a structural diagonal, as before intensifying the sense of tension and chaos. It also creates a disorienting zoom in, pull back effect, like a dolly zoom (or Vertigo effect) for the page.

It’s a technique that expresses two concurrent qualities: disorientation and realization. Certainly, punches in the face are disorienting, but worse is the realization that Meiko is left entirely unguarded.

The diagonal lines of narrative created by the littlest panels featuring close-ups of Penny’s face and fist can be read in multiple directions, as long as the bottom right panel is read last, indicating her sudden realization and panic about being distracted from her defensive duties. They can also be read as happening concurrent to the panels featuring Kam, Alika, and Meiko, creating a heightened sense of chaos. 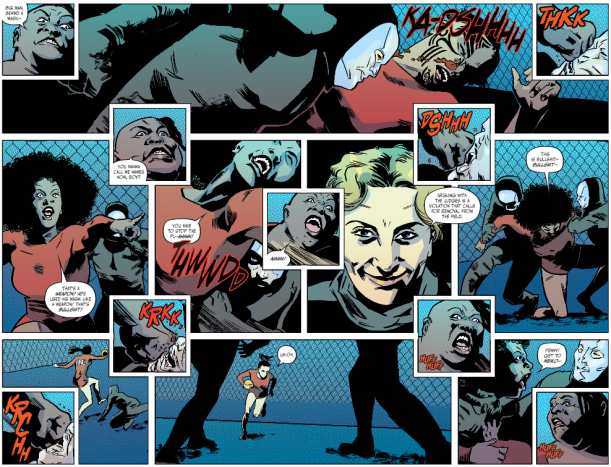 Each close-up focuses on Penny’s eyes, showing her anger first, then rage, then finally turning her head and her emotions to fear and anxiety. The expressiveness of her eyes, brows, and mouth fill every point of the panel with her emotion. She starts with verbal taunting of the guard, but then becomes too winded to talk as she continues her pummeling. The outcome of the physical assertion is shown in the cross-diagonal panels depicting her fist repeatedly hitting the guard’s mask, causing increasing damage.

Cell 1 runs the full two-page width, giving a sweeping kinetic quality to the head-butt Alika receives from a masked guard. He uses his mask, both a disguise and a shield, as a weapon, hitting her in the face and likely breaking her nose. The act strikes me as metaphorical in a vague way, creating an analogy for privilege as a weapon rather than merely a protection. For instance, a person of privilege who denies the veracity of claims of oppression enables further oppression and violence, and through denying the truth of it effectively silences the claimant.

Kam calls foul in cell 2 for the mask being used as a weapon. Her face is wide open, eyes bugging out, brows at their peaks to express her outrage. She points her finger at the wrongdoing, but the effect is to draw the eye to her own face in cell 3 when a guard punches her in the side from behind before she can finish her call to Whitney to stop the play. 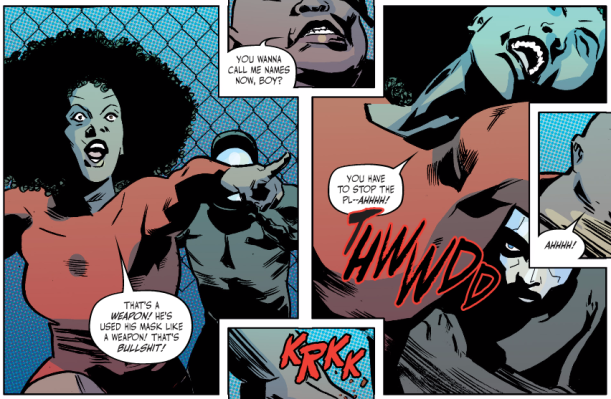 Whitney won’t stop it. In cell 4 her face clearly expresses her absolute pleasure at the violence and chaos that has broken out. Did she plan this, like Marian’s death was planned in issue #1? Or is this just enjoyable to her as merely a witness? If she didn’t plan it from the beginning, her response to Kam clearly shows she’s willing to further tip the balance in the guards’ favor. She calls Kam on the infraction of arguing with the judges and removes her from the playing field. Cell 5 shows the guards grabbing Kam’s arms for removal and Kam repeating, “This is bullshit.”

But removing Kam is just as important as distracting Penny if this is part of a secret plan devised by Whitney. Since Kam was the inmate willing to defend Marian against her attackers, she needs to be neutralized.

Cell 6 draws attention back to Meiko, running across the field with the ball, now completely unguarded. In this long shot composition, we see her dodge the grab of a guard. But in cell 7, a closer crop, we see two large, menacing, silhouettes coming towards her in a flank. She utters an, “Uh oh.”

Cell 8 returns to Kam, close up side angle of her face, as she calls out to Penny. The placement of Penny’s realization panel on top of this one aligns the timeline to show this moment happening concurrently, and the sharp right angles of the panel embedded heighten the sense of impending ruin. 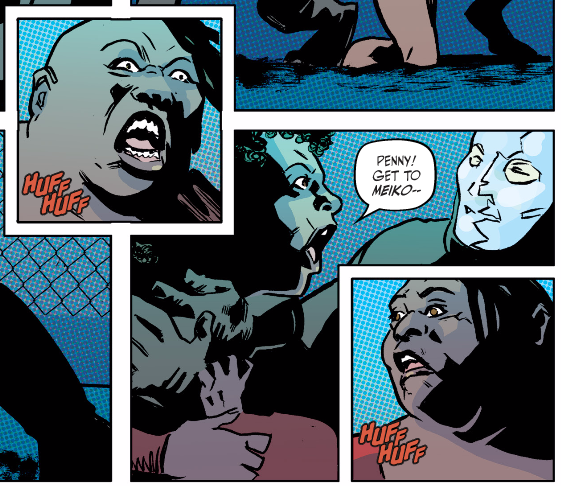