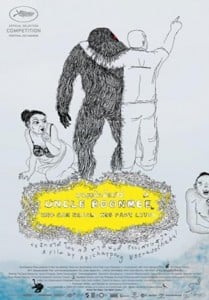 “A cinematic rarity, this will be a film to be discussed for years to come with a special warmth reserved for films that touch and change all those willing to open up their heart and soul to its influence.”

Uncle Boonmee Who Can Recall His Past Lives

Though often difficult to decipher, the quiet pace and gentle touch of Apichatpong Weerasethakul’s newest film, Uncle Boonmee Who Can Recall His Past Lives, makes for a spiritual and meditative film experience like no other. Uncle Boonmee is ill and his sister-in-law and her son visit as he becomes habituated to the new regiment meant to extend his foreshortened life. Moving closer to death, the barrier between the world of the spirits and that of the living dissolves, and Boonmee is met with his dead wife, his lost son, and of course, his past lives.

Long takes of seemingly mundane daily activities extend what will eventually be forgotten moments, immortalizing their detail and intricacy, while allowing their deliberate pacing to form a powerfully iconoclastic atmosphere. Built on such moments, the audience is forced to reflect on the minute changes in the mise-en-scene, which allows for moments of the supernatural to unfold with patient surrealism. Changes are often so subtle that they are only apparent when fully revealed; the audience can’t help marveling at how such drastic changes and apparitions happened without much notice.

Questions of the unknown seems to be at the heart of this film, especially the search for greater truth. Appropriately cryptic, fears and desires transform into a hyper-emotion. The excitement of discovery as well as the fear of an end blend into one. As Boonmee recalls past lives (and maybe even future ones), his identity becomes somehow more certain. We are not necessarily more privy to his mortal experience, but as his fragmented existence comes together he becomes more serene, and the audience does as well. Finding the meaning of life is futile, but finding peace in the journey is pivotal.

Then there is Boonsong, Boonmee’s lost son who apparently mated with a 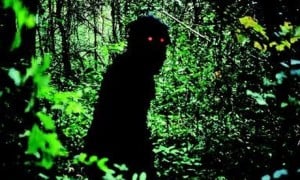 monkey spirit to become a strange Bigfoot-like creature. The reaction to this creature is no doubt different from person to person, perhaps reflective of an individual’s relationship with death and the unknown. Both fear and laughter are natural responses, but they conceal an obvious insecurity with the unknowable: the possibility of a higher ascension through the natural world that defies and even contradicts our concept of humanity. Cloaked in darkness with glowing red eyes, these apparitions barely seem to move; their presence is more like that growing buzz of insects and nature that indicates a blending of diverging existences. They seem to vibrate, rather than exist as tangible beings. Their presence, though apparently “natural,” is quite disturbing, suspending the audience’s ability to make sense of unfolding events. If they were not so apparently harmless, they would be terrifying, in one of the film’s many contradictions.
One of the best sequences in contemporary cinema is a memory from one of Boonmee’s past lives. He is an old princess who has watched her beauty slip away; once beauty is lost, death is soon to follow. She makes a deal with a catfish to restore her youth, and an evocative and sensual scene follows. Not only is the content of the scene loaded with hidden meanings, dreams and desires, but the aesthetic presentation is a whirlwind of auditory and visual textures. Though sparse, these moments effectively evoke pivotal moments of otherwise forgotten lives. Not all are as obvious and vibrant as this, but each is peculiar, fascinating and above all enchanting. 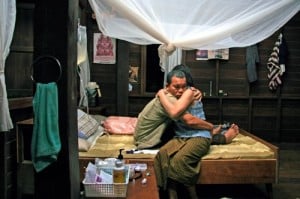 Unfortunately, much will be lost from this film when seen on a small screen. Weerasethakul composes very few shots in close-up, preferring to include full bodies and extended movements. On the big screen this evokes a kind of “life-ballet,” but without the scope of the big screen, it may come across as a clumsy or unnecessarily dense. The film is largely deceptive, and it is nearly impossible to grasp everything it has to offer in a single viewing. A cinematic rarity, this will be a film to be discussed for years to come with a special warmth reserved for films that touch and change all those willing to open up their heart and soul to its influence. 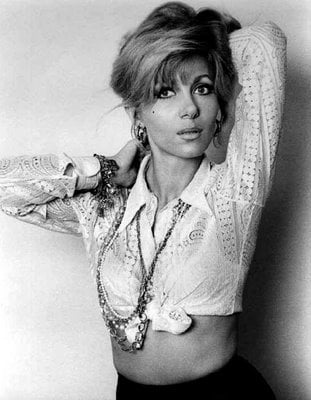