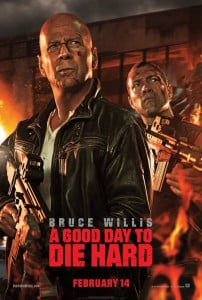 A Good Day to Die Hard

Die Hard, 25 years after its initial release, is one of the best action films of all time not because of its jaw-dropping setpieces or titanic explosions, but because its hero is perfectly, proudly unspectacular. John McClane pulled off some amazing stunts at the Nakatomi Plaza, of course. What makes him so endearing, however, is his sheer disbelief at surviving each volley of gunfire, each explosion. By now, McClane’s less a hard-bitten survivor and more of a superhero wreaking havoc wherever he steps foot. Because the stage has grown so large, from a building to an entire country, it’s ironic that A Good Day to Die Hard, the fifth film in this seemingly unending franchise, is distressingly unspectacular

Bruce Willis dives once more into the fray—OK, he ambles into the fray—as McClane, traveling to Moscow to keep tabs on his delinquent son Jack (Jai Courtney), heading to trial the same day as a political prisoner who threatens to blow the whistle on massive corruption that’s spread throughout Russian politics. Jack has plans for his fellow inmate, and of course, his dad gets roped in as the prisoner’s ex-business partner aims to bring him down, any way possible. Soon enough, McClane and son are hoisting shotguns, machine guns, grenades, and any other incendiary device in sight to fend off their Russian attackers. 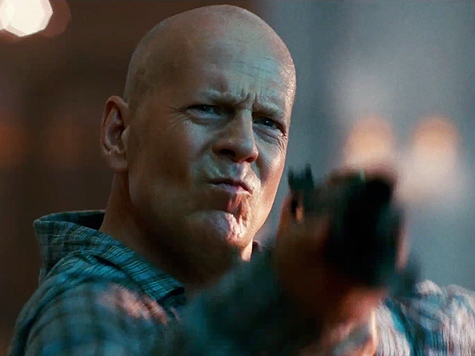 It’s easy to wince at the glee John and Jack display when wielding various firearms, using the recent tragedies in America as an excuse for the awkwardness inspired by such imagery. Pertinent to the series, however, it seems wrong for John McClane to giddily whip out a machine gun, even if we know the people he’s aiming for wish to do him and his son harm. McClane wasn’t the most reticent gunfighter; still, he never felt particularly enthusiastic. His put-upon nature in the first film was cheeky and relatable; the constant repetition here of “I’m supposed to be on vacation!” gets old fast, because you can tell Willis doesn’t even buy the line. So we’re left with sound-and-fury-signifying-nothing violence, explosion after explosion existing solely to impress us. Director John Moore and writer Skip Woods are more invested in proving they can top whatever action sequences we’ve seen in the genre recently, but by piling on with as much as possible, they only create a truly exhausting experience.

As laser-focused on the action as he is, Moore is unable to let his camera sit still. The few times when there’s a shot that lasts more than a few seconds and doesn’t feature characters running, fast-walking, or jumping, you may get a disconcerting feeling, as if the digital print has been paused in the projection booth. The first major setpiece, a loud and destructive car chase through the city streets of Moscow, is overstuffed with quick shots, jump cuts, and zooms, rendering moot any impact the scene may have. Moore is unwilling to let the action naturally crescendo to a climax, presuming that every car that’s smashed into deserves a deafening swell of music and accompanying shot to preserve the carnage, if only for a split second. In these scenes especially, A Good Day to Die Hard feels nothing like a Die Hard movie, and everything like a generic, unremarkable shoot-‘em-up with ciphers as the leads. 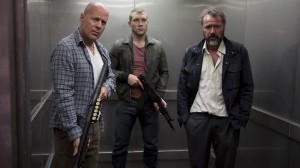 Willis is, at best, game as McClane, defined by his now-tired attempt at winning surliness. And though he’s decent enough in the lead role, he’s playing as much of a Looney Tunes character as the main henchman who hounds John and Jack at every turn, and chomps on a carrot at one point like Bugs Bunny. Courtney is adequately gruff as Jack, though his character represents a hoary cliché in the series: the person who despises John for having been a bad husband/cop/parent/fill in the blank. By now, John’s just a snarky, would-be average Joe, so the antagonism among sidekicks is simply forced. The final frustration with A Good Day to Die Hard is that the real villain is unclear—is it the gangster-like politico, his henchman, or someone else? The closer we can get to a new Hans Gruber, the closer we’ll get to a memorably good Die Hard film.

Unfortunately, A Good Day to Die Hard is as uninspired as the banter between John and Jack McClane. Bruce Willis had a solid 2012, with sterling supporting work in Looper and Moonrise Kingdom, two of that year’s best films. Since he broke out as a star as the cop from New Jersey who just wanted to have a nice, calming vacation, it may be easy to forgive him wanting to return to the role. And a fifth film in an action franchise doesn’t automatically have to feel stale and obnoxious; it can be lively, likable, and fresh. A Good Day to Die Hard is, sadly, the former. As a Die Hard film, it’s somewhat depressing to watch. As a standard-issue action movie, it’s just there, a crime unto itself. 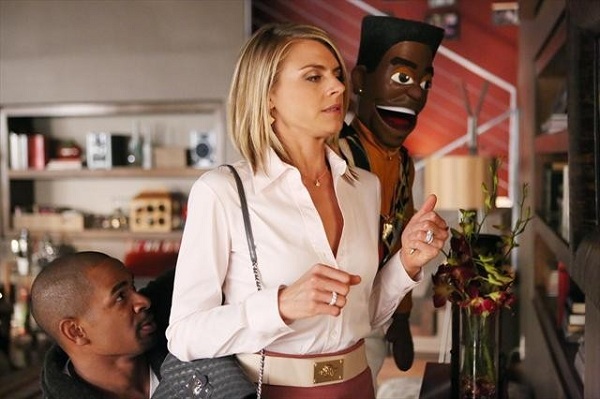 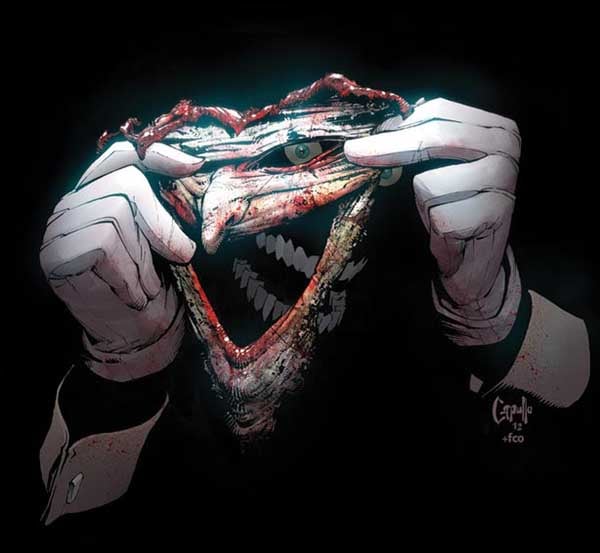