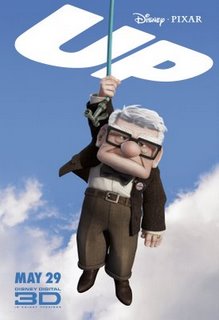 Those waiting for animation powerhouse Pixar to slip up are going to have to wait a little longer, as their third straight unmitigated success comes courtesy of Up, the latest effort to be directed by Pete Docter, who previously helmed Monsters, Inc. Up may not be quite the cultural phenom WALL-E turned out to be, and its flights of fancy not quite as daring as that film’s dialogue-free opening gambit, but it is nevertheless a lovely final entry in this phase of Pixar’s exitence – the next two years, disappointingly, will be taken up with sequels (Toy Story 3 and Cars 2).

Until then, though, let’s be happy that our screens have been graced with a stunning hat trick of original features that began with Brad Bird’s Ratatouille. Where that film starred a strikingly realistic rat, and WALL-E was a diminuitive trash compactor, Up features a similarly unorthodox protagonist for a film oriented towards children: a very old man named Carl Frederixkson (Ed Asner). Considering the way most kids feel about seniors (IE, “yuck”), that’s a fairly gutsy move as it is, but Docter and Peterson, who co-wrote the screenplay with actor-director Joseph McCarthy (The Visitor), up the stakes with a “hard PG” approach, making this the first Pixar film to deal with human mortality. An artful montage delineates Frederickson’s life-long love affair with Ellie, beginning with their marriage and culminating in her death, and detailing all their dashed hopes in between – a stunning sequence. After her passing (and a surprisingly rendered altercation with a local contruction worker), Carl decides to enact the lifelong dream he and Ellie shared by transforming thier home into a flying machine powered by hundreds of helium balloons – much to Frederickson’s chagrin, however, he’s inadvertently joined by an uppity boy scout named Russell (Jordan Nagai), whom he’s forced to look after for the course of the trip, against his now-curmudgeonly nature.

Among Up‘s strengths – besides the ones that typify Pixar releases, like its visual splendor and ridiculous attention to detail – is its willingness to keep its resonant themes afloat admidst a growing population of kid-friendly additions. Yes, the latter half of the film features “talking” dogs (a great gag I won’t spoil), a giant, colorful bird, and an elderly foil for Carl in the form of long-lost explorer Charles Muntz (Christopher Plummer), but enough careful asides are included so that viewers never lose sight of Carl’s struggle to maintain a purpose in life. Some of the kiddie-factor inclusions could have been shelved, though – the “chipmunk voice” gag, for one, seemed a step too far in the direction of broad kid’s humor.

It’s possible that Pixar’s next slate of films will finally see them stumbling and losing momentum, especially given that one is a dreaded “threequel” and the other is a follow-up to one of their less-compelling releases, but Up, though perhaps not quite as dazzling or inventive as the two features that preceded it, should not disappoint the studio’s fanatics, and hopefully Lasseter and company are savvy enough to continue playing to their strengths – bold, original standalone features – in future.