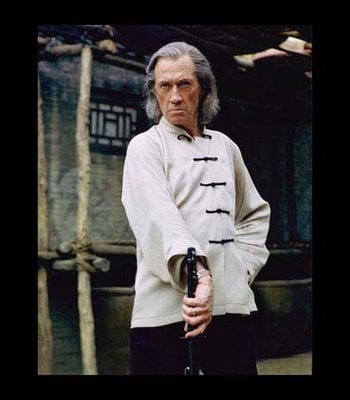 The Cult and Genre movie community is in shock today to learn of the death of movie icon, David Carradine. Carradine, who was 72, was found dead in his hotel suite on Wednesday, in Bangkok, Thailand. According to what Thai police told the BBC, Carradine was found was found by a hotel maid with a rope around his neck. This rumor has yet to be confirmed pending an in depth investigation.

Most of the World remembers Carradine for his performance as the star of Kung Fu, which aired from 1972 to 75. Carradine played the character of Kwai Chang Caine, a shaolin monk who wonders through the American Old West searching for his long-lost brother. The series had a very-brief, second incarnation during the 70’s, co-starring Carradine’s son, Keith. Recently, Carradine has recently been exposed to the general masses playing the title roll of Bill in Tarantino’s Kill Bill vol. 1 & 2.

Even though Carradine’s career highlights are few and far between to pop culture at large, those of us in the Cult movie community will remember him for his illustrious career and unforgettable roles. As the high-speed hero Frankenstein in 1975’s Death Race 2000 he went head-to-head against a young Sylvester Stallone. He was nominated for a Golden Globe for his portrayal of Woody Guthrie in Bound For Glory, and immortalized many other under-the-radar roles over the last 45 years. Carradine left a mark in the cult market that most actors can’t, or will, ever touch. He will be missed by many.