So every year in SWTOR around the festive season, Life Day comes around in the Star Wars Expanded Universe, and usually it is jammed packed with lots of fun: new decorations, raving revelers, overheating gift droids, snow ball fights, tinsel bombs, while everything else runs smoothly. Well this year, Life Day broke everything! Okay maybe not everything, but everything having to do with 4.0, plus some extras. Let’s see if some of you have encountered some of these bugs. 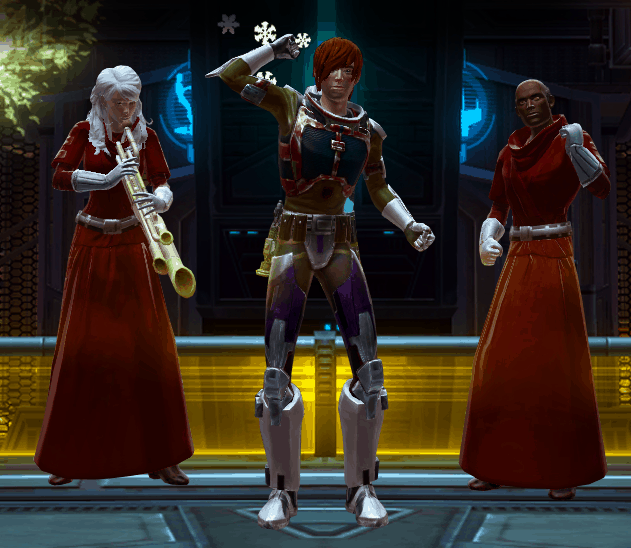 Some of us earn our millions of credits from the exchange market, the GTN: Galactic Trade Network. Some of us have crafters who craft same items, such as Bonded Attachments and Assembly Components or Cell Grafts. I noticed that when I was on my Warrior, I wasn’t seeing my Main’s Bonded Attachments on the GTN. Then I noticed the same happening between my Commando and my Assassin with their Farium Components. I thought this was strange so I investigated further, worried the GTN itself was broken. No! Everything else (mostly) seems fine, the things I’ve been crafting for ages appear on all GTNs from all Strongholds and I can see everyone’s items perfectly well. It’s only with the new items, that came with 4.0, such as Bonded Attachments and Assembly Components.

It wasn’t just a question of logging in and out and the GTN showing random items, it was every time I closed the GTN window and then reopened it. I was on my Commando and I opened the GTN once, could NOT see my Assassin’s Farium Components. My Trooper puts hers on. I saw people were posting stacks at 300K a stack. On my Assassin I’d seen one guy post them at 5Mil a piece (he obviously thought he was the only one putting them up on sale). I “X” out of the GTN. Open it again. Ahah, I can see my Assassin’s Components, but where are my Commando’s? Hers were not there. I close and reopen again, oh, back to the other way, sometimes I saw both, happened once on 7 times.

Other GTN bugs include the Life Day colour scheme Dye Module (Primary Dark Green Secondary Deep Red), cannot see them at all when searching, only appears in the Sell List, same thing with the Hiridiu Crystals. Rainbow Gems at least appear when searching generally in Crafting materials, Treasure Hunting. If you type the name or Shift left click, they do not appear.

Then there’s the Rakghoul plague event, T.H.O.R.N. Of course they decided to throw in Rakghoul at the same time as Life Day AND Double XP. While I always shy away from fleet during that time (since I don’t want green bodied glowy eyed folk exploding near me),  this time, it’s been snow balls and revelers and no plague. Our Imp side Guild Leader reported that she was all set to go down into the tunnels for the Dr. Lokin mission, she went down the Spike, and as soon as she was in the tunnels, she got kicked out, when she started walking. It kicked her out and she appeared back on fleet. Rakghoul is now linked to 4.0 due to Dr. Lokin, could this be the reason of the bug?

Apparently the Voss weekly was bugged as well. Another change they did was make us all level sync to the planet we’re on. A guildy of mine was doing the Voss weekly mission, when he was done, the mission status still said to complete the weekly to get the weekly rewards, yet he had just completed all the Heroics associated to the weekly. Same thing happened to me, picked up the Heroics from Odessen, got rewards for each, but the Weekly part gave no reward, status said it was incomplete.

Speaking of weeklies, the Imp side GL also reported to me that the Conquest Goals for the week were out of sync, the goal points that she got were not what had been listed. She thus stated it was broken. I’m not a big fan on conquests, but some of the rewards are nice and several in the guild do them every week, so I can understand the frustration. 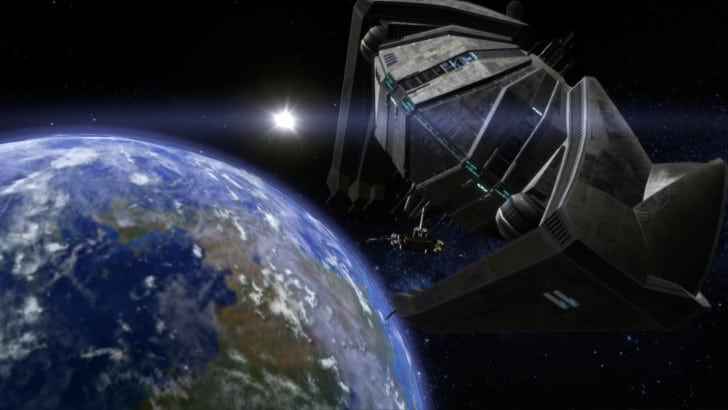 But wait, there’s more. Oh, I had the brilliant idea to start a Heroic Star Fortress, and yes we chose Nar Shaddaa, perhaps a bad choice given Nar Shaddaa was already saturated and lagging with people throwing snow balls and shooting snow canons at Overheated Gift Droids in order to get trees and Snow Covered Parcels. But we were doing it and ALL of us were lagging like crazy. There were times my screen froze with laa-aa-aa-aa-aa-gg-gg-gg-ss. Yes audio lags too. So I decided to lower my settings. To Very Low, the lowest it goes and it changed NOTHING. Absolutely no difference in lags. We were three plus Lana. We still managed to get all the way to the Exarch, which is pretty cool, considering the lags, and the upscaling in difficulty, but it did take us a full 3 hours, which is not normal. The lags killed us. And again, something having to do with 4.0.

These bugs are not only random and inconsistent but amazingly annoying too. Lags from the infernal mud pits of Hutta! Seriously. And I’m willing to bet there were a bunch of other things I didn’t notice, since I don’t do PvP, Space or GSF.

I’ve gotta say however, I did get to indulge in some new decorations and acquired myself a nice Life Day pedestal, fireplace and ambient snow storm. Below is a screenshot of my Yavin Stronghold, a corner of my Bounty Hunter’s area, where I’ve put the pedestal and Ambiant Machine. I also have some icle mounds from last year and an icle lamp as well, snow blower (off screen), and you see in the image a nice cooling unit blowing cold air on the loveseat. I mean, it’s a nice place to…chill…with friends, no? 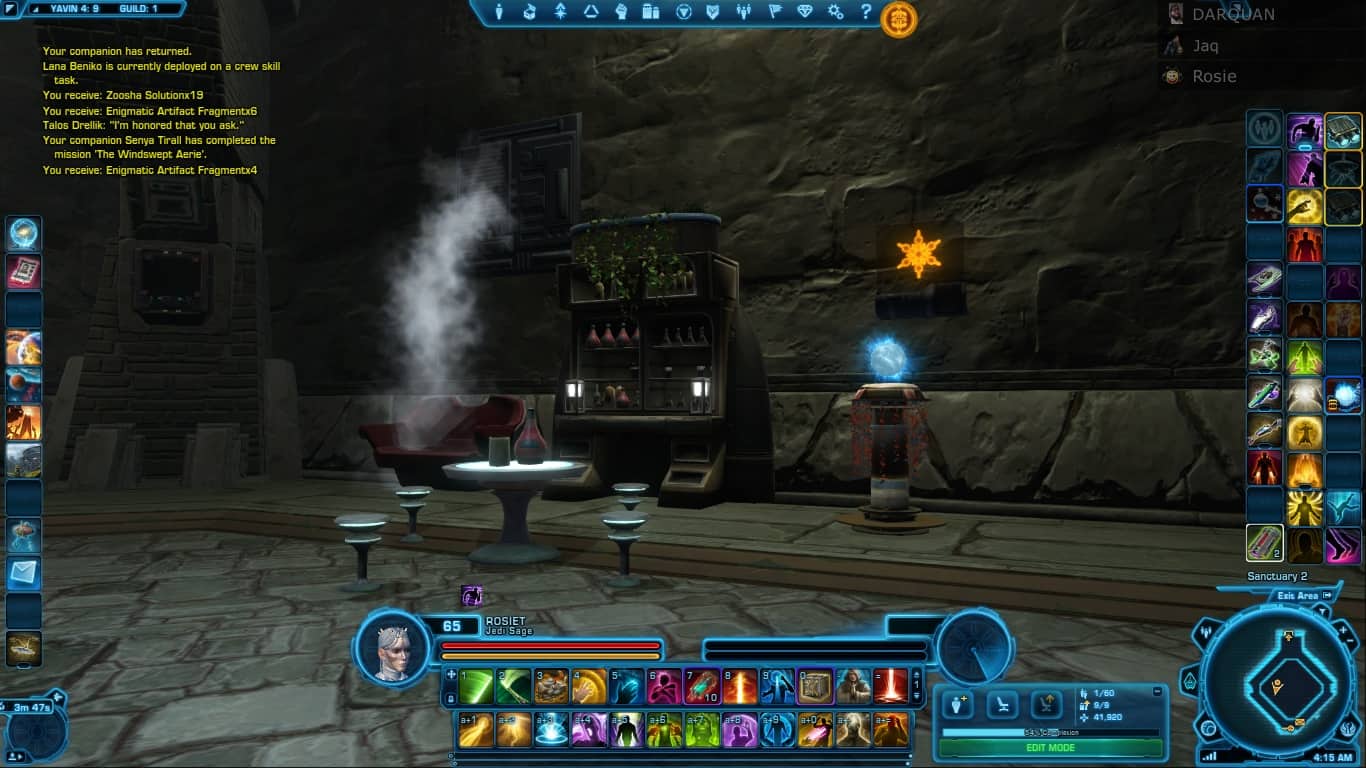 That being said, I enjoyed this year’s Life Day, despite everything else acting like it had been pulled out of a Hutt’s…well, you get my meaning. It’s always a fun time to get festive and sport the Green Red dye module on outfits that don’t really look good in those colours. Our Imp side GL, as well as a few others I saw on fleet and Nar Shaddaa, were sporting that dye module with the Marka Ragnos (reindeer) horns and the Satele Shan outfit. It fit and looked funny. I also now have enough Holo Trees for a bunch of strongholds and to sell or give away. Let’s hope the GTN gets fixed soon, my in-game wallet depends on it. 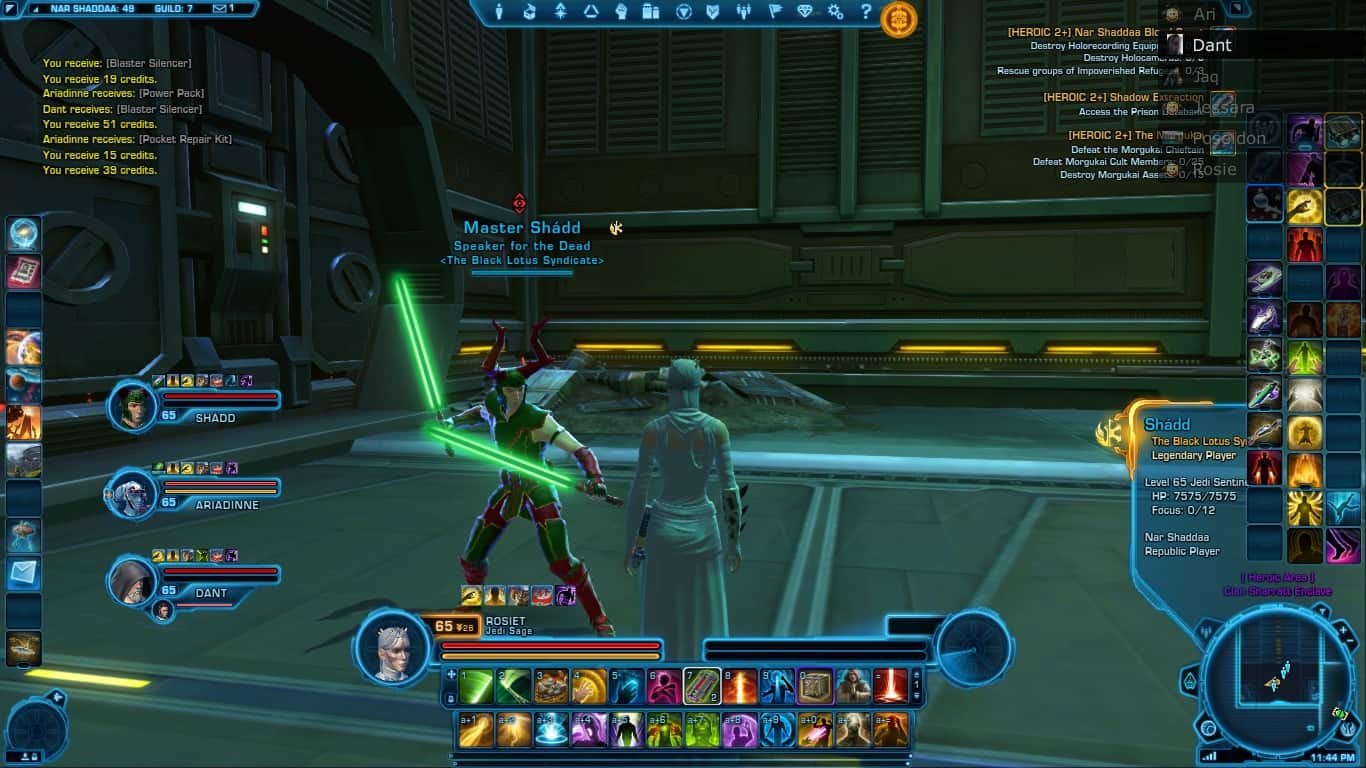 Thanks for reading. I’d also like to thank my Guildies Jaq and Poseidon for their feedback on bugs they encountered for me to add to this blog. And I thank Jaq for having Master Shadd (one of her characters, in screenshot above) pose for me so readily.  Feel free to make any suggestions in the comments on SWTOR topics you’d like me to cover in future blogs (opinions, anecdotes, reviews, content, trivia, etc.).