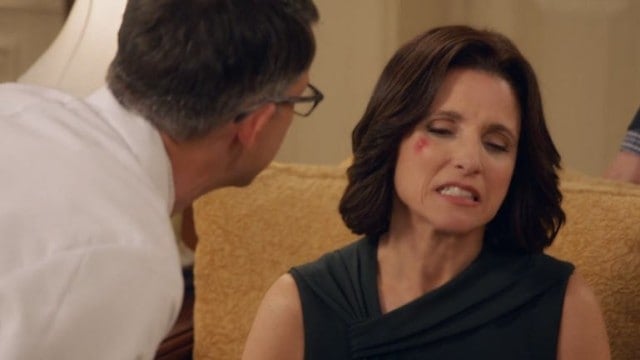 The fifth season of HBO’s Veep was always poised to become a victim of expectations. The show had benefited from remarkable consistency over four seasons, but plenty of shows grow long in the tooth by season five. Series creator Armando Iannucci also left the show after season four, a bad omen considering how fundamental he was to the show’s tone and approach (it’s basically a remake of his earlier British show The Thick of It, just transposed to the highest office in America). Fear not, though; new showrunner David Mandel manages to perfectly carry on Veep’s style of comedy.

At the end of last season Selena was tied in the Electoral College with her opponent. Things are worse at the start of “Morning After”: she’s won the popular vote (which is essentially meaningless), but she’s losing in a hypothetical vote of the House of Representatives. Then the count in Nevada gets close enough to allow a recount, which could put Selena over the top and get her enough electoral votes to win the election.

While Selena is dealing with an electoral crisis, she’s also dealing with another one on the dermatological front. She’s got a stress pimple that keeps getting larger, despite Gary’s obsession with trying to cover it up. It’s so noticeable that it’s potentially responsible for a huge drop in the Dow during Selena’s news conference. She schedules a racial issues conference to try to draw attention away from the plummeting market, but find that’s that all of the representatives from the HBCUs are White. Her lilywhite conference on issues affecting the African American community doesn’t go over well, but it’s cut blessedly short when Mike accidentally sets off a fire alarm. 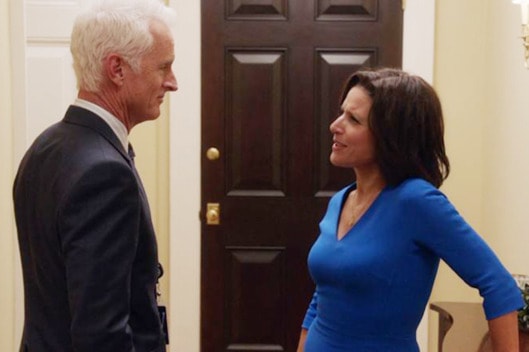 “Nev-AD-a” opens with the ongoing recount. Richard Splett, usually a doofus, turns out to have a doctorate in constitutional law focusing on recount procedures in the West (and one in veterinary medicine as a fall back). The problem is that he’s so wise to precedents that he can spout out past decisions that actually help Selena’s opponent. He gets sent out with Jonah to visit voters whose ballots haven’t been counted, while Amy and Dan advocate for Meyers votes during the recount.

Back in Washington, Selena is looking for someone to start a new economic task force. Her running mate Tom James (House’s Hugh Laurie) seems like an obvious choice, until Selena meets Charley Baird (Mad Men’s John Slattery), a wealthy businessman, and almost immediately starts sleeping with him. Slattery always plays the same kind of charming and somewhat slimy character, but he’s often electrifying on screen. The episode ends with two developments: Selena has secured enough new votes in Nevada to get a state-wide recount, and the press has figured out that she’s seeing Baird.

Last season felt a bit scattered at times because Selena’s aides were scattered all over, with Amy and Dan working as consultants after being kicked out. Selena brings the both back in her desperation, and the show runs much smoother with the whole team back together. It’s also almost unfathomable how the show’s writers still manage to come up with such fantastic and profane insults. It could have become a cliché by now if the swearing wasn’t still so fresh.

For an HBO series, getting five seasons is practically geriatric. This could have been where Veep started to coast on the good will it has accrued in the past, but instead it’s moving forward full steam. The show boasts one of the best casts of comedians and improvisers ever assembled, and if their work in the first two episodes of season five are any indicator, the rest of the season will continue Veep’s winning streak.