The revelation from last week’s episode of Vinyl was that the show can be hilarious when it wants to be. It was a necessary discovery, because Vinyl would eventually implode if it chose to wallow in the darkest elements of Richie’s attempt to save his record label. “He in Racist Fire” backs off a bit from that episode’s tone, but still retains a fair amount of the lightness. Rock music has to be fun, and this week the show figured out how to move back into a more serious element without totally diminishing the comedic parts.

Richie is desperate to discover new bands to lift up the label, but also to stock the new imprint that is still in need of a name. In addition to finding new bands, Richie absolutely needs to keep his biggest acts, in particular Hannibal. Richie arranges for Devon to accompany him at dinner with Hannibal and his secretary Cece. In the episode’s most interesting scene, Hannibal shows off his skills with anagrams, rearranging Devon and Cece’s names into seemingly meaningful phrases. Richie’s is darker and foreboding: “He in racist fire.” After dinner devolves into a coked-out dance party, Richie starts to panic when Devon’s dancing with Hannibal becomes increasingly sexual. When he drags Devon away he makes it clear that he’s not just threatened by another man’s advances, but by the fact that it’s a black man. Devon, who has just been playing a part to help Richie, gives up on the act and slaps Richie and walks away into the city. Richie betrays his old-fashioned mindset with Hannibal; it’s only the money that matters, not the champagne or the cocaine. 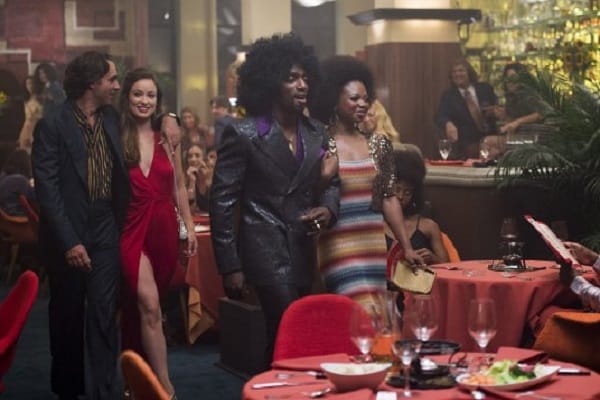 Meanwhile, Clark is almost fired at American Century until Julie pities him and merely demotes him down to Jamie’s job. Of course, Jamie wants a raise then since she’s doing Clark’s job, which Julie rebuffs. Later, Jamie has lunch with the woman who previously called the cops on her, who turns out to be her immigrant mother. She runs a business which Jamie has failed to take the reins of. Jamie is also working closely with the Nasty Bits, who have been ordered to fire their subpar lead guitarist by Richie. Kip isn’t able to let go, so Lester does the deed while Kip spends more time with Jamie. We see that Kip is using heroin, so the question is whether or not he’ll drag Jamie down with him.

I’ve complained in nearly every review of this show about how it failed to develop Jamie at all, and this was the first episode to give her enough screen time. It was a refreshing change, seemingly accomplished by giving the executive board shenanigans a break. Temple is an interesting actor who deserves more development. While her role gets a little more fleshed-out, Richie’s undergoes a transformation. He’s previously been portrayed as a bad boy, an impetuous rule breaker, but his orders for the Nasty Bits turn him into The Man. Richie thinks of himself as a rebel, but he’s really a boss.

In the future, it would be wise for Vinyl to explore Richie’s dualities. He adores artists, but he’s perfectly willing to compromise their artistic vision in the name of success. Jamie might even become his foil, the true believer in opposition to the cynical businessman. There’s interesting terrain ahead if Vinyl chooses to explore it.