The biggest stumbling block that Vinyl has to avoid is how it portrays mid-‘70s musicians. These were larger-than life-figures who wallowed in excess; we’ve imprinted their very public lives onto our collective consciousness. Most guest actors are simply too reserved to pull something like that off. “Whispered Voices” finds a way around that dilemma: you just have to find a rock star who’s a regular guy.

Unlike the absolutely stuffed pilot and last week’s still quite busy episode, episode three manages to find a somewhat more measured pace and allows the audience to catch their breath. The best segments feature Clark Morelle (Jack Quaid) as he tries to entice Alice Cooper (Dustin Ingram) to go solo and sign with American Century. Cooper is a fascinating figure because of how boring he is; the feminine name and proto-goth makeup barely concealed a witty guy who loves The Beatles and likes to play golf. Somehow those two personas manage to coexist without strangling each other. Ingram gets that salt-of-the-earth aspect just right as Cooper spends a debauched few days with Clark. Clark, one of the most straight-laced people at American Century, gamely plays along with the naked women and boa constrictors, but it’s all for naught: Cooper is just toying with him as a belated form of revenge for how Richie mistreated the band years ago. He doesn’t have any plans to go solo. (His resolve obviously didn’t last long.) 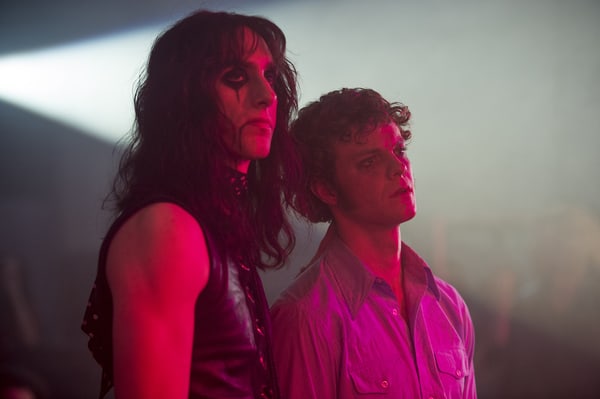 Although he’s the series lead, Richie feels more like a background character this week. Bobby Cannavale is a dynamic actor, and his more subdued storyline leaves the episode with a gaping hole. Unfortunately, there may not be any way to give all the characters their due without pushing Richie into the background.

Richie is still dealing with the aftermath of scuttling his deal with PolyGram at the episode’s start. He has to cut seventy percent of American Century’s artists, and only a select few (Grand Funk Railroad, Thin Lizzy, and of course, Donnie Osmond) make the cut. Outside of his business obligations, Richie’s mind wanders into the past. After being reminded of his old boss at the end of last week’s episode, Richie decides to visit Lester Grimes, the blues musician that he threw away when their relationship became inconvenient. Lester’s voice was destroyed when he was assaulted by some mobsters after refusing to perform anything other than his own music, and now he’s working as the super at an apartment building. Richie’s guilt hasn’t risen to the level of trying to help Lester yet, but it’s pretty clear that they will continue to reignite their relationship.

Richie’s also living with guilt from the crime he committed in episode one. A steady stream of cocaine mostly keeps his mind off it, except that Joe Corso (Bo Dietl) keeps trying to insinuate himself in Richie’s business. After reassuring Richie in the previous episode, Corso has decided to taunt him with innuendos. He also tries to blackmail Richie into signing his new girlfriend. It seems relatively innocent, at least until the body is discovered late in the episode.

While Richie is filled with anxiety, Devon is seething at him for stopping the PolyGram deal. She’s been trying to put on a fundraiser for a ballet troupe that Richie originally talked her into as a hobby, except now he can’t afford to donate anything to the fundraiser. Devon has a Warhol portrait from years ago, so she sets up a meeting with him in order to get a signature on the painting (which would considerably raise its value). Warhol agrees to sign the painting, but he requires payment in shame and embarrassment from Devon. He videotapes her as she asks for the signature, closing in on her face to highlight her desperation. Warhol’s screen tests were about breaking down his subject’s defenses and putting himself in a position of power, which the scene captures well. When Devon presents the signed painting, worth at least $20,000, the fundraiser organizers just ask her for another $10,000.

And then there are the Nasty Bits. So far this show has treated the band and Juno Temple mostly as an afterthought. The proto-punk band gets cleaned up for this episode, only for Richie to lose interest until he hears them at their original scuzzy best. It was obvious how the episode would play out from the beginning, making it little more than a formality.

Vinyl managed to slow the pace for this episode so that it was less a rush of images and more an actual story. However, there are still too many moving parts. The show may need to follow the lead of American Century and learn to cut some of the fat.