With comic book adaptations coming out at a rapid pace, fans will meet many new characters with extensive backstories. We’re here to introduce these characters to help lessen the learning curve. 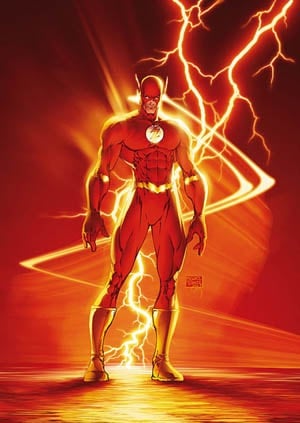 Fans of The Flash on the CW have already met two Flashes: Barry Allen and Jay Garrick, and there’s already a third waiting in the wings. Wally West, as played by Keiyan Lonsdale, is Iris West’s brother and Barry’s adopted sibling, but his comics beginnings show that he’ll be a Flash some day.

In the comics, Wally is Iris’s nephew, making Barry his uncle. The two had a much stronger relationship, with Wally treating Barry as a father figure and spending a great deal of time as his protege. Eventually, the accident that created the Flash repeated itself and turned Wally into a speedster as well. In a yellow uniform with some red accents, Wally became Kid Flash, the fastest kid alive.

Eventually, a disease started to age Wally whenever he used his speed, forcing him into retirement. During Crisis on Infinite Earths, the Anti-Monitor accidentally cured Wally, allowing him to use his powers again and become the Flash following Barry’s sacrifice. Save for a brief period when Bart Allen took the title, Wally was the Flash from 1986 to 2008 (when Barry returned during Final Crisis), making him the true Flash to many fans.

And it’s easy to see why: Wally was a happier, more approachable hero than his predecessor. Barry was very much a straight man in the comics; he was as dedicated to truth, justice and the American way as Superman. Being younger and written primarily in the 1980s, 1990s and 2000s, Wally was given a more nuanced personality that fans could relate to more. (Notably, the CW’s Barry is much closer to the comics’ Wally than his own comics counterpart.)

for The Flash. The former used Wally’s speed to examine his personal life, often using mental and psychological barriers as the primary challenges that Wally needed to beat to become a better Flash. The latter greatly updated the Rogues, making them more menacing for contemporary comics while keeping the charm of their old-school villainy.

Most notably, Wally became the voice of reason for every team he was on. Whether he was in the JLA, Young Justice or Teen Titans, the Flash always stood up to heroes who were on the verge of going too fair or whose versions of justice started to become perverted and self serving. This carried over to the animated Justice League where Wally’s death sent the team into a spiral that led to Superman’s killing Lex Luthor. It was also apparent in Young Justice as Wally left the team once it decided that espionage was the best way to fight large-scale crime.

Wally is the Flash that never wanted to be a hero, but took the responsibility. As a character who only wanted to do good for goodness’s sake, he became the one who best embodied the ideals others tried to put forth. Wally West is the Flash that DC’s readers and viewers deserve.