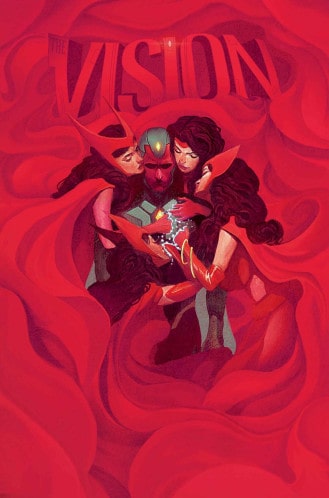 In Vision #7, writer Tom King, guest artist Michael Walsh (Secret Avengers), and colorist Jordie Bellaire take a break from the ongoing domestic drama of Vision, his wife Vivian, and two kids’ domestic drama in the DC suburbs where he lied to a police officer about Vivian’s whereabouts on the night one his son’s classmate died. Instead they kick it Bronze Age style and look at the starcrossed romance and marriage between him and the Scarlet Witch, which began as lovely and joyous, but eventually caused our protagonist to question his humanity. This issue provides a deeper look into Vision’s approach to relationships while King  ties in this extended flashback to his current narrative in an eerie way that has been the overall tone for this series as maybe something isn’t quite right with this longtime Avenger, who from his creation in Avengers #58 by Roy Thomas and John Buscema in a story titled “Even An Android Can Cry”, has been renowned for his range of emotions.

And for most of Vision #7, King and Walsh show a fairly “normal” Vision. He makes a self-deprecating joke about toasters that causes Scarlet Witch to drop her stoic visage and have a hearty laugh and even has a lengthy makeout session with her in the middle of a battle between the Avengers and Nefaria. Walsh draws him with a genuine smile at a dinner with their unique group of friends, which includes a cow evolved by the Higher Evolutionary, a witch, a Golden Age era superhero, and finally Wonder Man, who has the same brain patterns as Vision. But, in the midst of this strangeness, Vision has forged a family. This is the character at his peak in the late 1970s and 1980s when he was a card carrying West Coast Avenger and even co-starred in a twelve issue maxiseries with Scarlet Witch.

However, King decides to dash this happy moment into a million pieces when Vision tells Scarlet Witch that the children she created with her reality warping abilities aren’t real, and there’s a noticeable shift in Bellaire’s colors as she goes from bright superhero action and subdued domestic life to black and finally a sterile white and grey as 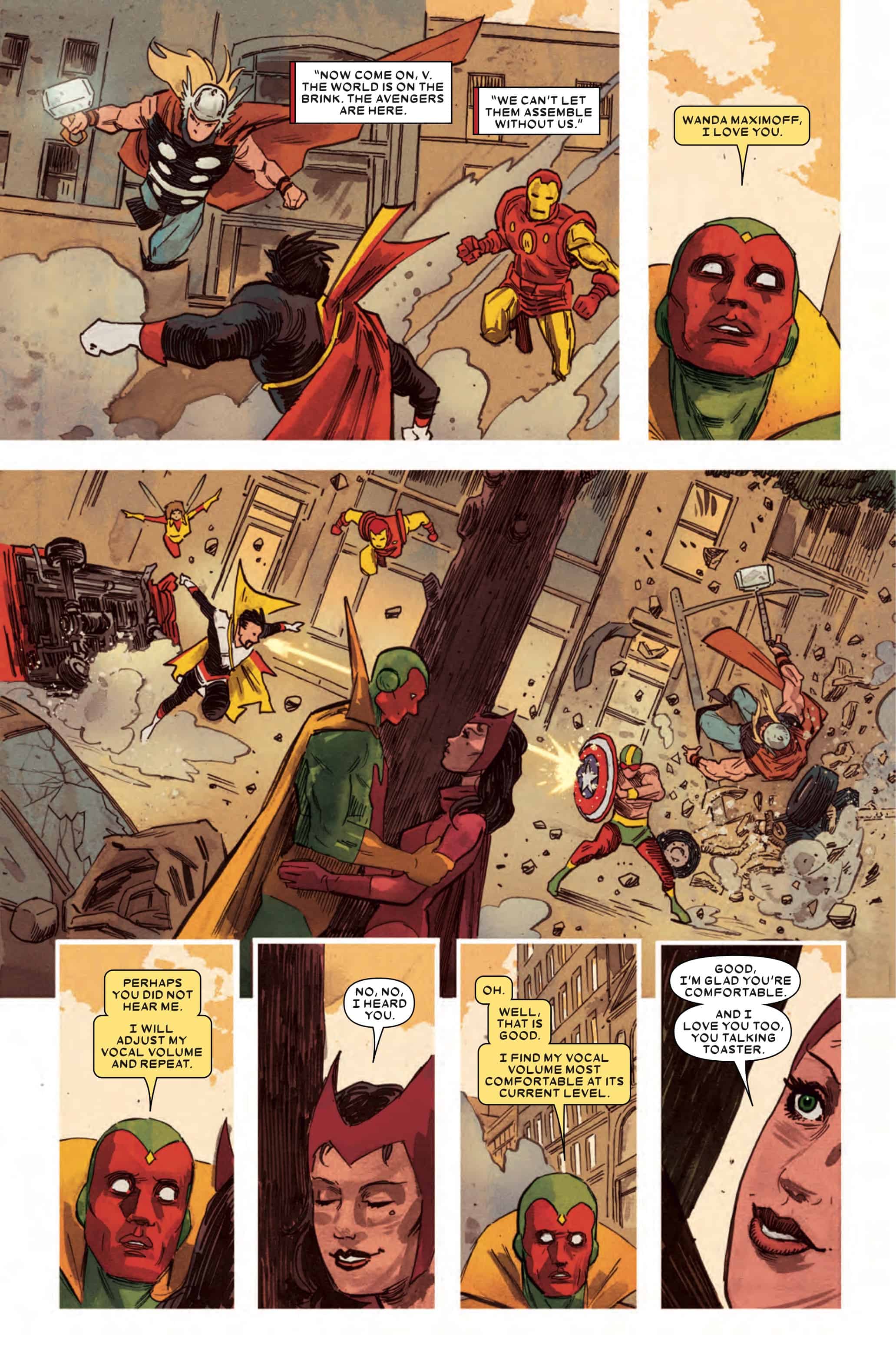 Vision has been rebuilt and has no emotional connection to his wife and “children”. Bellaire’s palette definitely takes the emotional pulse of the issue as she goes from Bronze Age nostalgia to creepy cyborg fiction or plain tragic romance as the toaster joke that amused Scarlet Witch so much early in the issue provokes no reaction from Vivian in the blue twilight of their bedroom. And there is really no in-between when Walsh does faces as they’re either filled with warmth or humanity or cold and emotionless. This works to great effect with the character of Scarlet Witch towards the end when Vision gets Agatha Harkness to wipe her memories of their children that were taken by Mephisto as she sits vacant after getting in a huge fight earlier with Vision. The sequence also shows that without his human brain patterns, Vision is a terrifying being.

Vision #7 is a shining example of using continuity to enhance a series and a character as Tom King uses Vision’s past struggles with deception and starting a family to inform his current reality. There is also a nice twist towards the end that shows why his family in the current Vision is so Stepford-like that is set up by Kurt Busiek and George Perez’s excellent run on Avengers. Vision wants to have the idyllic, suburban life with two kids, a wife, a dog, and PTA meetings and will, but as we’ve seen so far, that this includes compromising his moral and heroic compass. Relationships are organic, not synthetic, and King, Walsh, and Bellaire show this in the flashback scenes with Scarlet Witch that are sexy and adorable at times that contrasts with his current, almost lifeless relationship with Vivian.

Vision #7 might not move the series’ ongoing plot, but it is a tragic look at Vision’s most important past relationship with Scarlet Witch, and how it informs his actions today as Tom King weaves elements of his backstory into the current narrative while Michael Walsh and Jordie Bellaire bring on the waterworks with a look at Vision and Scarlet Witch’s beautiful, doomed love.