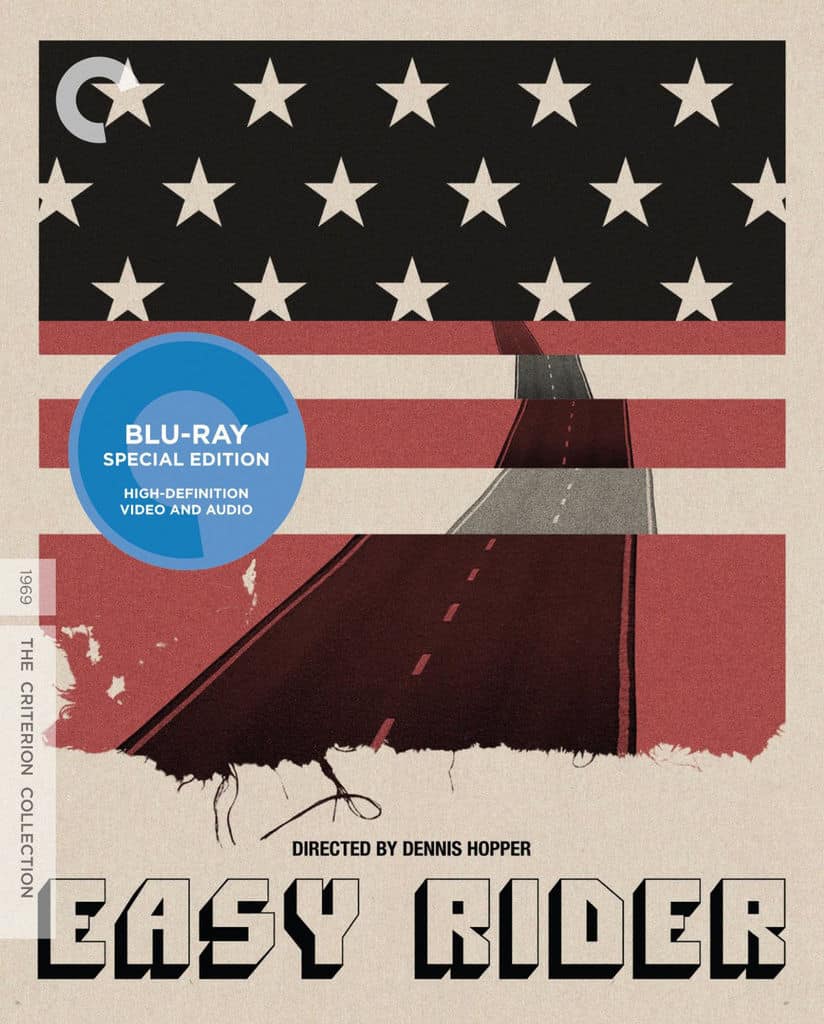 “A man went looking for America, and couldn’t find it anywhere…” With a blistering rock and roll soundtrack, a host of trippy filmic flourishes, and dialogue representing the ideology of a very unique period in history (“They’re not scared of you. They’re scared of what you represent to ‘em.”), Easy Rider is a landmark motion picture and a great independent success. Written by Peter Fonda, Dennis Hopper, and Terry Southern – an iconic 1960s trio if there ever was one – and directed by Hopper (rather haphazardly according to some reports, but evidently well enough), the film achieves a cohesive and engrossing quality, seemingly despite its best efforts. The story is thin and the structure is loose, but with a stand-out performance by Jack Nicholson, dazzling imagery, an accurate and acute sense of time and place, and, again, that music, Easy Rider is a seminal work of American cinema.

When we first meet Billy (Hopper) and Wyatt, AKA “Captain America” (Fonda), their broadly sketched types are immediately apparent. Billy is overly anxious, leery, child-like, and perpetually high as a kite; Wyatt represents the more stoic, calm, meditative, and conscientious version of this duel hippie characterization. We also see at the outset a self-conscious, though by no means unappealing effort by Hopper as director to utilize an array of cinematic techniques. Among the formal devices, he and editor Donn Cambern often use a curious, if initially jarring, inter-scene editing method that functions as a sort of flash-forward/flash-back cutting process, rapidly providing glimpses of the scene to come, then cutting back to the current scene, then back again to the future. This usually continues three times until the scene does finally transition to the new setup. Creative credit should also be given to cinematographer László Kovács, the great image-maker also behind the camera of such terrific and equally era-representative films as Targets (1968), Five Easy Pieces (1970) and Shampoo (1975). There is no question, his illustrative contributions to Easy Rider, an extremely visual film, are immense. 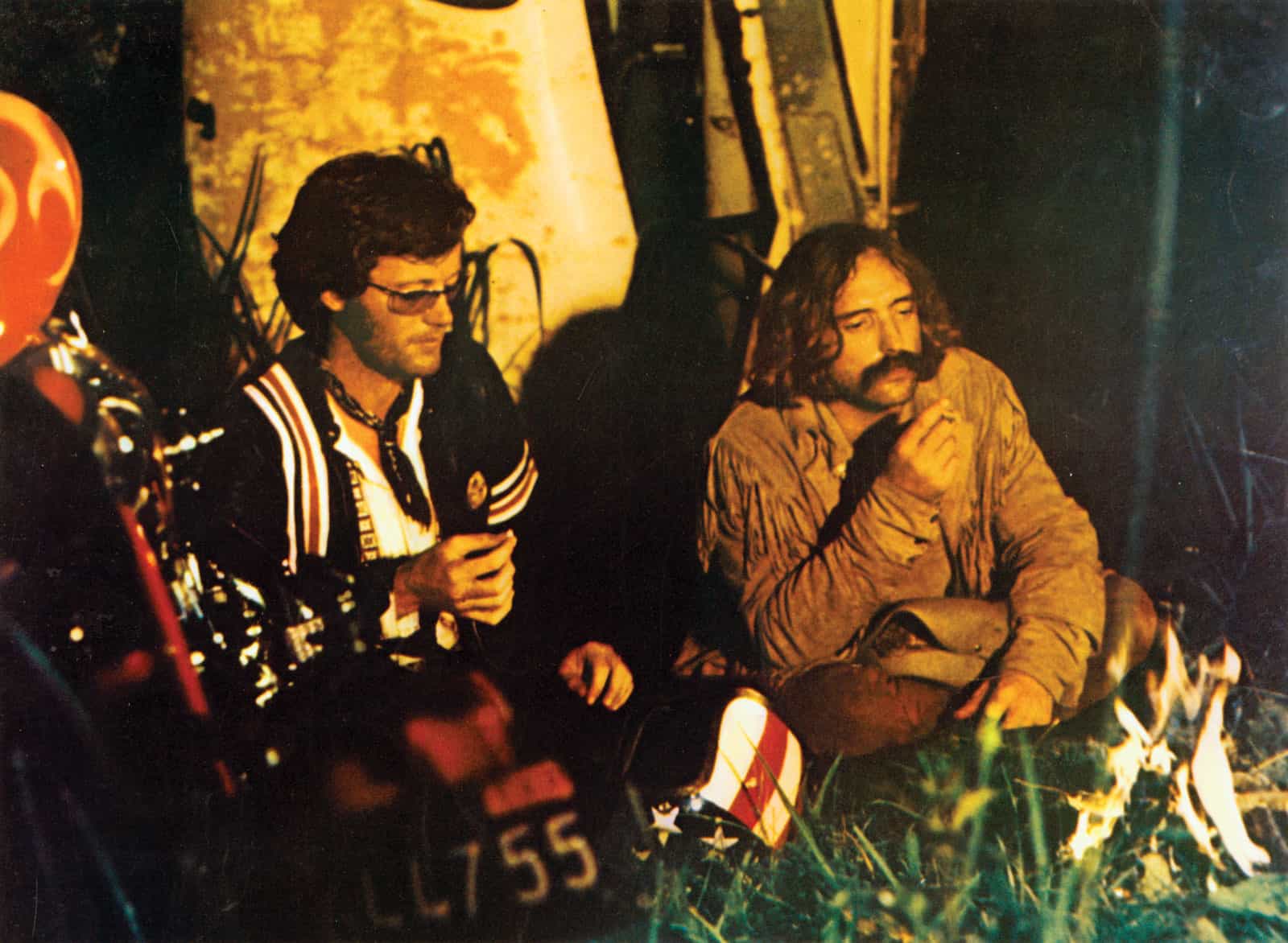 Easy Rider’s philosophic grounding is also firmly established at the off. After a profitable drug deal, Billy and Wyatt have accumulated enough money to head out on the highway, as it were, on a pot-infused road trip toward Mardi Gras. Their notions of freedom and the willful escape from uniform society are admirable in intent (albeit somewhat naive), but too much validity is cut short when one becomes aware of the fact that the whole trip, including their break from said culture, is nevertheless necessitated upon the amassing of the almighty dollar. Even in this hippie/biker culture, American capitalism is alive and well.

While entertaining from the very start, Easy Rider doesn’t quite take off as a great film until about 45 minutes in, when Hopper and Fonda are arrested (for hilariously parading without a permit of all things) and are locked up in a small-town prison. There, like a booze-induced epiphany, bursts onto the screen ACLU lawyer George Hanson (Nicholson), the town’s resident drunk, a “regular regular” in the jail and the character who provides not only a terrific early role for Nicholson to relish in, but also one who gives voice to Easy Rider’s didactic discourse, which it is by no means coy about espousing. We have already heard affirmative statements concerning Billy and Wyatt’s way of life—“You do your own thing in your own time”—but now Hanson offers the alternative, opposing view of things; not that he believes them, but he knows how others see characters like these two and he subsequently explains the threatening symbolism of the two mischief makers. The free-wheeling figures represent freedom, which, Hanson cautions, can be a thorny concept. “Talkin’ about it and bein’ it, that’s two different things,” he notes. “Of course, don’t ever tell anybody that they’re not free, ‘cause then they’re gonna get real busy killin’ and maimin’ to prove to you that they are…. Oh, yeah, they’re gonna talk to you, and talk to you, and talk to you about individual freedom. But they see a free individual, it’s gonna scare ‘em.” 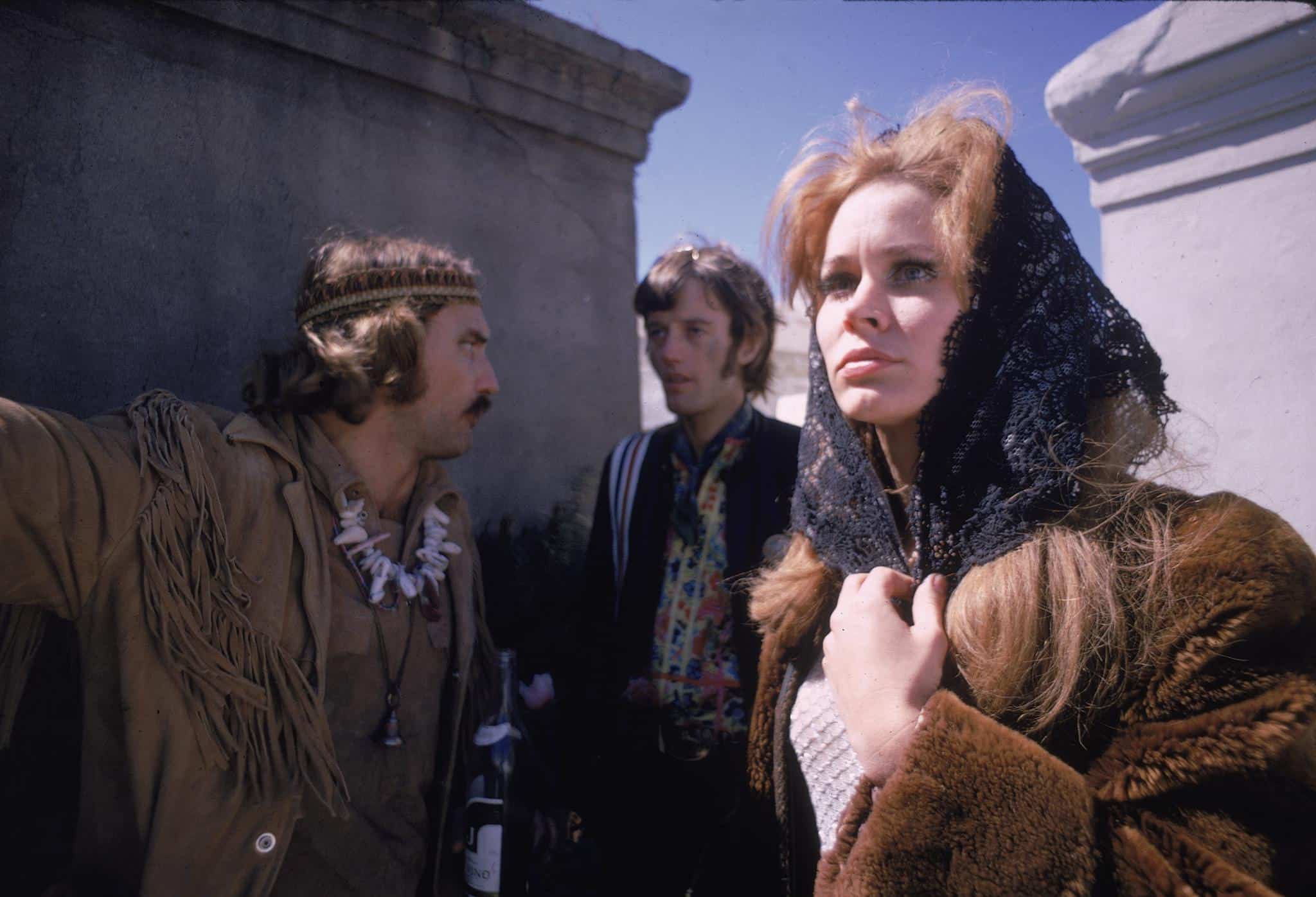 After a stopover in a volatile town where “they’re trying to make everyone look like Yul Brynner,” according to newfound friend Hanson, the three are brutally beaten in their sleep and Hanson dies. Jaded and warped by this horrific incident, Wyatt and Billy continue on to New Orleans. There, after visiting a whorehouse of Hanson’s suggestion, they take two women (including the always wonderful Karen Black) through the festive streets and finally end up in a graveyard where they drop acid. Unfortunately, this is the wrong time and the wrong people, contrary to the acid-giver’s instruction, and things go badly in a kaleidoscopic sequence of sights and sounds, distorted and mottled in a nightmarish mélange of varied film stock.

It is after this, back on the road, that Easy Rider reaches it tragic and (in)famous conclusion. The film’s idealism has been firmly opposed by cruel realities, and when Billy somberly declares, “We blew it,” he is alluding to a wider cultural disappointment and a national failure. Easy Rider has much to do with notions of hippie enlightenment, but at the same time, it appears to approach such issues rather cynically. Still, the fact that it was such a success indicates it was very much tapping into a present and popular cultural zeitgeist all the same. During this tumultuous period when youth culture was cinematically represented—in Hollywood, at least—by Doris Day and beach blanket bonanzas, this representation was decidedly more authentic, in terms of settings, clothing, sentiment, and, of course, drug usage.

There is scarcely a scene of Wyatt and Billy on the road that does not pulsate to the tune of Easy Rider’s phenomenal classic rock accompaniment. The music is not necessarily an overt commentary on the action (though many times there is a general commonality between narrative and musical subject matter, namely in this case, again, drugs), nor is the music emotionally manipulative, in the sense that it sweeps one away in sentimental rapture. Rather, it is simply there—great music over two men riding their bikes through a vast landscape; the music’s placement for its own sake, oftentimes independent of what is seen yet also complementary to the imagery, is in a way a precursor to the music video form set to emerge years later. 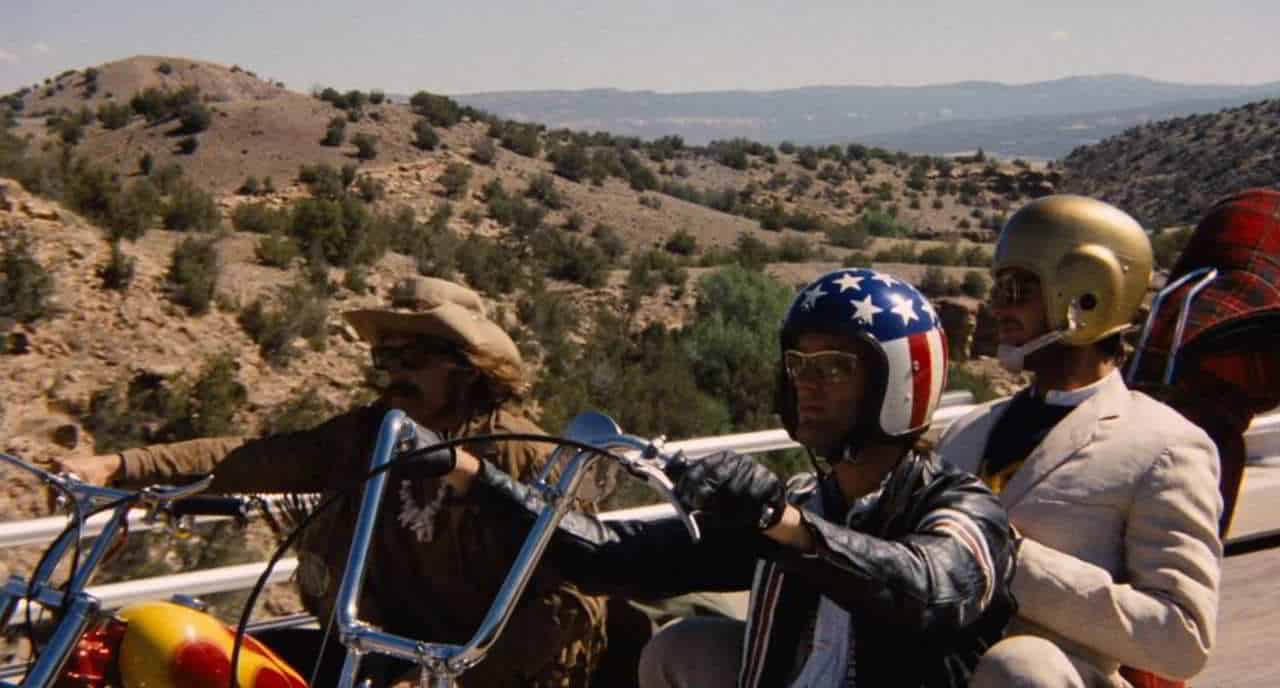 A generic comparison is also notable when it comes to Easy Rider. Its obvious allusions to the Western are readily apparent and significant. Aside from the names Wyatt and Billy (references to mythical Wild West icons of the past—the real and embellished versions), the film’s essential image of two loners journeying through the southwest also evokes familiar Western motifs of scenic landscape and wide open possibility. The parallels are also aided in the juxtaposition of motorcycles in place of horses, a point hammered home in a frame that depicts ranchers shoeing a horse in the foreground while, in a strikingly similar position, Wyatt and Billy fix the tire of a bike in the background (curiously, though, Wyatt and Billy are in the barn while the others are outside).

The bikes themselves are literal and figurative vehicles of unimpeded freedom. Billy and Wyatt are open to the environment, with a direct physical closeness between them and the purity of nature. But there is also an associative notoriety to the bikes (aided in large part by previous films), which represents if not lawlessness, at the very least rebellion. In a Kenneth Anger-esque collage of slows pans and lingering close-ups, the hand-crafted choppers are almost fetishized in their graphic and signifying role. 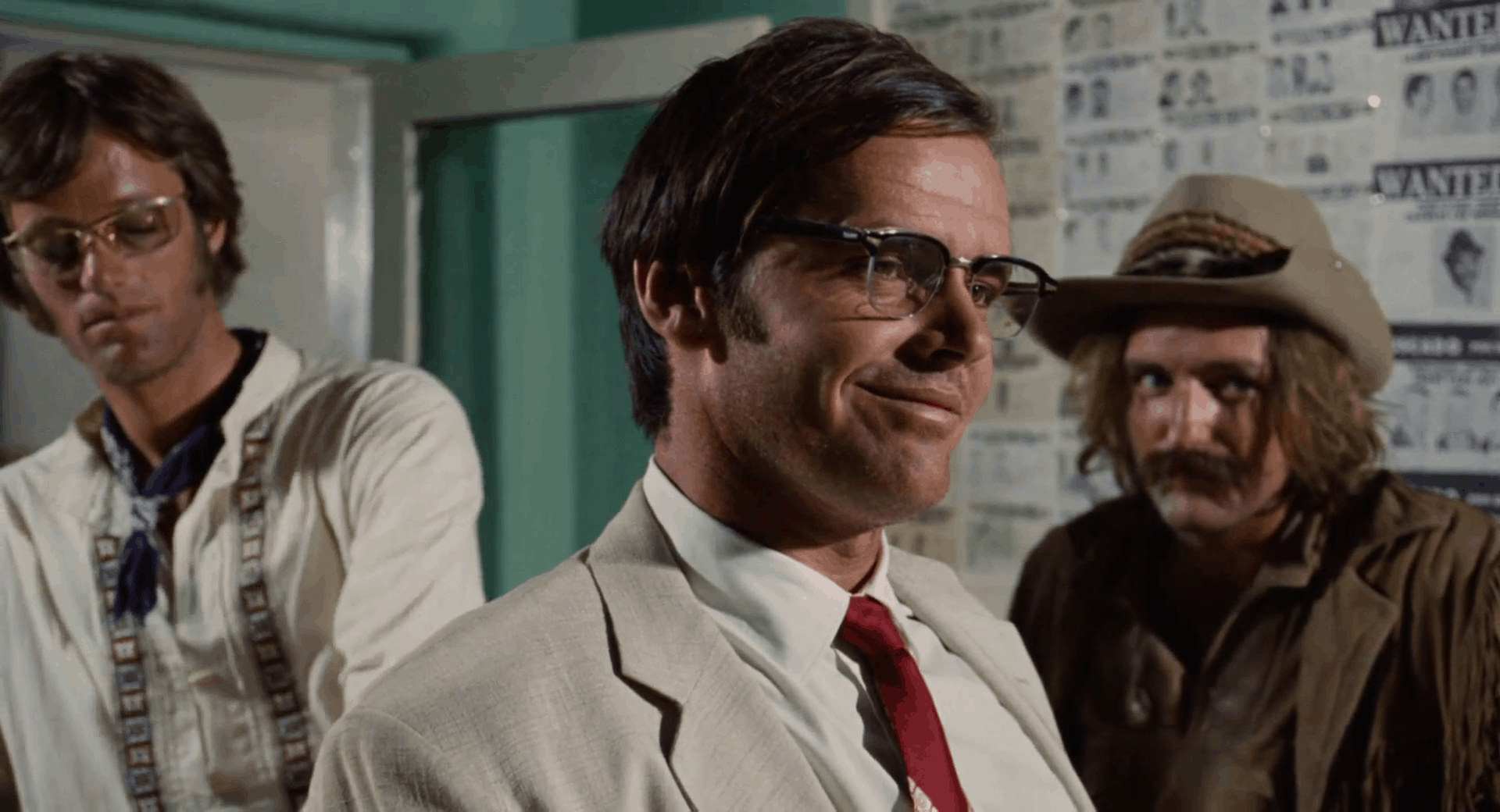 The three main stars of Easy Rider had their roots in the hugely influential film school that was Roger Corman. Fonda had to his credit performances in The Wild Angels (1966) and The Trip (1967), the latter of which was penned by Nicholson and costarred Hopper. But here, in this Oscar-nominated (screenplay and Nicholson as supporting actor) and Cannes-winning (Best First Work) feature, the trio really scored. For Nicholson, the film would pave the way for a decade of stellar work, including such seminal movies as Five Easy Pieces, The Last Detail (1973), Chinatown (1974), The Passenger (1975), and One Flew Over the Cuckoo’s Nest (1975). Though Hopper’s role in Blue Velvet (1986) is one for the ages, neither he nor Fonda would match Nicholson’s ultimate historic importance. Fonda, especially, would never quite evolve popularly from a ‘60s icon, an association cleverly recycled by Steven Soderbergh in his 1999 film, The Limey.

Easy Rider is not just a significant American movie. It is also an exceptional example of independent filmmaking, one where, with the unwavering ambition of youth and a desire for something different, a film rises above and beyond the studio-beholden establishment to achieve a triumph all its own. Determination, relevance, and a reasonable degree of skill combined to create a work that firmly stood, and still stands, as a defining work of a generation, as well as a profoundly transitional phase in American cinema. 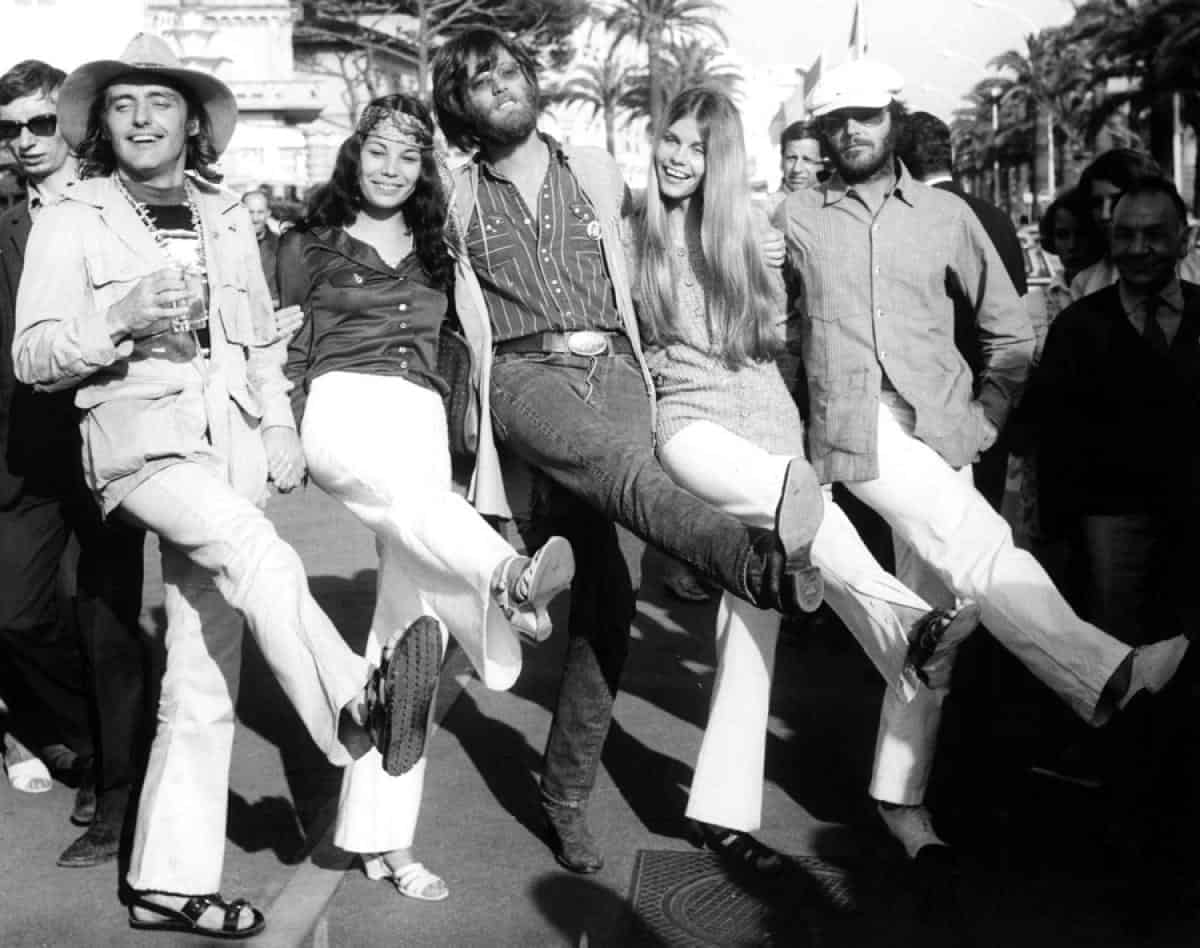