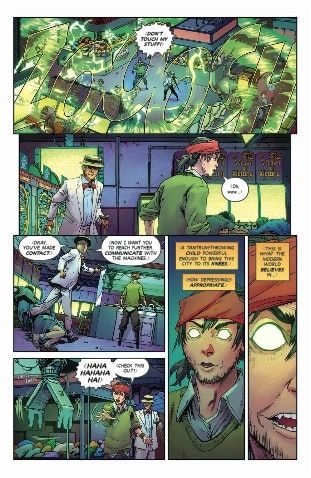 The battle between the yokai and the new supernatural group of Emi, Nikaido, Shirai, Ayane and Rori is just heating up. The young group is still reeling from the battle that took place in the last volume of Wayward and starts to go in a very big direction by the end of this issue. From the looks of it, the conflict between the yokai and the newer generation of supernatural individuals has only just begun and is about to blow into an all out war.

The really great thing about what the creative team of Wayward continues to do is the level of respect and detail that is taken into account when setting a title like this in Japan. It is definitely evident that a lot of time is dedicated to research and an understanding of Japanese society and culture. There is a lot to take in with Jim Zub’s scripts that go beyond this being a fun, fast paced adventure (which there is absolutely nothing wrong with) into a commentary of Japanese society that has difficulties balancing the shift from traditional (yokai) to a more modern and contemporary way of living (new generation of supernatural characters). Having the yokai and supernatural as a basis for the story and tone of Wayward makes the book very poignant, commenting on an ideology that has been supported and fought against since at least the end of World War II. Even though this is a Japanese set title, the idea of accepting a new, younger generation of ideas being combatted by an older way of understanding is something prevalent in the West as well. It is much more complex to explore in Japan than a simple two sided debate, but is something still relevant to the present day.

Diving right back into the issue, Jim Zub’s fast paced, witty script continues to read very comfortably, proving Zub’s voice as one to really consider as one of the more refreshing and confident creators in comics today. He has a very tight handle on the characters and leaves room in every issue for the world and characters to expand; Wayward has a lot of potential to get even more intense. His use of Japanese terms (expanded upon by Zack Davisson’s excellent bonus essays) also shows his ability to incorporate and enhance the reading experience. 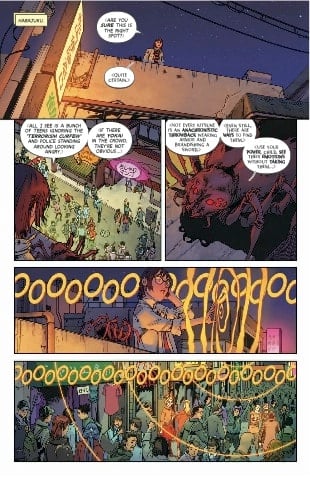 Steve Cummings’s attention to detail in the emotions of the characters faces, the background environments like the arcade and the streets of Harajuku, and even the costume design all deserve a round of applause. The city of Tokyo and the characters’ actions within truly come to life through Cummings’s line work. All one has to do is come across a lively action sequence such as the fight between Ayane and Nikaido at Harajuku with the kitsune (foxes) to get a real sense of the hectic, vibrant nature of Wayward. That isn’t to say the meditative and quieter moments aren’t handled well as there are some truly great, emotional moments in this issue.

The emotional tolls of past events are starting to catch up with the array of main characters. Emi is still reeling after encountering her parents who don’t even have a memory of who she is and Ayane’s frustrations with Rori’s struggle to handle the strength of her powers sets Ayane off on the already mentioned violent battle with the kitsune at Harajuku. The teenage angst and how it is dealt with draws out some very erratic actions, showing that none of the characters still have a decent understanding and ability to control themselves. Even Nikaido goes full blown Scanners at one point.

A new character named Segawa, introduced in the last issue, is a social outcast who has the powers to manipulate technology. He is currently being tested by one of the leaders of the yokai and is being recruited to their cause of bringing down the new generation of supernatural individuals. Segawa’s addition isn’t the only new pawn to the war being prepared as the competing side brings on a new recruit as well in the form of a ronin (masterless) kitsune named Inaba.

Tamra Bonvillain’s colours enhance the vibrancy of the multiple Tokyo neighbourhoods, as well as the detail of the main characters and random bystander’s clothing. Her use of red and green really pop out of the pages this issue, pointing to the tension between Rori and Ayane. Marshall Dillon’s lettering respects the very busy frames of Wayward, allowing for plenty of space and detail to be absorbed within the surroundings.

Wayward #12 really kicks things forward for this arc by exploring further the new character introduced from the last issue, and introducing yet another new character that really mixes things up. The yokai now have a ‘modern’ mind on their team, while the new generation have a ‘traditional’ yokai of their own. Wayward has truly yet to disappoint and is definitely one of the more fun and colourful comics on the stands that continues to have plenty of unexpected twists and turns.

Lastly, since Wayward focuses on the yokai of Japanese mythology and folklore, it was very unfortunate to hear of the passing away of manga and yokai mastermind Shigeru Mizuki. Wayward is indebted to Mizuki’s wonderful and imaginative exploration of yokai. His brilliance and impact is summed up with a beautiful post by Zack Davisson. As Davisson says, otsukaresama deshita.