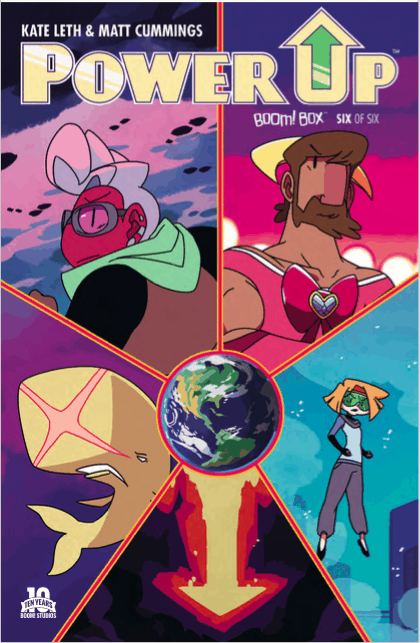 Well, all good and fun things must end. Power Up! #6 is the last issue of the series, with no announcement of a sequel or ongoing status currently. How does it stack up as a finale though?

The issue picks up directly where #5 left off with Nox and her crew discussing with Kevin and Amie how they could possibly talk to Silas. This gives the reader a better chance to know Rowan, who is very lovely and point blank in a very alien way.

Sandy is trying to get a hold of her family, which leads into the big climatic fight scene of the series, with Nox’s group and the Canadian Power Quartet going against a giant armored snake who was the right hand of The Gryphon from back in issue 3. Once again, Cummings’ strength for fight scenes comes into play as the eight of them fight against him in an explosive and climatic scene. Even with the rushed pacing, between the character moments and the art, the climax of this story is probably the best fight scene in the book. As it should be. Not to mention that the way it ends could induce goosebumps.

After that, the book has a very anime ending. Rowan and Nox stay on Earth to help the quartet between training and figuring out just how to talk to Silas and unlock all his knowledge in the first place. This is where the final issue plays to Leth’s strengths, giving the characters a happy and warm ending as they progress on with their lives and new powers, revealing just who our secret narrator of the book was all along. There are hints of a deeper continuing story, which is a bit frustrating knowing that this will probably be the last time we see these characters. For now, our heroes are working together and starting with a new lease on life. With snappy clothes as designed by Cummings, of course. Even with hints of a new story, the last few pages tie everything together to deliver a solid and sweet finale befitting this comic.

See also  'Adventure Time' # 37 has no one making bacon pancakes 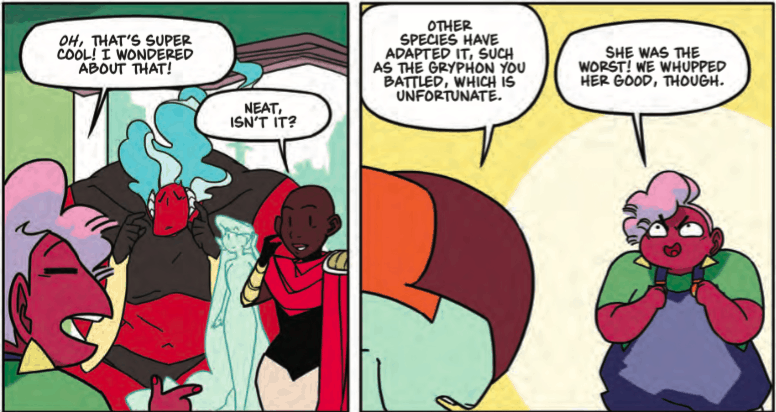 Power Up! had its flaws, mostly with the odd pacing that would have some issues drag on, but others feeling rushed. However, the world created by Leth and Cummings was rich and warm, with a premise borrowed from years of magical girl anime being filled with lovely characters of varying ages and walks of life. It was fun, sweet, and gorgeous to boot. Even with its problems in this issue and beyond, Power Up! is and was a lovely and homey magical series that shows just what makes the genre and the creators special.