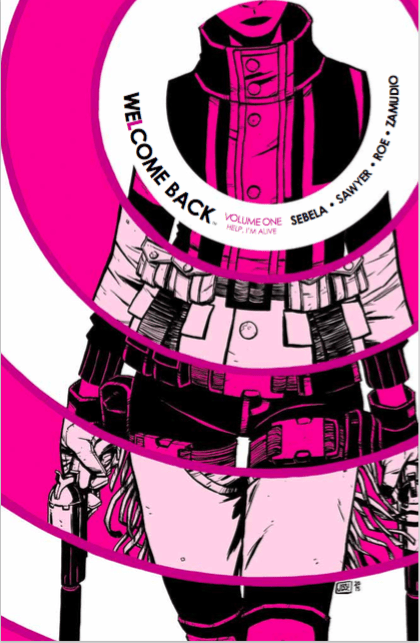 Reincarnation is a story device possibly as old as story itself. There’s something of a natural curiosity of what happens after we die and the possibility of coming back as someone else when it’s all said and done. Do we learn anything from the endless past? What kind of lives would we live anyway?

Welcome Back deals with a lot of that, but also adds queer assassins and an ongoing war between good and evil to the mix.

Welcome Back follows Mali Quinn, a 26-year-old punk living in Kansas City trying to piece her life together. Besides her past with a serial killer father occasionally popping up to haunt her, Mali lives the typical life of a 26-year-old in this day and aged: unemployed, just scraping by, in a crappy relationship, and with a dog and best friend as her only companions. Well that, and dreams about violent death. The usual.

What isn’t usual though is the guy attacking her at a house party that she can magically fend off despite never being in a fight before. Not to mention a mysterious woman named Tessa who is on the hunt for her too.

Welcome Back is a comic that moves fast and furious from the start, not cutting any corners to get to where it’s going. Sebela does a good job of introducing concepts, but not whacking you over the head with the exposition bat. We get some explanation of what Sequels are as well as some flashbacks to Mali’s previous lives, but this is mostly her story. There’s time yet to learn of everything that’s going on behind the scenes. Let’s see what happens when someone who doesn’t have their life together suddenly learns that they’re a constantly reincarnating soldier.

The art is evenly split between Sawyer and Roe, sometimes even in the same chapter, which can be somewhat disconcerting, but their two styles have a good balance of each other. Sawyer is a bit more stylistic, with his details getting more focused on clothing and facial expressions. This makes establishing in the first two chapters go especially well. Roe’s strengths are more in movements and background details, which is perfect for when the story gets more action driven in the second half of the book. There’s one particular scene in the third chapter set in Atlanta that made it easy to tell that she had done her homework on what Peachtree Center and MARTA look like, making it an especially suspenseful chase that culminates in a major decision for Mali.

Zamudio’s colors bring a good consistency across the board between the two art styles, relishing in all of the dark, bloody and action-y scenes to help create the kind of atmosphere the book is going for. Not to mention the ever so subtle color cues between Mali and Tessa throughout time, emphasizing just how fated the two are, right up to the climatic moment where the two finally meet face to face. 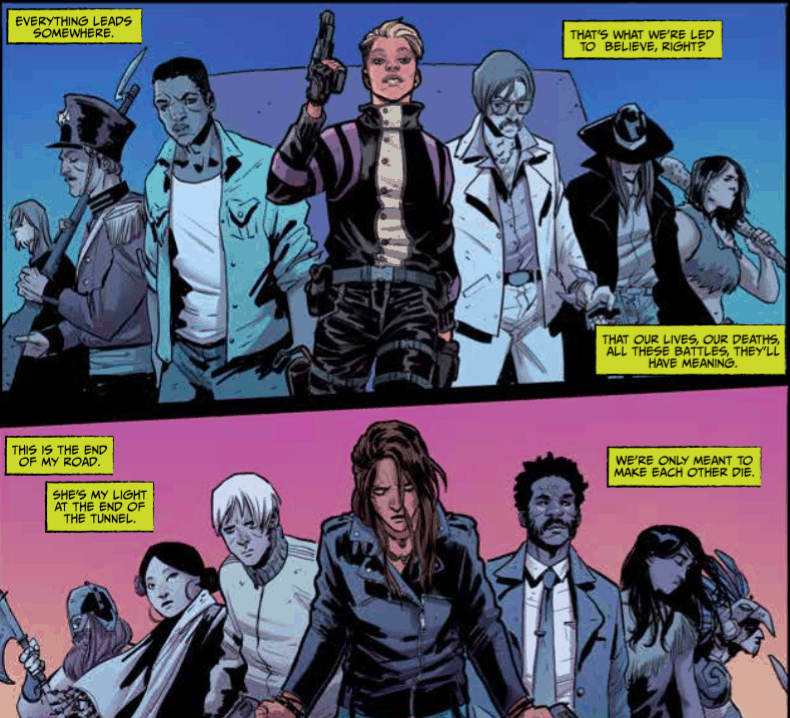 Welcome Back is a superb action story that is simultaneously a classic tragedy. Mali is an extremely relatable heroine for this day and age, which makes what happens to her even more confounding and sad. While there are still lots of questions that need to be answered about the Sequels and the war they’re fighting against each other, the first volume of Welcome Back is not concerned with those things. Just of telling a good story to jump into, and establishing just what these characters have at stake when they could just easily keep the cycle of life and death going forever with no questions asked. If tragic and somewhat immortal assassins are your bag, Welcome Back just might be your book.