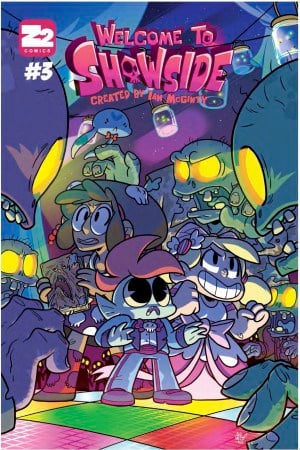 Welcome to Showside #3 supposedly takes a break from fighting the monsters beyond the portal for a school dance. However, this being Showside, Kit, Belle, Moon, Teenomicon, and possible breakout character Boo do get to kick zombie butt between the mix of awkwardness, partying, goofiness, and romantic tension that is every high school dance. Writer/artist Ian McGinty also gives readers their first glimpse at the Shadow King in the present day and get to see him tell off his employees and just be sassy. His plan is a tiny bit ingenious even though his minions and middle management aren’t super strong. We also get to see Kit feeling a little bit down after the constant fights against monsters he is unknowingly connected to. He’s usually an upbeat guy, who can really pull off a tux, but McGinty shows the sadness

The art and humorous repartee continue to be the best part of Welcome to Showside #3. McGinty uses deeper lines and thicker inks to set Shadow King apart from his more animation-influenced minions and opponents, like the pudgy, yet thrall of evil Mayor Mayer, who is like the dumber, second cousin of Mayor Richard Wilkins from Buffy the Vampire Slayer. He also uses characters’ eye and brow movement to show emotions while still keeping the fun, cute designs, like when Kit furrows his brows when he feels stressed about the Nexus. But there’s room for silliness, like Kit doing the Showside equivalent of “dabbing” at the school dance. It’s kind of become a cliche that zombies are overdone, but McGinty has fun with them and gives the undead, who can’t be made dead again like in most zombie fiction, a disgusting meets adorable look with rotting teeth and teenag dialogue. And the undead aren’t all bad as Kit tries to be friendly and chat with a dead cheerleader girl. Hopefully, they hit it off in future issues. 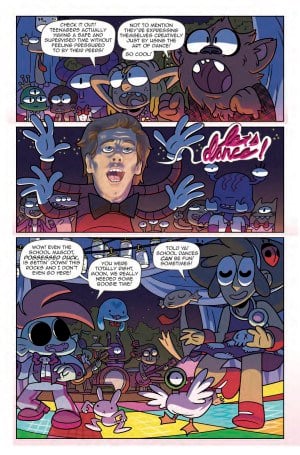 group when it comes to fighting evil. (Sorry about all the Buffy the Vampire Slayer references, folks.) Kit is the chosen with the dark backstory, but doesn’t brood all day and likes to dance, play video games, and is obsessed with food. Seriously, his first line of dialogue is about being hungry. Moon is the mage and strategist of the group, who keeps everyone on track in dangerous situations as well as knows when it’s time to have some fun. She is also there to roll her eyes at everyone’s bad jokes. Seriously, she has some crazy expressive eyes. And Belle is a pure spitfire in battle and loves making quips even if they’re non-stop fish puns in this instance. Finally, Teenomicon and Boo really make their mark in this issue with a one, two punch of dry teen angst and pure adorableness. But they aren’t just there for comic relief and actually end up being important to both immediate and long term plot. Three issues in, and Ian McGinty has crafted a main cast of characters with complementary abilities. It is fun to watch them take down monsters together or just laugh and joke around. There is real substance beneath their stylish, put them on Cartoon Network already designs.

And Welcome to Showside #3 goes above and beyond the call of awesomeness by having not one, but five backup stories as McGinty lets great creators, like Kate Leth (Hellcat), Katy Farinas (Amazing World of Gumball), and Fred Stresing (Munchkin) tell their own fun and hilarious stories in the world of Showside. Leth writes and draws the first backup featuring the Showside crew in all kind of adorable costumes from pirates to magical girls and channels the cuteness, yet competence that she brought to Catbug in Bravest Warriors (and chibi Hellcat in Hellcat currently) in Welcome to Showside‘s Boo.

Speaking of Boo, Fred Stresing writes and Katy Farinas draw a hella cute story featuring him imagining what his life would be with a new pair of pants. It’s two full pages of colorful pop culture parodies. Stresing also writes a backup drawn by Meg Casey starring Baked Beans, the designated Greek chorus/exposition man of Welcome to Showside, as he makes a documentary film about the town along with an 8-bit Kit story stuffed with video game references drawn by Michael Knepprath. He caps things off with a one-pager that he draws himself featuring a different take on the Shadow King and his realm.

Welcome to Showside #3 has some cool monster designs and energetic storytelling from writer/artist Ian McGinty along with an ensemble cast of characters that you want to hang out with. There’s also some fourth wall breaking, but McGinty exercises restraint in these jokes unlike a certain creator on a character, who’s getting a movie in February and rhymes with “bed drool”. Plus there’s more Shadow King in this issue, the overall arc of Welcome to Showside starts to unfold, and the backups show the sheer storytelling potential of this amazing world inspired by Adventure Time, H.P. Lovecraft, Mike Mignola, Southern beach towns, and RPGs and classic video games all rolled into a tasty burrito that wouldn’t be out of place at Beef N’ Dog.

Welcome to Showside #3 is worth picking up just for Kit’s fabulous blue tuxedo and skull bowtie combo.