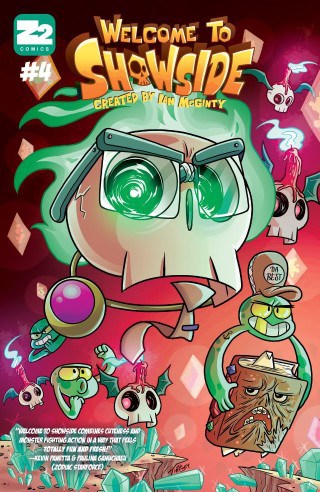 Welcome to Showside #4 starts to ramp up for its endgame as Frank the Demon aka the Nexus’ most disgruntled employee does a little Mutiny on the Bounty meets Office Space (But with more skulls.) and decides to break the chain of command and take Showside for himself with his trucker hat wearing henchman, Climp. And along the way, writer/artist Ian McGinty and co-writer Samantha Knapp poke fun at online dating, mid-2000s bands whose albums were sold at Hot Topic, and even beloved fantasy properties. This is while putting Kit, Moon, Belle, and Boo in some real danger to go with its cliffhanger ending. In the first three issues, it seems like the main characters have lucked or breezed their way through fighting , but Frank the Demon is a real challenge for them even though his disguises suck.

In Welcome to Showside #4, McGinty and colorists Meg Casey and Fred Stresing  takes some time to switch things up visually, like when Frank the Demon starts to put most of the inhabitants of Showside under his mind control. McGinty uses more jagged lines (like he does for Frank’s reactions and movements) on these characters while giving them silly hypnosis glasses that you used to be able to find in a Cracker Jack box before their prizes went from physical to digital. The dark red background colors from Casey and Stresing add to the feeling of hell on Earth as the issue draws to its close. But McGinty changes his art style for comedy purposes too, like the hilarious magical equivalent of speed dating (Or those pair an artist with a writer events that sometimes go on after cons.) where the hapless witches, mages, and neurotic not-hobbits try to team up with someone to teach them in the sorcerous arts and are drawn like Munchkin characters. It’s a nice moment of humor before the events of the story turn dark for our young heroes. 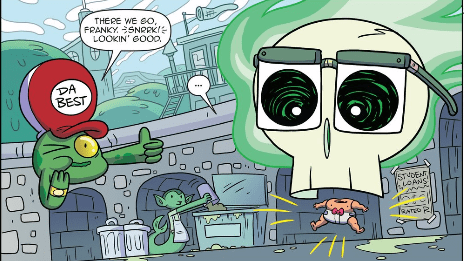 It’s really a delight to see Frank the Demon work his villainous ways with his swirling green hypnotic eyes and wink-at-the readers villainous monologues. He thinks he’s hot stuff, but luckily, Climp is there to bring him down a peg every now and then like reminding him that he’s on the clock for roughly 10,000+ more years and laughing at his baby disguise. McGinty and Knapp find the right sweet spot between making him a joke and actually threatening, and it’s not until it’s too late that both the reader and Kit and his friends realize that this floating green eyed skull might be the real deal as an unexpected character joins his side and gets an insane character design and lettering makeover that is definitely worth a nice, big panel. The issue began with Kit slacking off and generally playing video games and Bechdel Boy comics in one of many great background art gags from McGinty (I would totally be friends with him.), but next time, he won’t be so carefree. But letting readers spend some time seeing the characters hang out and joke around definitely creates an emotional connection with him once they’re thrown into actual peril. Plus there is always the background theme of Kit, Moon, and Belle living up to their parents’ legacies as evil ruler, skilled witch, and famous demon hunters respectively, which McGinty and Knapp show in this issue as Moon struggles with her magical abilities and using Teenomicon as a safety blanket when her grandmother was already “off-book” at this time of her career.

The backup story in Welcome to Showside #4 by Meg Casey (Munckin) and Maddie Gonzalez (Munchkin) features the ever adorable Boo  and is a parody of the old Charles Atlas ads that used to be in comic books back in the day as well as the whole “getting swole” craze in general as he trains with the uber douche, Chad Chaddington. There is a fun 80s training montage in the middle of the story, and ripped Boo is so gross that it’s hilarious. But, at the end of the day, Kit helps Boo remember to be his cute, non-bullying, juice box drinking self and relax with some video games. Gonzalez does a solid job helping Boo emote with intense or silly facial expressions like when he sweats hard while attempting to lift a one pound weight. He’s truly a fun character, and it’s nice to see him get panel time in both the main and backup story.

Welcome to Showside #4 continues to be both hilarious and suspenseful as Ian McGinty and Samantha Knapp make fun of Tinder and the emotional power of Gerard Way’s old band on tiny blue creatures while giving Kit and his friends a villain that is both powerful, entertaining, and certainly not monosyllabic in Frank. (Be sure to read his parts in your best Henry Rollins voice.)