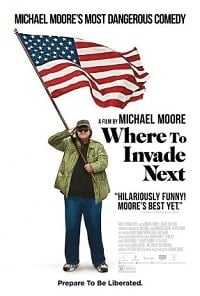 Where to Invade Next
Directed by Michael Moore
USA, 2015

Michael Moore literally declares war at the open of Where to Invade Next; it’s no longer hyperbole to say that he “targets” a certain topic or interest. Here he boards an aircraft carrier with a booming score befitting a Michael Bay title while he brandishes an American flag over his shoulder. He holds court in front of a table of Pentagon officials who in his dream confess to him they have “no idea what the fuck we’re doing” and anoint Moore an American hero.

Thank goodness we have Michael Moore fighting the good fight! Moore’s presence and ego in his films has gone from the in-your-face honesty of Roger & Me to the confrontational approach of Capitalism: A Love Story. His politics were in the right place but he became a parody of himself. The opening of Where to Invade Next positions him as a bellwether of ideology, immediately taunting all who revile him, regardless of their political leanings.

And yet the title Where to Invade Next is already a red herring; an uneven framing device for what is, in fact, the most optimistic film of his career. Moore’s “invasions” do not envision him staging wars in other countries, but claiming European ideas and culture to apply back home. You can already hear chants of, “If you don’t like ‘Merica, then you can git out!” But Where to Invade Next is a movie designed specifically to illuminate Americans about the successful approaches taken by countries such as Italy, France and Norway when tackling matters of education, workers’ and women’s rights, healthcare, substance abuse, and even school lunches. Moore proves that even in the Internet age, there is a serious culture divide where Americans are shocked and dumbfounded to see how happily the other half lives, and how commonplace these institutions are around the globe.

Moore’s tone makes all the difference in Where to Invade Next. Seeing how green the grass is on the other side of the fence is amusing, surprising, and at times hilarious. We get a laugh out of a little French girl trying Coca-Cola for the first time. Moore displays sheer amazement when, in a Norwegian prison, he’s talking to a convicted murderer, complete with threatening face tattoo, and behind him sits a rack of kitchen knives ripe for the taking. All of these positive advancements are well within the reach of American institutions, and Moore gets that point across through levity, not lecturing.

Here’s one for starters: women in Italy get five months of mandatory maternity leave. People get paid leave for honeymoons, plenty of vacation time, and two leisurely hours for hearty Italian lunches. The CEOs believe this to be perfectly normal and beneficial for happy, productive employees. One CEO plainly states, “There is no clash between the profit of the company and the benefit of the people.”

Naturally, these European countries have their share of problems, but Moore prefaces the film by announcing his intention to pick flowers, not weeds. It’s about the most positive and surprising thing Moore has ever uttered in his documentaries, and it’s amazing how much entertainment he extracts form remaining so optimistic and chipper. Where to Invade Next even marks the first time Moore has been graciously welcomed by prestigious CEOs to companies like Ducati and Mercedes-Benz, not to mention major heads of state like the President of Slovakia (whoops, Slovenia).

Sometimes Moore’s thesis amounts to, “See how much better they have it?” which makes Where to Invade Next hilariously uneven at times. “Now why can’t I have more time for casual vacation sex?” Sometimes he seems pandering, talking to CEOs as though, off camera, they’re really hand-wringing, Mr. Burns-level evil on par with the American stereotype of all bankers, billionaires, and politicians. One of his most problematic and unsubstantiated observations is suggesting the War on Drugs was an attempt to imprison African Americans and take away their voting rights, effectively reintroducing slavery to the 20th Century.

But what stands out more than the cynicism is Moore’s fascination with how people in other countries not only expect, but demand these institutions. The examples are almost endless. France provides incredible cafeteria lunches for their kids, and Finland produces the smartest kids in the world despite abolishing homework and standardized test scores. Portugal hasn’t prosecuted anyone for drug use in 15 years, while in Norway, expanded creative freedoms, even to convicted murders, contribute to one of lowest recidivism rates in the world.

All of these are amazing examples of cultural progress and the goodness of people at work. It would be easy to cherry-pick all of Italy or France’s other problems, but Moore isn’t advocating that we become any one of these European nations. He’s offering creative options on the home front, though he’s quick to point out that Americans have made plenty of strides already.

Where to Invade Next may spell out its ideas using the infamous opening tirade to The Newsroom, but it plays as a hopeful appeal to human dignity. The old joke states that, “In Heaven, all the cooks are French, the mechanics are British, the lovers are Italian, and everything’s run by the Swiss. In Hell, the mechanics are French, the cooks are British, the lovers and Swiss, and everything’s run by the Italians.” These are, perhaps, harmless globetrotting stereotypes, but Where to Invade Next claims the best parts of these cultures to help America become the Heaven of that joke.