The BioShock franchise is one of the most beloved in the modern era of gaming, being a model for storytelling and world-building to developers and creators across the industry. With the rumored existence of a BioShock collection for the Xbox One and PS4, I struggled to finally come up with my top ten favorite moments from the franchise. Would you kindly spend a moment of your time and take a look? 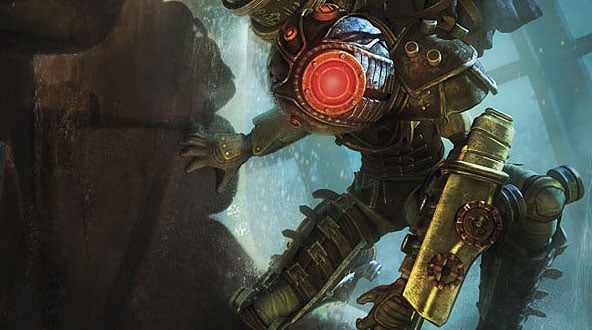 After the events of BioShock and the implications of the “good” ending, I at least thought that while the horrors surrounding the Little Sisters were not over, nothing worse would happen to them. Enter the Big Sisters. These nightmares are Little Sisters who have gone through puberty, and become increasingly unstable and confrontational in their extended time in Rapture. The conditioning developed by Suchong that once made them view Rapture as a heaven under the sea had an adverse effect as they grew, making them insane and incredibly aggressive. They work to protect the Little Sisters at all costs, with bodies that have adjusted to the ADAM created within their bodies as children. While there are certainly more well-known and powerful moments in BioShock and BioShock Infinite, these twisted young girls create an additional layer of darkness in BioShock 2’s Rapture.

9. BioShock 2 – Playing as a Little Sister 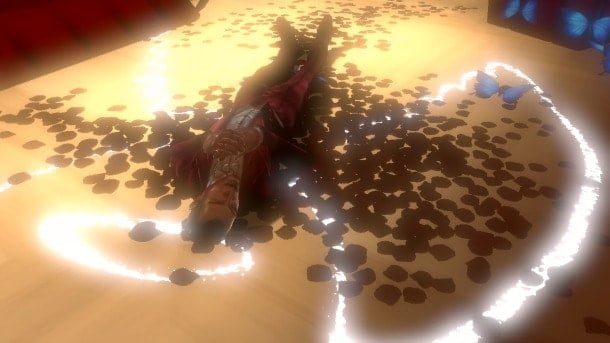 This was the moment that we were all waiting for, and maybe dreading. Since the introduction of the first Little Sister, players were waiting for the opportunity to see the underwater world from their eyes. Although saying that BioShock 2 is your favorite title in the franchise is a generally unpopular opinion, this was one of the most beloved experiences when it was introduced to players. I loved running through the world and feeling that vulnerability of being a small child and seeing Rapture from a different way, but it was also sickening as I was sticking corpses with my needle and extracting their ADAM. These conflicted emotions are a theme of mine as I play the Bioshock franchise, and they were incredibly strong in this moment of the second installment. 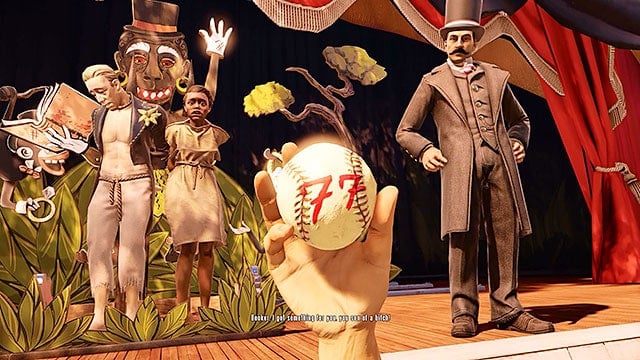 This was the moment that set the tone for what BioShock Infinite was going to be: a story about a corrupt and rotten populace lying under a mask of American exceptionalism. The Raffle is a true test of character. As winner of the big event, Booker is asked to stone an interracial couple, a forbidden union in Columbia. As I realized that the characters were serious in their offer during my first playthrough, I immediately felt like I had had all the Adam taken from me by a thousand Little Sisters. Although it was uncomfortable, I still remember that moment years later, and that is a mark of how significant this moment was. 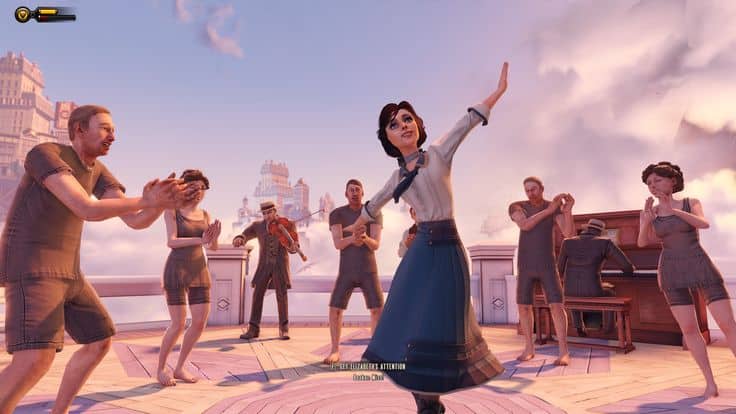 In a city as crooked as the mask upon a splicer’s face, finding moments of just pure fun can seem impossible. However, early in BioShock Infinite, there is reason to smile: Elizabeth experiencing her world for the first time in ages. Her carefree, child-like nature is the perfect foil to the darkness that surrounds Booker, and her personality here is a stark contrast to the Elizabeth that emerges later in the story. Her transformation speaks to the destructive power of society in Columbia, making the dangers of that world all the more real to us as players. If a soul as pure as Elizabeth’s could be affected so deeply by this world, what would that mean to the rest of us? And should we be more aware of how society affects us in the real world, even in small ways? This is the power of the BioShock franchise, that a small moment like a young woman dancing could raise so many questions.

6. BioShock Infinite – Will The Circle Be Unbroken? 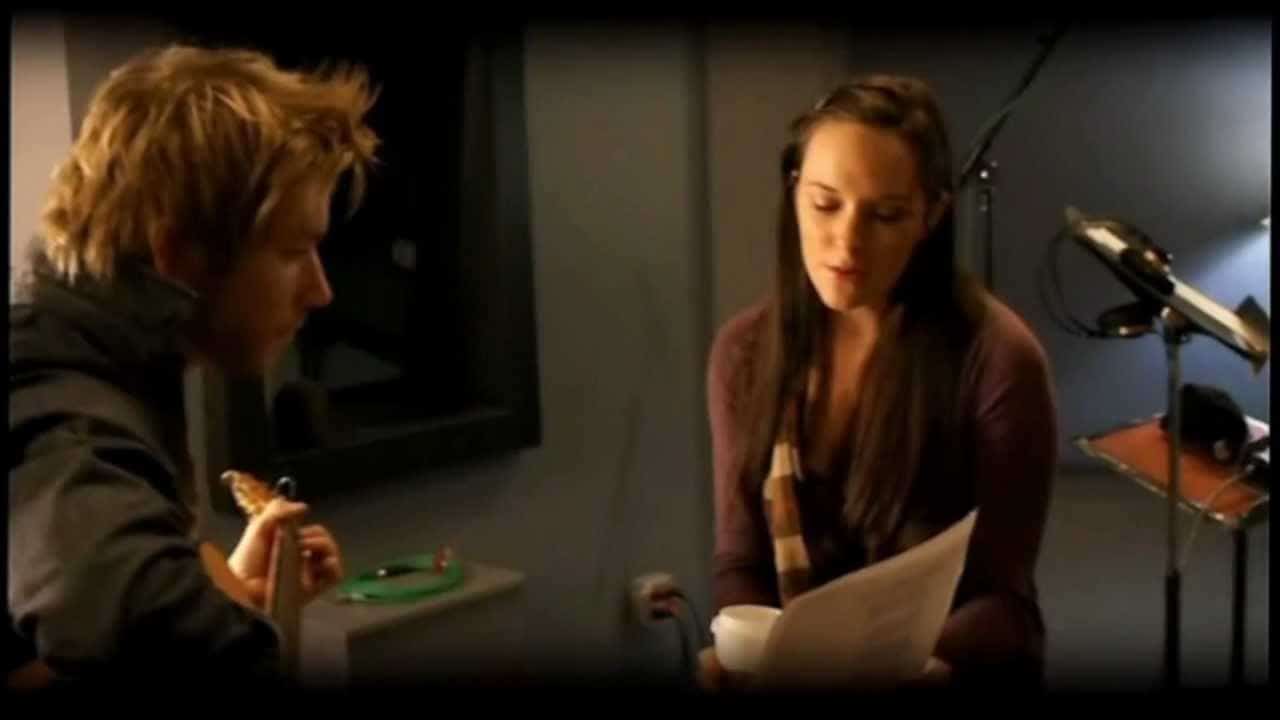 While many people would call on the early performance of “God Only Knows” as the intense musical moment of BioShock Infinite, the later, quieter duet between Elizabeth and Booker was much more impactful on my gaming experience. Even though Elizabeth (voiced by Courtnee Draper) only sings one chorus of the song in-game to the playing by Booker (voiced by Troy Baker), the lyrics relate so much to the story of the game, the American exceptionalism that was embodied in the spirit of Columbia, and what could have been. Although only seconds long, it was a perfect moment to just stop and reflect on all of the game’s events, all of Comstock’s cruelty, and dream of a better world: for Booker, for Elizabeth, for all. 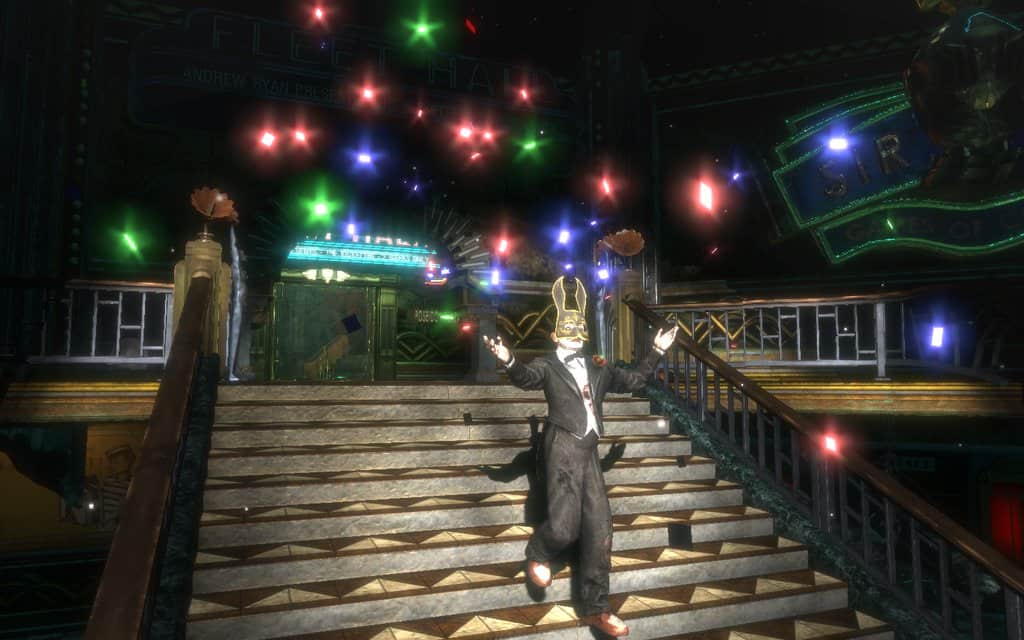 It’s hard to find a villain in a video game that left a mark quite like the one Sander Cohen stamped onto my heart. While his compositions were indeed the work of a genius, it quickly becomes clear that they came from the mind of an evil genius. As you are forced to go on a journey of killer photography to fuel his inspiration, you begin to really get a view into how remarkably tortured Rapture has become, and how far away from its ideals it truly journeyed. It’s not all a drag, though. Cohen does have an element of dark comedy that almost makes him likable. Almost. 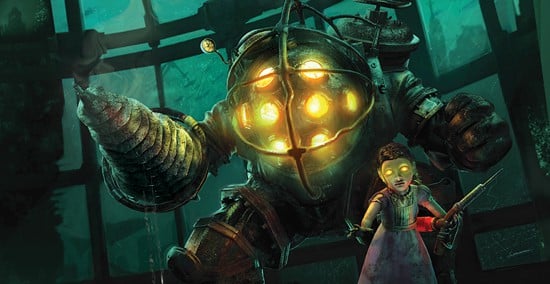 There’s nobody in a father’s life that can quite compare to his little girl. In Rapture, this bond is arguably the strongest one around, with the remarkable link between a Big Daddy and his Little Sister. Created by Dr. Yi Suchong to perform maintenance on the city itself, Big Daddies were eventually transformed and reprogrammed to act as protectors of the Little Sisters. Although we all felt the need as players to defeat these hulking powerhouses for their resources as well as to reach the Little Sister they shielded, there was still a part of me that hated taking them down. Every time that their Little Sister cried out for her “Mr. Bubbles” and cried over the broken body of her friend, I felt a touch of sadness, even though I knew I could save her. These tiny emotional changes were moments that made my BioShock one-of-a-kind, and these were just a few that brought me back to the reality of the twisted world that I was traveling in. 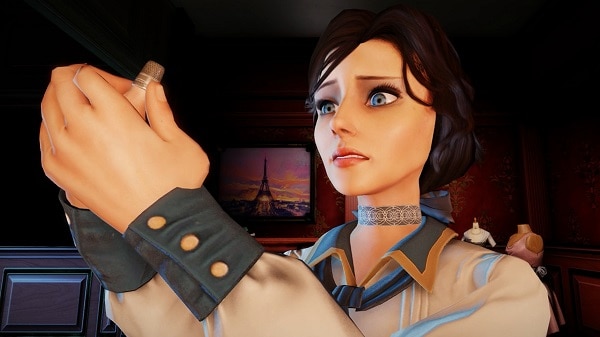 Throughout BioShock Infinite’s events, the question of why Elizabeth, Lamb of Columbia and Seed of the Prophet, would have a missing fingertip kept coming up. When it was finally revealed that she was truly Anna DeWitt and had lost her finger in a tear after Booker gave her to Robert Lutece in order to pay off gambling debt, I was speechless. Elizabeth’s power came from the simple fact that she was torn in two from the experience, existing in two separate dimensions. This only leads to more revelations, including that Booker and Comstock are the same man in different realities: one accepting the baptism at Wounded Knee and one rejecting it. The ending of this game left everyone with jaws dropped, and continues to be one of the most incredible feats in storytelling that I’ve ever seen in a game.

2. BioShock – Would You Kindly? 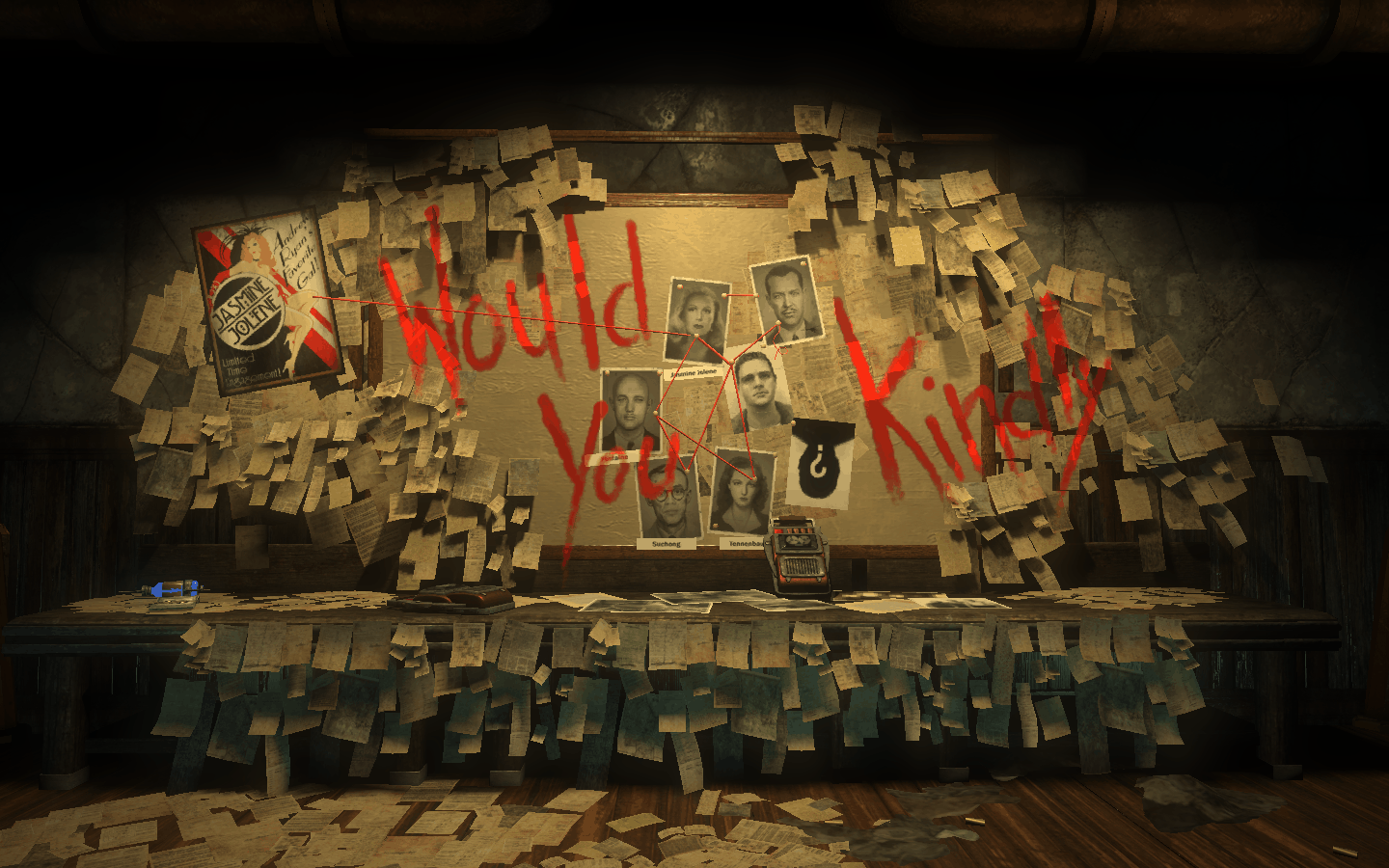 This was one of those iconic moments in a video game where you forget that you’ve been playing a video game and you just recognize the brilliance of the story and the universe that you’ve been roaming. With those three words, Andrew Ryan turns everything that you thought you knew on its head, breaking every notion that you had about your own free will. By making this plot point one where the player has no control and is forced to kill Andrew Ryan, this moment is made all the more powerful. You’ve been stripped of your physical control, along with every thought that you had surrounding your own identity. This climax was what truly solidified BioShock as one of my all-time favorite experiences. 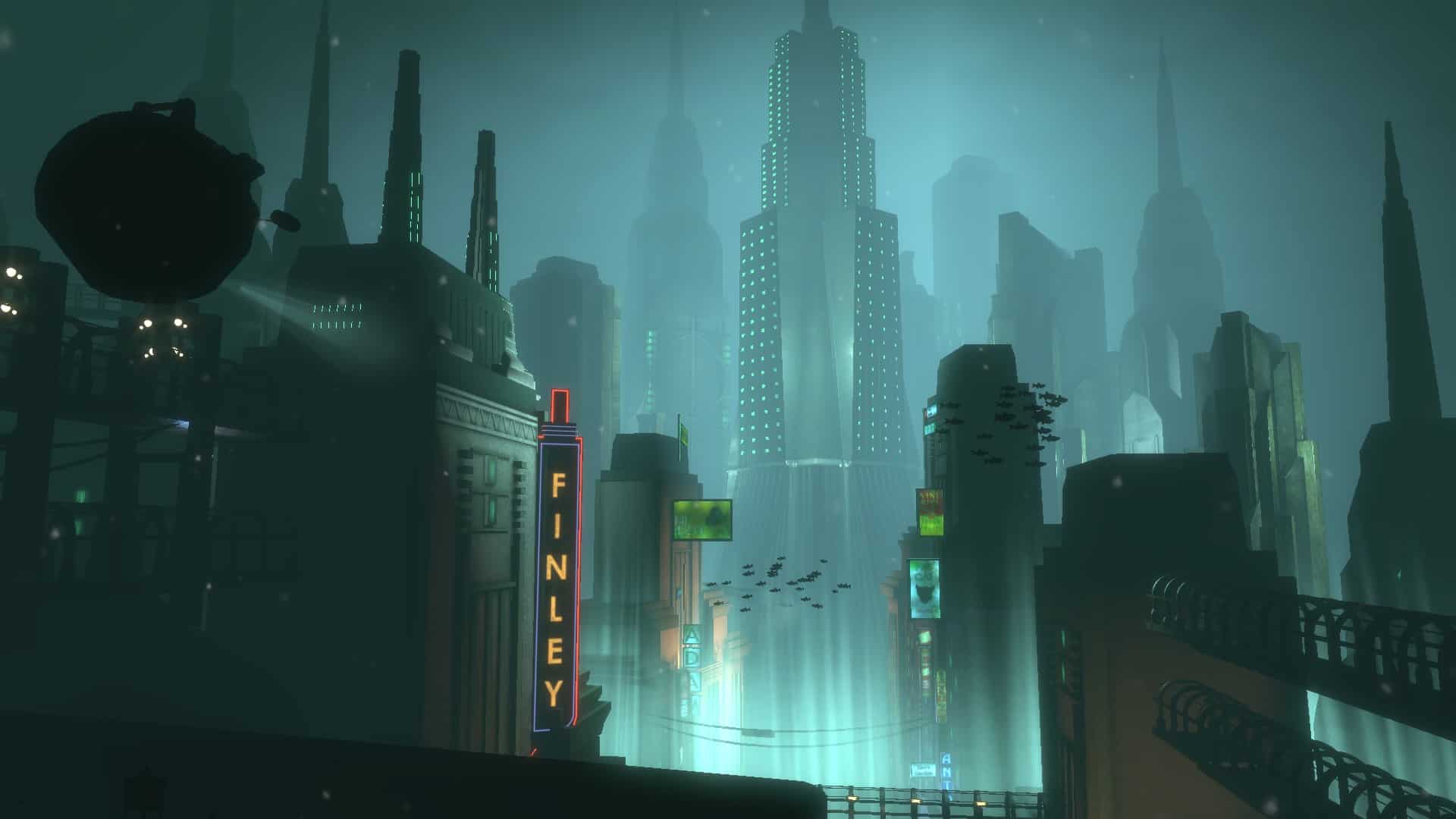 Finding a moment more iconic than our first view of Rapture is an impossible task. Nobody knew what to expect when we entered the world of BioShock, and I don’t know that anything could have prepared us. The beauty of Andrew Ryan’s life’s work is undeniable, from the architecture to the simple background of the ocean ecosystems surrounding it. The breathtaking nature of this introduction is beautiful in its ingenuity, as it does nothing to give us any hints of the horrific underbelly of the once-utopia. The farther that we travel into Ryan’s creation, the more we wish that we could return to that first moment, before we found out the truth of the pain that lies within that stunning cityscape.

Were these your favorite BioShock moments? Let me know yours below!