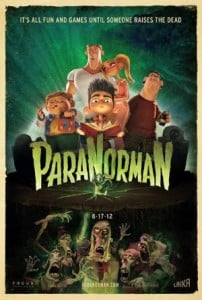 For Laika, the animation studio that began its fledgling career with 2009’s lovely and perceptive stop-motion film Coraline, the bar was raised high for its sophomore effort. After Henry Selick impressed audiences with his adaptation of Neil Gaiman’s story, Laika’s next film would receive, perhaps, undue expectations. Though it’s a bit of a sophomore slump, their follow-up, ParaNorman, is a slickly entertaining and somewhat unexpected story that once again caters to more mature children. Its script isn’t tightly focused, but the film is still a fun romp. Norman Babcock (voiced by Kodi Smit-McPhee) is a strange little boy living in the small New England town of Blithe Hollow. Everyone, including his bewildered parents (Jeff Garlin and Leslie Mann) and self-obsessed older sister (Anna Kendrick), agrees that he’s an odd child and for good reason: Norman can see dead people. He’s at the point in his life where he’s accepted this unique gift even if others bully him constantly. One day, Norman is warned by a local nutter (John Goodman) that only he can lift the mysterious witch’s curse that has plagued the town for three centuries; if he doesn’t, the dead will rise from the grave and incite mass terror and chaos. Norman joins forces with a few other kids to take down the zombie- and witch-related threat, as the adults in town turn quickly into an angry mob.

Like Coraline, ParaNorman may best be appreciated by older kids. Even more so than in Selick’s film, the tone is more adult, what with the undead terrorizing the living and some casually adult humor. (The payoff to one of the subplots, in the last few minutes, is both unexpected and laugh-out-loud funny.) And directors Sam Fell and Chris Butler do a decent job of building tension in some early sequences once a group of seven zombies—supposedly the seven people who decreed that the witch from that curse should hang until dead—are woken from their long slumber, attacking Norman and his motley crew. It’s not nearly as gruesome or gory as a standard-issue zombie picture, but ParaNorman could legitimately creep some kids out. Fell and Butler don’t employ a kind of in-your-face intensity; the horrors onscreen are presented very matter-of-factly. Where ParaNorman stumbles—and just a bit—is in its script. Norman’s father, particularly, goes out of his way to splutter in fury about his son’s inexplicable quirks. Early on, he says some unfeeling and nasty things. You’d expect that a major conflict within the story would be Norman proving to his father that he’s just as worthy of love as a normal, non-ghost-seeing child, and that his father would realize the error of his ways. That may seem like a pat or rote way to resolve a subplot, but there’s no resolution at all to this conflict in ParaNorman. The fractious relationship doesn’t go completely ignored, but it’s as if Butler (who wrote the script) either forgot by the end that it existed or just didn’t care to follow through. Seeing as the third act of the film is otherwise surprisingly moving and refreshingly honest, this dangling thread is all the more frustrating.

At the very least, the directors and Laika were wise to—as happened with Coraline—avoid casting famous people just to have famous people in an animated movie, stop-motion or otherwise. Smit-McPhee is a decent lead, but the standouts are Kendrick, Casey Affleck, as the brawny brother of Norman’s sole friend, and Christopher Mintz-Plasse, as Norman’s chief tormentor-turned-ally. All three, via voice work, play against type but do so naturally, never sounding out of touch with their characters.

ParaNorman, like most animated films released in the last few years, is being presented in 3D. Any fan of Coraline will remember that its use of 3D never felt unnecessary or distracting, but immersive. As such, it may be a letdown to find out that ParaNorman’s 3D is completely pointless. As so often happens with 3D releases these days, you may find yourself being able to see the image easier by taking off the 3D glasses, at least during scenes that employ a lot of close-ups. There’s a stark contrast between the color you see through those glasses versus what it looks like without them on; here, more than in other films, the image looks too washed-out and colorless. Stick to 2D if you can.

ParaNorman is worth seeing, too. It fits in nicely with fast-paced adventures from the last 30 years of modern cinema, as we watch a gang of unlikely misfit kids ward off a mysterious supernatural threat. This film may scare younger kids; being scared, though, isn’t always a bad thing. What ParaNorman gets right is that it doesn’t wallow in frightening its audience. Instead, it makes those scares equally thrilling and exciting. Getting scared is natural, but being brave in the face of fear is what defines us. At its best, ParaNorman aims to remind its audience of this important truth.