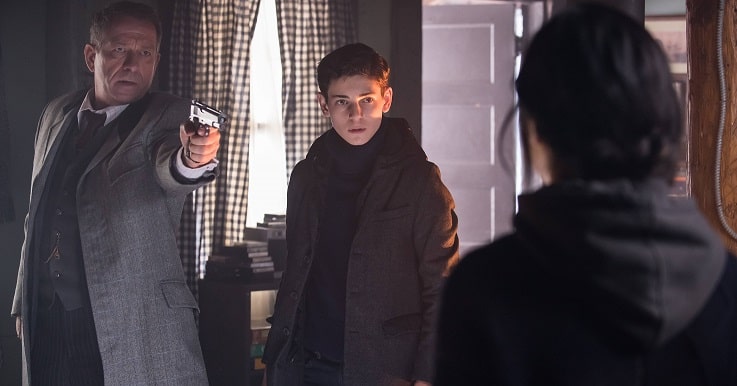 After Bruce discovered that his father, Thomas Wayne, had a secret computer at the beginning of the season, it’s been a waiting game of when will that payoff. It finally does on this week’s episode of Gotham as the information learned on the computer files takes Bruce and company on a field expedition to find out more about Professor Hugo Strange and his unusual experimentation background under employment at Wayne Industries, which appears to be neatly tied into the mystery of who initiated the Wayne murders.

Gotham reveals that Thomas Wayne founded a bio-engineering facility called “Pinewood Farms” where Professor Strange pioneered outlandish experiments on it’s resident patients. Although the results of these experiments are almost cartoonish level implementations, such as a surgically installed raptor-esque hand, Gotham manages to stay grounded in its reality by not undermining the horror of such experiments. The gore utilized on the series are always done seriously, which is what keeps the show from being too silly when it delves into its campier ideas, this is how the show hits its desired tone of darkly comic rather than being corny to the extreme of something like Joel’s Schumacher’s take in Batman and Robin.

Since the introduction of Professor Hugo Strange, we’ve been waiting to see him put some of his new experiments into action and we do finally do get to seem some of that in “Pinewood” with him sending out Mr. Freeze to exterminate the former test subject, and in the success of the resurrection program with Patient 44, who is revealed to be the reborn Galavan. Although, Mr. Freeze’s time out is minimal in the episode, and we don’t get a full understanding of how much he’s changed from when we’ve seen him earlier (other than just being given lip service that he’s become really angry), the moments we do get of him in action is done extremely well and it only makes for the audience to crave more onscreen time with him, which hopefully we will get soon.

“Pinewood” does a great job at setting up Gordon, Bruce and company to go up against the threat of Hugo Strange, it also presents a great upcoming obstacle within its final moments. The second season of Gotham has been really delivering with its impressive use of villains and it appears that there is still more to come before the season ends. 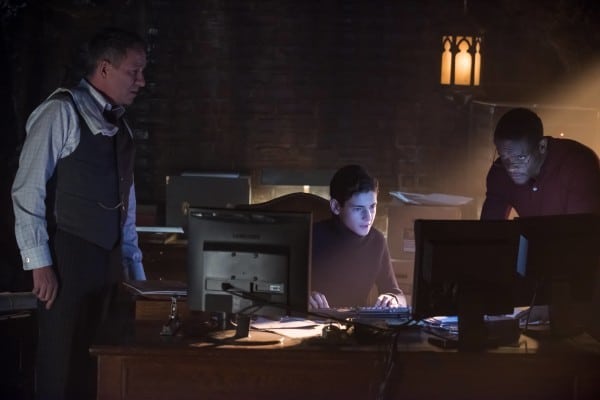 Bruce’s arc has detoured from his mission about finding out who murdered his parents in recent episodes and it’s not been as fulfilling as one would’ve hoped because all we really got to see is a few snippets of the Bruce and Cat adventures before the series returned to Bruce uncovering the mystery of his parents murder. Luckily, the return to the case is given much momentum by having Bruce and company learn that the threat they face is Professor Hugo Strange bringing all of the threads together for a showdown between the two. The anger that David Mazzouz displays at the end of the episode speaks volumes of Bruce’s mental state, as he may be heading back towards seeking vengeance against Professor Strange. Seeking justice has always been the ultimate goal for Batman as a character, but the thing is he will never be satisfied because it’s his parent’s death that fuels him. It appears that what will drive Bruce in the comic books won’t necessarily be what pushes Bruce on Gotham, which could be interesting to see depending on how they handle his story. Will we see Bruce find closure on his parent’s death or will there be another twist that we just couldn’t possibly see coming? Here’s hoping for the latter.

After her release from Arkham hospital, Barbara, much like The Penguin, found herself looking for a place where her newly rehabilitated self could flourish and be a that better person. Her first order of business is to seek forgiveness from the one man she’d wronged the most and that’s Gordon. Although she does seem on the up and up, her past continues to follow her around as Gordon cannot give her what she wants. Barbara then goes down the same path as Penguin, which is a path that seems certain to lead her back to her villainous ways as she finds herself now living with Tabitha and Butch. This journey for Barbara is perhaps best with her going this way because she’s always more fun as the bad girl finding her bliss in madness than she is as a mopey wannabe do-gooder. 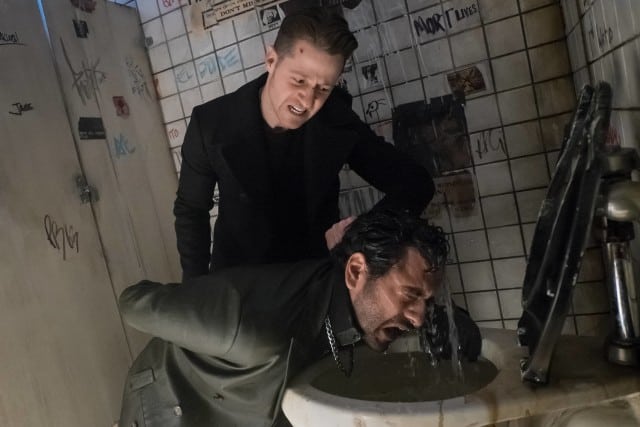 This week the investigation is two headed as Gordon follows a lead to learn who hired Matches Malone to commit the Wayne Murders, while Bruce tries to uncover more about Thomas Wayne’s involvement in Pinewood Farms. Gordon’s tactics this week regresses to the more brutish ways as Gordon has quit the GCPD so as to work outside of the law system. Although, this is not an uncommon turn for Gordon who often feels the need to go rogue in order to find justice, what is interesting is that Gordon has an endgame in mind; which is to solve the Wayne murders case and then return to Lee. For this goal he’s decided that he needs to work outside of the law (a very Batman state of mind) in order to deliver on his promise. It’s not the best that Gordon is reverting to using brute force again in his investigations, it’s something that has lead him down the dark path that has been his downfall many times, but on Gotham sometimes it is fun just to watch him punch out some well-deserved hit-men for information.

For Bruce, his path leads to Pinewood Farms and a patient named Karen Jennings. Bruce’s tact on his investigation is less violent than Gordon’s, because he can see the perceived threat of Jennings for what she actually is; a victim. Bruce refuses to hold a gun on her and gains information through kindness rather than brute force. The dichotomy of both Bruce’s and Gordon’s journey is what makes Gotham so compelling and that’s always enhanced by the standout performance of both David Mazouz and Ben McKenzie, respectively. Karen Jennings is portrayed by Julia Taylor Ross and she is really good in her role of a coldly complex yet sympathetic character. The raptor hand implant is a bit campy, but it works here due mainly to Gotham having a precursor with Butch’s much sillier Mallet hand.

“Pinewood” is written by two Gotham regulars Robert Hull & Megan Mostyn-Brown, who have scripted mostly separately. The team up is well done as they are able to construct two very different starting points, Gordon’s and Bruce, and have them tie together cohesively. “Pinewood” appears to be an accumulation of season arcs and these stories surrounding around the Wayne murders fittingly coming together. “Pinewood” is directed by John Stephens, one of the series more notable writers. Stephens is successfully able to maintain the grim tone of Gotham while delivering several sequences that are both visually compelling and fun. Gotham is known for their Gordon beat up scenes and there’s no doubt that Stephens has been itching to put his mark on one and he gets to here. One of the absolute highlights of the episode is in the scene where Mr. Freeze murders Karen Jennings by using his ice gun and then smashing her. The entire sequence is very powerful and stunning in particular the scenes that display David Mazouz’s excellent performance of Bruce’s anguish and horror.

There is certainly more exciting things to come as the season begins to wind down into it’s final arc, but “Pinewood” offers some good backstory and pushes the story forward extremely well.