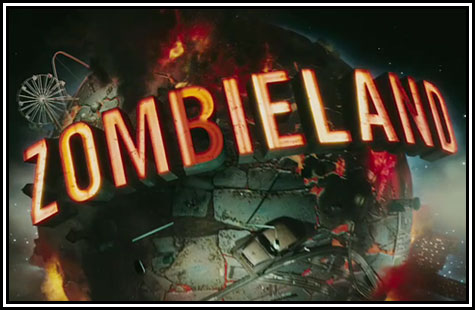 As a huge fan of Natural Born Killers and White Men Can’t Jump, I used to look forward to every Woody Harrelson movie. For awhile we were spoiled with excellent performances but in the past decade, I’ve been thoroughly disappointed with almost every role WH has signed up for. Well, believe it or not, you can only bash zombie brains for so long before it starts getting really old. Here’s proof.

Colombia Pictures and Ruben Fleischer, the rookie director at the helm of this picture, decided it was time to jump on the ‘Zombie comedy’ bandwagon and produce something that everyone has already seen before. Why? Because it’s a cash cow that’s damn profitable at the moment and at the same time, they figured they could ride Jesse Eisenberg’s (or should I call him Michael Cera V2?) coattails. This young lad, ironically, last appeared in Adventureland. See the similarity? It doesn’t stop there, but I’ll avoid wasting your time.

Sure, Eisenberg is funny from time to time, especially when he reacts to Harrelson’s rage issues, but his accelerated retorts and nervous composure eventually get on your nerves. Furthermore, he plays the role of narrator and thus we have to listen to him twice as much. His novelty, just like Cera’s, is quickly wearing off, and it would be time for him to start researching radically different roles if he wants to ensure a long and fruitful career. Next disappointment is #66 on Maxim’s Hot List of 2009, Emma Stone. Her waspy voice and enthusiastic use of mascara wasn’t going to salvage this mess, nor was Abigail Breslin’s performance; she seemed well out of place in her first “teenage” role. These two didn’t have nearly as much chemistry as Eisenberg and Harrelson did, yet, they were supposed to be sisters. A lot of the generic “we have to stick together” nonsense is included in a pathetic attempt to strike a sympathy chord with the audience, but it doesn’t stick as too often, as the dialogue veers wildly from comedic to dramatic. The writers’ indecisiveness and lack of confidence shines through and we have to take that into account when blaming our lead characters for such abysmal conversations. The worst part, though, was certainly when Eisenberg (as narrator) proudly exclaimed that Harrelson was “in the killing business, and business was good.” Hadn’t I heard that elsewhere this past summer? All in all, this is clearly a vehicle for Eisenberg’s continued rise to stardom. Expect a deceptively simple plot (two guys and two girls in a zombie world, making their way to an amusement park because it’s supposedly safe there), with one-dimensional characters and MTV-ready dialogue. Add to that about a hundred gratuitous references to pop culture because you know, it’s fun ridiculing Titanic, Anaconda and Miley Cyrus. The only highlight is a fantastic cameo by Bill Murray, but one that ultimately feels forced, kind of like Mike Tyson’s in The Hangover.

Should zombie movies be comedies or horrors? I’m on the fence, but one thing I do know is that they should bring something original to the table, unlike Zombieland.