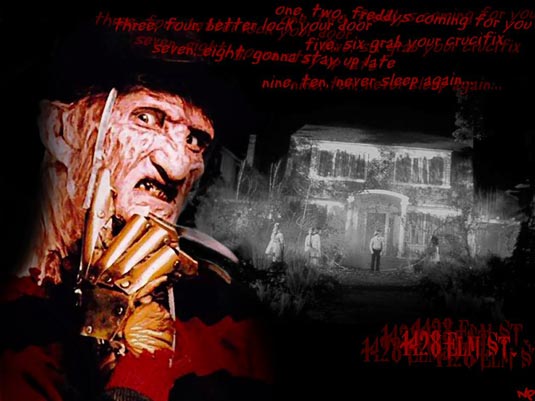 The new trailer for director Samuel Bayer and producer Michael Bay’s remake of A Nightmare on Elm Street left me thinking these guys think I’m an idiot. And while I have yet to see the movie, I hold out hope that they won’t turn another classic into a joke, steering the youth of today away from creepy, original storytelling towards the mire of generic, empty, in-it-for-the-money, crap.

Bayer’s credits include directing a bunch of videos, and although some of them are those of Iron Maiden and Metallica, that’s about the closest he’s come to directing horror. The trailer for the new Nightmare has the same feeling as Bay’s other remake projects, namely The Amityville Horror and Texas Chainsaw Massacre, both of which turned out to be desecrations of their originals… in my humble opinion.

Looks like one saving grace will be the role of Freddy Kruger played by Jackie Earle Haley whose character Rorschach in Watchmen was one of the best things about the movie. A veteran actor, his roles date back to Planet of the Apes (TV) and MacGyver. Hopefully his experience and talent will carry the film, which by the looks of the trailer seems like another horror-gone-bad teen consumer fest.

According to IMDB, one of Bay’s projects in development is The Birds, which I can only assume is a remake of the classic from genius/writer/director/actor/producer Alfred Hitchcock. God help us.