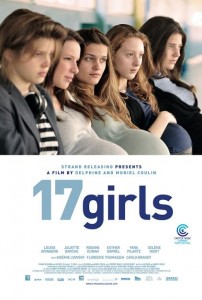 In an early season of Saturday Night Live, there was a great parody sketch of Saturday Night Fever, where one of the cast members uttered the following line: “Ah, to be young, stupid, and have no future at all!” It’s this hedonistic and foolish attitude that dominates the new film 17 Girls, about 17 teenagers in a seaside French town who all decide to get pregnant. Their decision isn’t fraught with tension, introspection, or doubt. Once they get knocked up, the girls look at it as a blessing, but not for the reasons you may think. As such, while writers/directors Delphine Coulin and Muriel Coulin attempt to create a perceptive and honest look at selfish young people, it’s awfully difficult to tolerate these kids’ actions, even for 90 minutes.

Camille (Louise Grinberg), a tall, willowy brunette who’s the alpha in her class, finds out at the beginning of 17 Girls that she’s 8 weeks pregnant. She’s a bit surprised, but not particularly concerned. In fact, she confidently tells her mother early on that maternity is the perfect next step for her life. She can right her parents’ wrongs, and being only 16 years older than her child will make her more aware of his or her needs, she says. Camille is so cocksure that she’s able to convince her close-knit and popular group of friends that being pregnant is exactly what they need, too. As inexplicable as this may be (the same goes for how quickly her friends accept this pact, without any thought of what the future would hold), the film is inspired by a true story from the United States, of a similar pregnancy pact. Seeing as the film takes place in the present day, and in a town where birth-control laws are more lax than they are in the United States, it’s immensely challenging to accept the blissful ignorance on display from these teenagers. Oh, sure, we expect teens to have a certain amount of inward, self-deluded thinking, so convinced that they’re all-knowing and all-powerful, and that the world revolves around them. However, there’s never a point in 17 Girls when the characters—save one girl, Florence, who’s exceedingly desperate to be accepted by the main clique—make rational decisions, or at least decisions that make sense within the story.

Camille has moments, flashes with her mother or the doting school nurse, where it feels like she’s willing to be honest. Every time you think she’s about to bare her soul, though, she backs away and raises her defenses even more. Her stubborn, obstinate nature translates to the other girls. It’s not even that these characters imagine having children would be like having a new fashion accessory; this isn’t akin to the voyeurism we may experience from watching an episode of Teen Mom. These girls just think their lives will automatically become better and simpler with a baby around. Aside from a rote sense of rebellion against elders, we don’t know where the girls get such an idea, that life’s simplicity is compounded by having a baby. Also, the girls’ awareness of what having a child is like seems remarkably dim; in one scene, we watch them and other students being shown a video of a woman delivering a baby in painful fashion. By this point, the school officials and parents are concerned by the epidemic of pregnant teens, so the girls laugh off the video as a scare tactic. Even then, however, they seem ignorant of what childbirth—both triumphant and terrifying—is truly like. The real flaw in the script is that the Coulins don’t show us the costs of the girls’ mutual choice. The characters are, you would think, setting themselves up for failure very quickly. However, we’d need to see them fail or struggle, see them be faced with the consequences of their actions. Instead, right when it’s time for those dominoes to fall on their heads, the end credits roll.

None of the performers are bad—the young actresses all feel immature and aimless enough to be believable teenagers, especially Grinberg. They’re adequate at playing appropriately opaque yet compelling characters. Are we, though, meant to see their choices as logical if flawed? Are we meant to decry them from the get-go? The Coulins are far too vague in their direction and writing. Ambiguity, of course, isn’t automatically a bad thing in filmmaking, but there has to be a point to its use in any story. As it stands, 17 Girls is a film with a compelling nugget at its core, but one that’s never developed into anything full or three-dimensional.