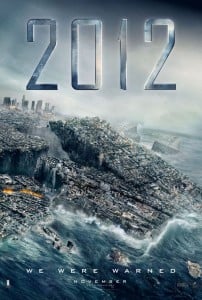 Tonight, Canadian viewers will have a chance to watch a two-minute, ‘cliffhanger’ scene from director Roland Emmerich’s upcoming disaster epic 2012. The scene will be broadcast between 22:50 and 23:00 on pretty much every channel we get up here, and its five-minute conclusion will be posted online.

I’m actually kind of curious about the film, which is based around a Mayan prediction that the world will be destroyed in 2012 by a series of CGI explosions and computer-animated tidal waves. The effects in the movie do look stunning, though I don’t put much stock into its premise, as I generally only buy into doomsday prophecies from cultures that have figured out how to work a wheel.