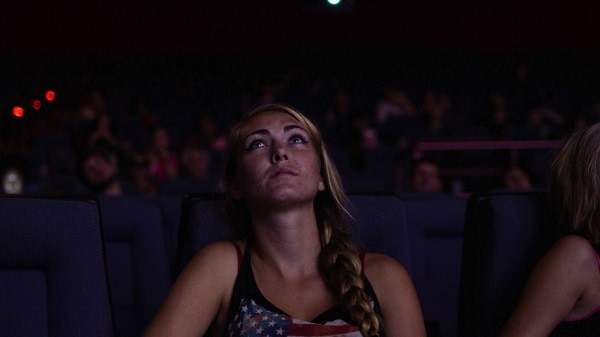 Watching Dark Night, an indie drama that tracks the mundane events leading up to a mass shooting, was a decidedly bizarre experience. Almost everything about the film was grating to me. From its lethargic pacing and self-indulgent camerawork, to its uninteresting characters and terrible soundtrack, the redeeming qualities of writer-director Tim Sutton’s film are difficult to highlight. I should have walked out. I wanted to walk out. And yet, there I sat for the entirety of what was, largely, a miserable experience.

In fact, an entire theater of industry professionals endured this 8:30 AM screening without a single person walking out. Just to put that in perspective, an evening screening of Guy Maddin’s brilliant The Forbidden Room saw a 50% walk-out rate at last year’s Sundance Film Festival. Why, then, did this theater full of busy and discriminating professionals (myself included) sit transfixed by a film completely bereft of entertainment value?

The answer, I believe, is twofold, and cuts right to the heart of why mass shootings persist.

The first reason boils down to human nature; we are fascinated by carnage, particularly carnage that happens to ‘other people.’ Where did it happen? How many people died? Who was the shooter? Why did he snap? Be it morbid curiosity, the re-assurance it didn’t involve our loved ones, or the desperate need for some predicative indicator, we simply can’t look away from the bloodshed. Despite the listless lead-up in Dark Night, there was the promise of a massacre at the end. In other words, our asses were staying in those seats.

The second reason, and the thing Dark Night captures perfectly, is how thoroughly we insulate ourselves from the outside world. So consumed are we by our personal melodramas that there’s little room for vigilance, let alone intervention. An individual’s motivation to act, be it socially, politically, or morally, is dampened and, eventually, rationalized into oblivion. It’s easy to blame political wrangling, mental illness, or gun control for all the senseless killing, but none of that excuses our personal culpability for not getting off the couch and taking action. Advocacy requires a level of involvement with the outside world that our personal bubbles simply can’t accommodate.

Dark Night understands this preoccupation with the mundane all too well. Writer-director Tim Sutton tracks several archetypes through their typical day. The tortured young artist (Aaron Purvis) indulges his therapist with diatribes about being misunderstood. A loner (Robert Jumper) prowls unnoticed through his neighborhood carrying a conspicuous automatic weapon. Teenage girls sunbathe after a hard day of shopping, while a narcissist primps and preens like she’s the star of her own reality show. It’s all pointless and boring and ridiculously fragile. These are the unexamined moments that consume our lives, even as danger lurks just around the corner. Sutton isn’t passing judgment or playing off their nonchalance for dramatic effect; he’s simply pointing the camera and watching.

For the film’s first half, we have no clue who will eventually pull the trigger. This portion of Dark Night (named after the film that is screening at the Cineplex where the massacre occurs) is an interminable slog. Truly, our lives are tedious beyond measure when observed from the outside. Once we finger the shooter, however, things finally kick into gear. Each scene is almost suffocated by tension. The sleep-inducing quiet of the film’s first half now puts you on edge, as you become a leering voyeur watching the birth of a killer. We brace ourselves for gunfire when we know he is near, and we cringe as he selects which ghoulish mask to wear during the assault. Even the soundtrack feels more forlorn and sympathetic. The end is near…

Though it largely fails as a piece of cinema, Dark Night succeeds as a sociological document. It’s a snapshot of our terrified, yet hopelessly self-absorbed culture. The authenticity of the film and its naturalistic performances (presumably delivered by non-actors) are certainly admirable, but even the minutiae of life needs to have a point when people are paying $20 to watch it. Still, it managed to keep a room full of jaded and hungover professionals glued to their seats. As the final scenes unraveled, I was reminded of the inescapable truth that we try so hard to ignore; there is no protection from a determined killer.