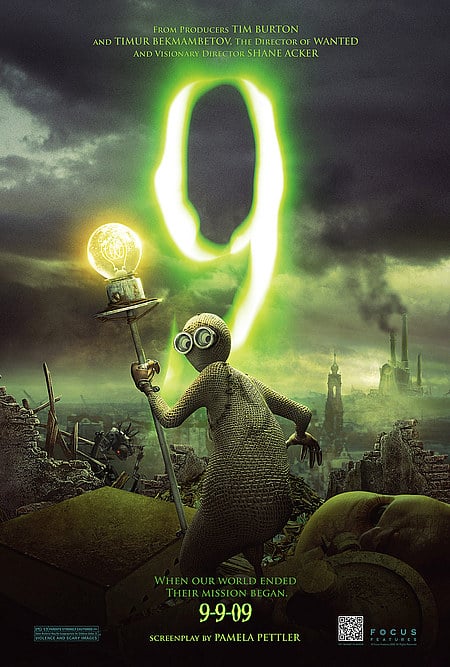 Shane Acker’s short film 9, upon which his new feature is based, is a lyrical, twisted, gorgeously conceived and shot dialogue-free 10 minute exercise.  The feature length film, still directed by Acker (now with a screenplay by Pamela Pettler to accompany his story) still embodies most of these qualities.  The color palate and textures of his post apocalyptic world drip with dusty browns, sickly reds and oranges, fluorescent greens, and the burlap sack look of nine little rag doll creatures left almost alone in this wasteland.

When 9 (voiced by the immediately recognizable Elijah Wood), a rag doll creature with a very real life inside him, wakes up to find his creator dead on the floor of a building, he sadly looks out the window to face a ruined world.  He knows he’s alive, but has no clue what the world is that he’s woken up to, what inhabits it or what occurred to leave it in such a state.  Very quickly, however, he meets another doll just like him – 2, voiced by Martin Landau.  They form an easy and quick bond as 2 gets 9’s voice working, and then both the action and the dialogue start.  And that’s the main difference between Acker’s short film and this new one: the feature has dialogue, whereas there was not a voice to be heard in the original short.  He should have kept it that way. The visual world of Acker’s feature is still painstakingly detailed, spooky, and arresting.  Once the creatures start talking, however, it switches into full-on Direct to Video Action Movie mode.  Hardly a line is uttered that isn’t some stock ”Get out of here! ” Or ”Go! Save yourself! ” Or ”It’s just something I have to do…alone. ” All of this isn’t helped by having 9 awake an ancient robot creature that wants…what?  Destruction?  Acker and Pettler then seemed more concerned with making a generic action movie (complete with a female doll, 7, who starts out bad-ass, and then quickly leans on 9 for support and help), than with exploring the intricate and complex world that we’re presented with in the opening minutes.

All this said, however, 9 is still well worth seeing. Acker could have relented to better scrutinize his universe than just close-up, shaky shots of his characters fighting a giant monster, but what he’s created is still marvelous, especially for those of us drawn to breathtaking visuals.  And when those scenes of fun and quiet, or melancholy and haunting beauty arrive, dialogue free, the whole film becomes worthwhile.