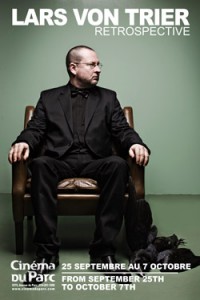 Lars von Trier may be a self-confessed depressive, but ‘schizophrenic’ is the epithet which first springs to mind when trying to describe his films. So luckily for me – not a big Lars von Trier fan per se – there seems to be no such thing as a typical Lars von Trier film: from the brutal emotionality of Breaking the Waves (1996) to the bemused distaste left by The Idiots (1998) to the “when-will-it-be-over” of Medea (1988), each von Trier film seems to elicit from the viewer (i.e. me) a radically different reaction. Even the trilogies, supposedly held loosely together by a unifying central character type, come in styles as varied as the Dogme 95-abiding, ultra-realist The Idiots and the highly stylized magic realism of Dancer in the Dark (2000).  It would thus seem an absurd enterprise to review the entiretyof von Trier’s oeuvre as a monolithic whole bearing a trademark von Trier stamp. Indeed, it is the sui generis unpredictability of each work that perhaps most saliently defines it, setting it apart as a product of von Trier’s quirky imagination.

Thinking that I was more or less familiar with the director’s range and the Dogme 95 movement in general, I set about watching The Five Obstructions (2003), a documentary-cum-remake of veteran Danish director Jorgen Leth’s experimental 1967 documentary The Perfect Human, not long after drowsily having endured Medea (drowsiness was partly my fault). And here I found myself gaping and wondering “Whatever is he doing here?”

The documentary revolves around the two directors’ ludic pact whereby Leth sets about remaking his mock-anthropological study The Perfect Human while abiding by rules imposed by von Trier – the obstructions of the title. Some of these obstructions are arbitrary, such as remaking the film in Cuba, or using only 12 frames per shot. And others seem designed to expressly aggravate Leth: making a cartoon because both directors hate cartoons, asking Leth to refilm the remake set in India (which he refuses, unable to repeat the experience of shooting amid the squalid indigence of Bombay’s red light district).  Clearly, von Trier loves his rules (perhaps as a result of a childhood during which his commune parents refused to set any rules), displaying a coyly sadistic pleasure in coming up with them and an almost childlike indignation when these are broken (“I don’t think it followed the rules”). Of course, all this is in the context of a filmic joke between two depressive (one of them also an alcoholic –  “Vodka works best before noon”?) directors whose mutual admiration is never in doubt. Von Trier mentions that Leth is his cinematic mentor and expresses annoyance that Leth is “unable to make a crappy film” despite the obstructions, acknowledging that Leth appropriates the constraints and uses them as inspirations instead. And indeed each of the five remakes is a film in its own right, possessing a kind of sublime beauty. I least appreciated the Brussels installment, which I found too Euro-art-film-pretentious, but the Cuban, Indian and cartoon segments were enchanting for a reason I cannot pinpoint. The final remake, scripted by von Trier and narrated by Leth, is remarkable for its moving, melancholic reflection on the bizarre cinematic relationship between the two Danes. Thus, skeptical as I was, somehow the movie worked – I must say in large part due to Leth’s onscreen charisma, his patient submission to the younger director’s rules of the game and his weary laid back presence acting as a foil for von Trier’s childlike, over-eager enthusiasm. As my impatience grew with von Trier’s project, admiration grew for the other, veteran director. Nevertheless, the originality of the whole shenanigans and the humour which mitigates the otherwise very experimental nature of the enterprise won me over – not as a von Trier fan, but a fan of this particular facet of his oeuvre.

And what about the ‘boredom’ in the title, then?

Well, Medea, and the Argonauts myth in general,  are in my opinion works best kept away from the hands of ‘Nordic’  film-makers like Carl Dreyer and Lars von Trier. Nordic, did I say? Well, on leaving the cinema I overheard a comment about this production of Medea (shot by Trier for Danish television based on a Dreyer adaptation of Euripides’ play) -“C’est très nordique, non?”

Yes, whatever, I thought. But thinking back, I couldn’t shake off the impression that I had just seen a Dreyer film, vaguely reminiscent of some convoluted witch story I had been subjected to in a European cinema course (turned out it was Dreyer’s Day of Wrath,) and was strongly reminded of Bergman’s The Seventh Seal. So after all, Nordic it was…

There is nothing inherently wrong with staging a Greek tragedy on the marshy Jutland coast with blond Danish children in the cast, but this one just didn’t cut it for me. Instead of high-strung, loud Greek-style drama, wistful languidness and surreal forlorn landscapes pervade this adaptation. Despite the vast expanses of beach and sea, a claustrophobic atmosphere hangs over. The perfervid drama of the original, set amidst the more passion-inducing climes of Corinth here morphs into a closed universe of morose Viking warriors and sorceress females. The new wife of Jason, shot by von Trier in a quasi-soft-porn way, manages without doing much to be such a cloying onscreen presence that one is almost glad when Medea poisons her; as for our taciturn Viking Jason, I am unsure whether the original play calls for his indecision and passivity, or it is a character trait stemming from the Teutonic transposition. These stylistic decisions – the minimalist acting, the sepia colour scheme and out-of-focus camerawork – are probably intended to eschew realism and melodramatic foofaraw or maybe to render the adaptation more to the tastes of Danish TV audiences. But Medea is supposed to be precisely that – a melodrama.  By stripping the play of this essence, von Trier’s production truncates the tragic impact of the characters’ woes and the drama of the Argonauts’ myth. Overall, the huge fan of everything Greek (from tzatziki to philosophy) that I am, I found this adaptation of Medea not so much tragic as listless. And so for a doomed, tragic female heroine I would rather look elsewhere – perhaps to the wrenching Emily Watson in Breaking the Waves (my favourite von Trier film).

The latest von Trier film, Antichrist, is playing soon at the Festival du nouveau cinema. I haven’t yet made up my mind whether to watch it – allergic as I am to fantasy (apparently a talking fox makes an appearance) and to horror, I admire both Charlotte Gainsbourg and Willem Dafoe’s acting.  And from my cinematic experience, genital self-mutilation can be used to amazing effect (Isabelle Huppert sets the bar in La Pianiste). So Antichrist? I might just like it. And that’s precisely the issue – with Lars von Trier, you never know.